The True Story Of How Ernie Got His Start 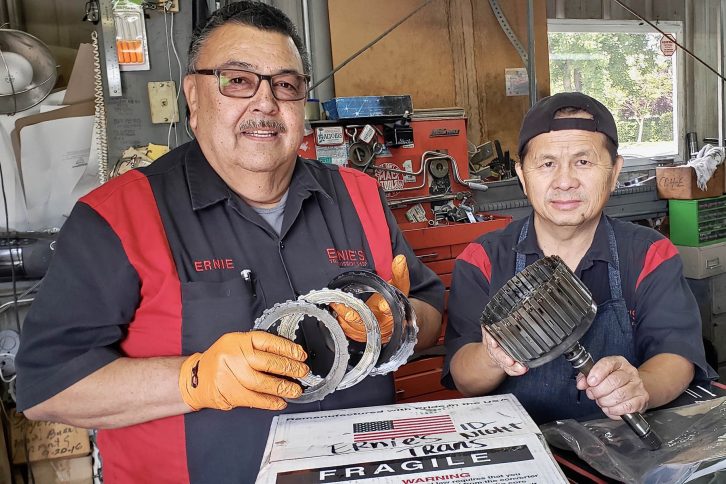 Ernie Amezcua, owner of Ernie’s Transmission, and technician Sang Xiong inside the repair shop at the corner of 14th and O streets in Merced. 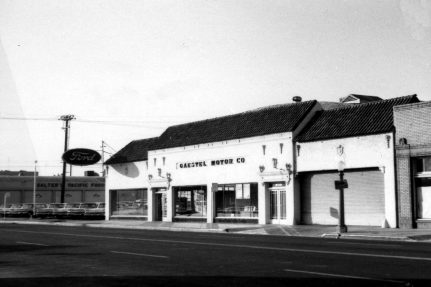 The Gaestel Motor Company was located at 820 W 17th Street. The company was owned by Mrs. Emma L. Gaestel and Robert and Joseph Gaestel. Gaestel Motors was the authorized Ford Dealer in Merced. The business is now gone but part of the original building is still there.

This year, Ernie Amezcua of Ernie’s Transmission Shop in Merced has been contributing regularly to the Times with his views about auto repairs, and offering money-saving tips to help local car owners.

During a recent interview, Ernie recounted the story of how he got started in the business.

It was such a good story … I just had to write a column about it.

Ernie Amezcua was born in Merced, and raised in Planada and Le Grand, along with eight brothers and sisters.

It was all pretty much farm country back then, even more so than today.

And there was plenty of work to do, and lots of farm labor jobs too.

When Ernie was just a kid, his father, Pedro “Pete” Amezcua, was a foreman for several orchard operations. Some of Ernie’s earliest childhood memories include following his dad to the fields in the early morning cold.

“I was only about 9 years old,” he recalls, “but I remember the chill of those mornings, and getting the tractor started.”

One day, as the sun was rising, Ernie’s old man pointed out to the horizon, and said: “Son, if you want to do this for the rest of your life … There it is.”

Young and impressionable, Ernie turned to that horizon, and he looked over the rich farmland — so symbolic of the bountiful Central Valley. He gazed upon the hard labor in the fields that would soon inspire the fight for better pay, safer working conditions, and even the raised fist of solidarity.

Then the words came to Ernie … and he just had to tell his dad … “Hell no!”

The truth was Ernie didn’t want anything to do with farming, or working out in the fields, or being around those labor camps.

But all was not lost.

“The good thing is my dad knew I was mechanically inclined,” Ernie remembers. “He kind of directed me to the tractors, and then to the old cars. He would show me how they operated. My dad was a Jack-of-all-trades, and a master of a lot of them. He was an electrician, a plumber, and he knew how to work on automobiles. So I did a lot of that. … I learned from him, and he also knew I was going to go a lot further than that.”

In those days, there was a wrecking yard in Planada called JD’s Auto Wrecking.

And it just so happened, JD was a good friend of Ernie’s dad.

One summer in the early 1960s — when Ernie was growing into his teen years — JD asked Ernie’s dad: “Hey, what’s your boy going to do this summer? … Send him over, I’ve got work for him.”

So … well … Ernie went to work at the wrecking yard, and lo and behold, it turned out to be a life-changing event.

Or as Ernie recollects: “It was a godsend. … I loved working with all those cars, and everything there. I worked there for quite a few months.”

But it was one particular afternoon that changed everything.

This nice, pretty lady appeared out front, somewhat distraught, and she walked up to JD, and she told him that she had to get rid of her car.

It wouldn’t run, she said, and it wasn’t worth selling.

She was talking about a 1955 Ford Fairlane Crown Victoria Skyliner — a two-door cruiser with a distinct bubble glass top over the front seat area.

At this point, I should share a little history about this car that today is considered both a classic and a rare find.

The year 1955 marked the first use of the “Crown Victoria” nameplate by the Ford Motor Company. The car was distinguished by a wide stainless-steel band “crowning” the roof. The body style was considered an interpretation of a horse-drawn carriage, or a “Victoria.” In addition, the “Skyliner” model featured a fixed, smoked, acrylic glass sunroof that inspired the car’s nickname — “Glasstop Vicky.”

The model lasted only two years as customers realized it was troublesome to keep the car’s interior cool, and sales decreased.

However, for a teen like Ernie in 1963 or ’64, this Crown Victoria was just plain cool.

When the lady had the car dropped off, Ernie was blown away.

It was green and white, and very, very sleek. More importantly, it was exactly what Ernie wanted.

“How much do you want for it?” Ernie asked JD right away.

“The transmission is shot,” JD replied.

Undeterred, Ernie kept asking over and over about the car.

So JD lit a cigarette, and smoked it for awhile as he thought about the car, and Ernie’s desire.

Back then, $200 was something like $2,000 in today’s terms, and Ernie looked defeated for the moment. But JD cheered him up by saying, “Don’t worry, we’ll work it out.”

So in the days that followed, Ernie would stay after work, and then go back to work on the Glasstop Vicky that was parked in the yard.

He didn’t know all that much about transmissions, but he found some Chilton auto repair manuals that JD had on the shelf of his office. He figured things out as he went, and managed to pull the transmission back and started to open it up.

Suddenly he saw a little broken piece fall out from the front end of the transmission gear pump where the torque converter fits into. He pulled the pump, and realized to his heart’s delight that this little gear part was probably all the Crown Victoria needed to run smooth again.

So he got his dad to drive him up to downtown Merced where the Gaestel Motor Company was located on the corner of Main and O streets, near where the McAuley Lincoln dealership is today.

Ernie entered the Parts Department and talked to Julio Nannini (the father of Dave Nannini who would open up Dave’s Tire World years later just down the street).

“I told him that I didn’t have that kind of money on me,” Ernie remembers. “I said I would have to come back when I had the cash. But then, we were walking back to the car, and all of a sudden, this mechanic named Ruben saw my dad, and shouted out: ‘Hey Pete!’”

Pete explained to Ruben why they were there, and Ruben’s eyes lit up, and said, “You know I got some brand new gears that someone left behind a long time ago. They should do the trick.”

He was right, and Ernie couldn’t believe it when Ruben said he was more than willing to let the parts go for a couple bucks. He even threw in a free O-ring Ernie would need to fit the pump.

And that’s the story of Ernie’s first transmission job.

“I put the thing back together, I put it back into the car, I filled it up with oil, and the car ran like a champ!” he says today. “That was my car.”

Ernie would drive his Glasstop Vicky to Le Grand High School for about seven glorious months. But you know, it’s only fitting to this story to mention that another guy — a friend of Ernie’s dad — would soon take a liking to the beauty that Ernie was driving.

Ernie wanted to keep the car, but the persistent gentleman kept asking and asking, and then he offered to buy it for $1,500.

That was a pretty nice return on a $200 investment. So Ernie let his Glasstop Vicky drive away.

After high school, Ernie would go on to study at Merced College. However, his studies were cut short when he was drafted into the Army during the Vietnam War.

His parents, Pete and Josephine, would go on to open up a couple of small businesses in Planada — a bargain market and a pool hall. Pete was also a great guitar player, and in his spare time, he led a popular mariachi band.

Ernie would make his way back to the Merced area, safe and sound, and eventually he started his own transmission business.

It was a venture that would last for more than 40 years.

Today, every once in a while, Ernie still daydreams about that Glasstop Vicky he once owned. He shakes his head and wonders what that car would be worth now.

Just out of curiosity, I did a quick check on the Internet, and I found a fully restored Crown Victoria Skyliner — with the “rare glass bubble top” — going for a crisp $67,000.

What happens when City Council chambers become a zoo?