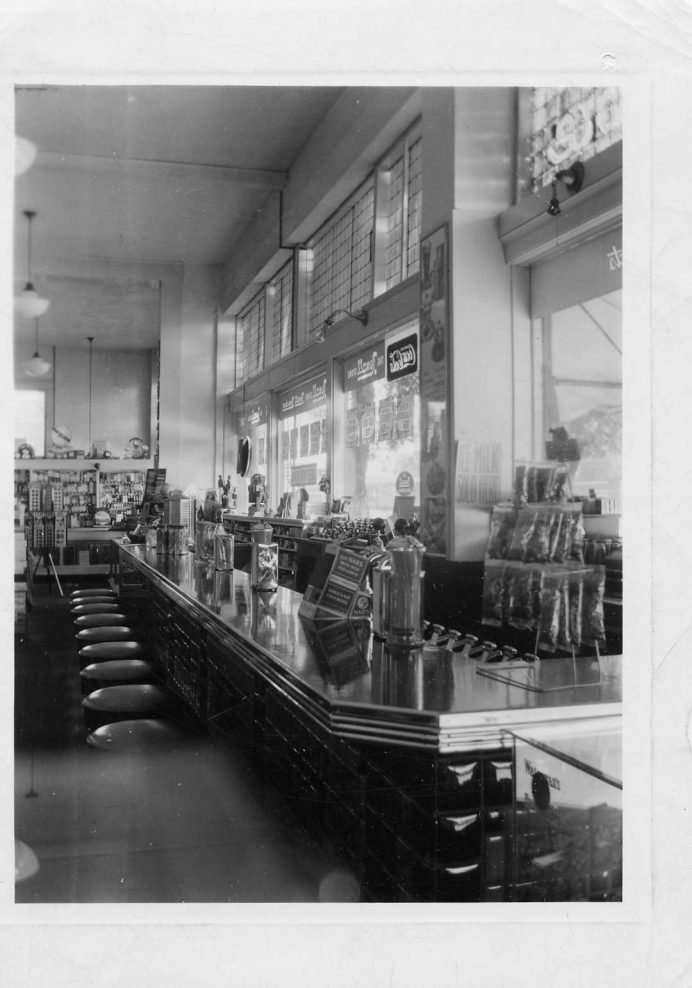 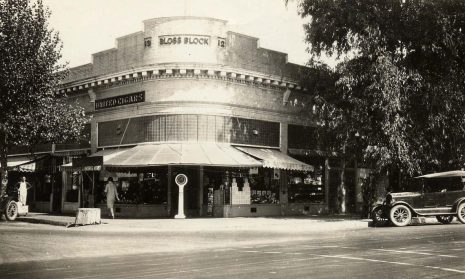 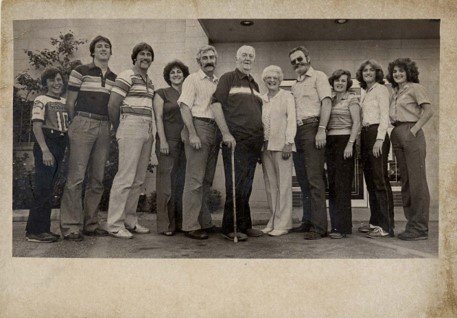 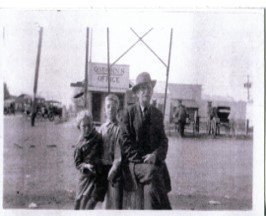 This is the story of the Heller family in Atwater, as told to Vicki Carne, long-time Secretary of the Atwater Historical Society.

Leading up to that was the family’s move from Wisconsin to California.

In 1905, Mr. and Mrs. Elias Heller and their son, E. A. Heller, moved to San Jose, California from Wisconsin due to Mrs. Heller’s poor health. Elias started work in Santa Clara as a blacksmith.

Sadly, Mrs. Heller died from tuberculosis shortly after the San Francisco earthquake in 1906.

Elias was leery that another earthquake might follow the devastating 1906 quake, so the family eventually moved to the Fresno area and lived in several different towns before moving to Atwater.

In 1908, E. A. entered the University of California School of Pharmacy at San Francisco. He graduated in 1910.

While attending college, E. A. Worked at Brommel Pharmacy in San Francisco. He stayed all night at the pharmacy so that if there were any nighttime customer requests, he could take a streetcar and deliver the prescriptions.

As a little boy, Jim Heller remembers his father, E. A. Heller, working in a few Fresno pharmacies and moonlighting as a Victrola phonograph salesman while living in Fresno County.

Electricity had come along, as well as the paving of some of the dirt roads. Horses and buggies remained in use until the early 1920’s, although there were a few automobiles on the roads as well.

In 1912, the town of Atwater suffered a terrible loss when a fire started in the meat market and all the businesses between Third and Fourth Street in town burned down. The only business that survived on the block was a small grocery store owned by the Williamson Family which later became Lawrence Grocery Store.

Also in the same year, George Bloss Sr. paid $21,000 to have the “Bloss Block” built. It was a large building and housed several businesses.

In 1917, E. A. and his wife, Marguerite, moved to Atwater. The population was 596. At first, Marguerite refused to move to Atwater because there was no home to live in. Finally, Mrs. George Bloss Sr. had a home built on Broadway for the couple. They rented the home from her for several years and then purchased it.

E. A. purchased a small store for $250 from Dr. Kinney in the Bloss Block on Third Street and Front Street (Front Street turned into Highway 99 then Atwater Blvd.). The store was 18 ft. x 30 ft. George Bloss Sr. was E. A.’s landlord.

This is where E. A. followed his dream and became Atwater’s first pharmacist. He soon became known to everyone as “Pop” Heller.

In 1917, Pop (E. A.) was awarded the Rexall franchise during his first year in business in Atwater.

Meanwhile, E.A’s father, Elias, remained a blacksmith and owned his own shop in Atwater until 1921.

The Atwater Rexall Drug Store expanded twice while occupying the entire highway frontage of the building. E. A. established the business, remaining in the Bloss Block for 35 years.

A frightening event took place in 1918. There was a terrible flu epidemic. Jim and his sister, Rosalie, wore masks over their noses and mouths for protection.

While Jim and Rosalie were growing up, Pop loved music and played the banjo and guitar, and his band played at all kinds of local events.

As a young man, Jim had a girlfriend who lived in Oregon. On a trip to see her, he stopped off at his sister’s, Rosalie’s, place. Her roommate was Peggy. It was love at first sight. Jim never made it to Oregon.

Jim married Marjorie “Peggy” Gernreich in 1937. They had two sons, Jim Jr. and Brian, both of whom shared their father’s and grandfather’s enthusiasm for the drug store.

When Jim and Peggy lived in Atwater, the population was approximately 1200.

It was only natural that Jim Heller, who spent much of his youth in the drug store and who had also graduated from the University of California School of Pharmacy, should eventually go into business with his father.

The drug store had a soda fountain. There were nine round swivel stools attached to the floor. Some of the first ladies who managed the soda fountain were Clara Mello, Ann Frago and Mary Sai Freitas.

In the 1940’s it was a favorite hangout for the kids in Atwater, who had a few nickels and dimes to spend on a milkshake, banana split or a lemon-lime fizz. It was also a popular place to stop for people traveling on Highway 99. The store dispensed prescriptions and nonprescription remedies. It was the only source in the area for veterinary medicines up until the 1950’s.

If you heard the clang of a cow bell, you knew your prescription was ready. This tradition lasted 69 years.

Jim joined Pop in the development of the Heller subdivision as the need for a new housing program arose in Atwater. The subdivision consisted of 60 homes and a public playground. The playground was called Heller Park.

One of the stories passed through the generations was that Peggy said the first home they moved to in Atwater was on Elm St. and Locust St., and it was a “shack”. The first night, the first visitor they had was George Bloss Jr. They all sat on boxes and ate minced meat pie.

Peggy enjoyed entertaining. After they moved to their new home on Third Street in 1945, Peggy would have Sunday dinners every week with all the family. During the Christmas holidays, the Heller home had an open house for friends and family.

There was always a roasted pig centerpiece on the table, and Joe Redell supplied the pig for years.

Their home on Third Street was originally built for Mrs. Christine Bloss’ brother. When Castle Air Force Base opened and young families would come to town and needed temporary shelter, Jim and Peggy would open their home to them. They helped many families, as well as allowing the lifeguards who worked at The Plunge Pool to stay with them. The Heller’s took over The Plunge for 12 years before it was demolished.

In 1951, a new building on Broadway right across the street from Pop and Marguerite’s home became the new site of the Atwater Rexall Drug Store. The new location was 40 ft. x 95 ft.

The building was air conditioned, was well lit, and featured piped-in music. Some of the original ice cream tables and chairs purchased in 1917 were set up in the Prescription Department for customers who preferred to sit and wait for their prescriptions.

At one time, the drug store had the distinction of being the oldest continuous business in Atwater and Pop Heller the oldest practicing pharmacist in Merced County.

Pop Heller died in 1955. Son Jim continued Pop’s dream and operated the Atwater Rexall Drug Store until 1986.
Jim was a tall man, and the townspeople liked to call him “Big Jim”. Big Jim and Peggy were involved in many organizations and projects that helped Atwater thrive.

In 1956, Big Jim opened another Rexall drug store in Winton.

Peggy was the first chairman of the Atwater Parks and Recreation Commission. She became a regular visitor to the State Department in Sacramento as a Recreation Commissioner to get much needed funds for Atwater. The group was able to obtain land from Clark Ralston to build what is now Ralston Park.

At a ceremony in Sacramento, Peggy was honored as “Woman of the Year”, representing Merced County.

She was a school teacher and much loved by the community. There was an elementary school built in her honor, Peggy Heller Elementary School.

Jim and Peggy’s sons, Jim Jr. and Brian, worked with their dad at the drug store.
Jim Jr. handled all the accounting.

Brian, who acquired the nickname “Bucky”, was also a pharmacist, making him the third generation of pharmacists in the Heller family to follow Pop’s dream.

As a gesture honoring their friendship with the Bloss family and showing their love of the Bloss Home, the Heller family donated Pop Heller’s beautiful oak desk and chair that was used in the pharmacy to the Bloss Museum, Marguerite Heller’s vintage couch, and a wood and glass cabinet full of old medicine bottles and other containers.