The Mondo Building: A Cornerstone Of Downtown Merced 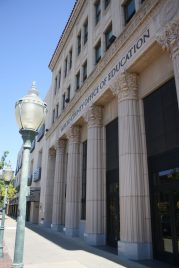 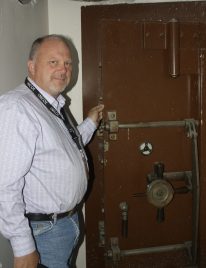 The bank vault is still intact with Joe Stoneman standing beside it. 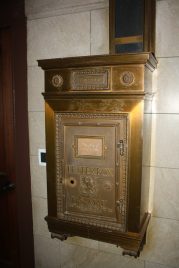 The original mail box inside the Mondo Building. 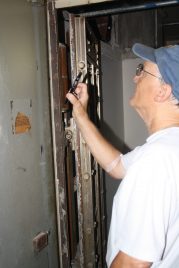 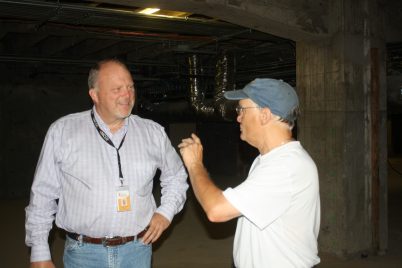 Reno Martinelli, right, who is a local history buff looking for tunnels under Downtown Merced, asked to see the basement of the Mondo building. Joe Stoneman, the man in charge of facilities for the Merced County Office of Education, is seen here talking to Martinelli.

It sits as a cornerstone of Downtown Merced. Known to most locals as the Mondo Building on Main Street.

Facing Bob Hart Square, the Mondo Building looks like it had been plucked out of Rome, with its beautiful columns climbing toward the sky.

It has been there since 1928, built by Gene Mondo as the local home of the Bank of Italy. Later when Italy became part of the Axis, the name was

changed to Bank of America. It has since housed County Bank, and then UC Merced; however, now it is owned by the Merced County Office of Education (MCOE) which bought the building three years ago. The building then went through reconstruction for almost two years.

The Mondo Building is certainly one of the finest buildings ever built in Merced, with only the very best materials. Many of the walls were done in marble. Gene Mondo spared no expense, and he had the money to do it just before the stock market crashed in 1929. MCOE bought the building for a pittance considering its actual value. Only $3.3 million for a building which would have brought $7 to $10 million in early of years when Downtown Merced was booming. However, the years have taken their toll on Downtown Merced as the major hubs, like Sears and J.C. Penny’s, moved to Westgate and the Mall.

The Mondo Building has undergone several retrofits as years went by. It had to be restored to withstand an earthquake and the foundation and electrical systems were either improved or replaced. Even so, there are remains of the original building which can be seen if one goes down into the basement of the building. The original vault, which must have stored millions of dollars in its time, is still there with its four inch thick steel door.

The building now has a large conference center on the ground floor. There are about 30 members of the staff who work in the building full time. It is three stories and a basement, which probably housed double that number of staff at its peak.

It is estimated as being about 33,000 square feet of space. At one time the entrance was on Main Street, but now it is on Canal, and if one looks closely the name Bank of Italy can be seen above the entrance.

Joe Shoneman, the director of Facilities for MCOE, guided the Times on a tour of the building with Reno Martinelli, a former teacher at Planada School, but a historian at heart. Martinelli has worked to bring back the history of the historic tunnels under downtown Merced.

The tunnels, if they once connected to the Mondo building, are long gone and sealed over with concrete. However, in adjacent buildings, there are clear signs of the tunnels being present which once lead from Main Street to China Town.

Even though the trip did not produce any new tunnel discoveries, it was very worthwhile in terms of bringing to light, the grandeur which was once Merced.

With the restoration of the Tioga and the El Capitan Hotel, and now The Mondo Building, that grandeur is on its way back in Downtown Merced.

From Ship to ShoreMercedMerced County