‘The Community Up There Is Strong’

Heavy wildfire smoke can be seen from Mariposa during the early hours of the evacuation last weekend. The Oak Fire quickly grew to become California’s largest wildfire this year. 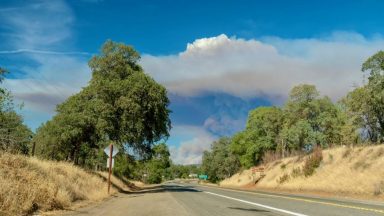 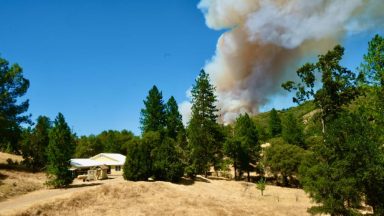 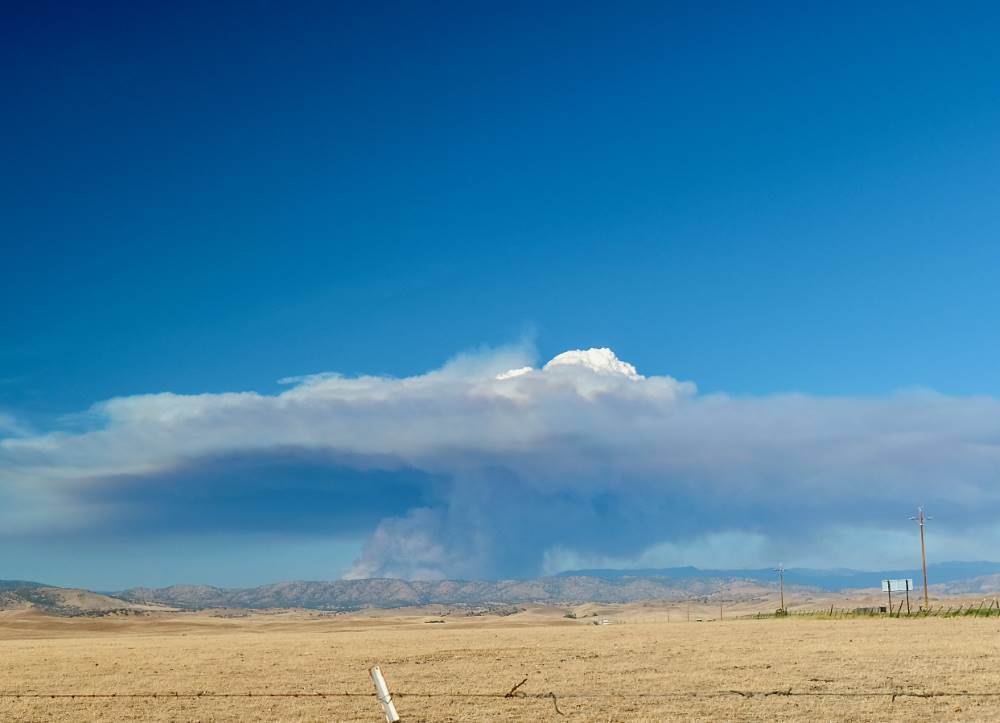 Editor’s Note: Ian Whitaker of Mariposa is a new Times reporter who was set to start working on Aug. 1. His move to Merced was accelerated due to the Oak Fire that exploded in size last weekend, forcing thousands of residents to flee mountain communities. This is Ian’s account of his own family’s evacuation.

Up in the foothills we’re used to fires popping up every now and then. So when our neighbor called us from her house further up the hill and told us there was a fire over in Midpines a couple miles away, we didn’t think too much of it. There had been a fire in the same spot a few weeks ago that was taken care of quickly.

We changed our minds a few minutes later when we went outside and saw the dark smoke floating over the hill.

Not a lot can prepare you for seeing such destruction so close to where you live. Even if you’re used to living somewhere where wildfires are common in summer, it’s terrifying to witness the raw power of nature firsthand.

This fire was a lot closer than the one weeks earlier, and we could see the smoke billowing up just behind a nearby ridge. Clearly it was going to be a big one.

Immediately we got out the evacuation box with important stuff like passports and insurance papers. Then we started gathering enough supplies and clothes to last us a week. It didn’t take long to load them and our pets in the cars, which was a good thing as it hadn’t even been half an hour before we got the order to evacuate.

Still, you can only be so prepared. In all the confusion, things inevitably go wrong. In the scramble to get everything together and with the noise of sirens and low-flying planes, one of our cats got scared and hid in a crawl space. There was no way we could get to her in time, so we had no choice but to leave her some food and water and hope for the best.

We couldn’t use Highway 140 to escape because of the fire, so we headed south to Bootjack. The local market there was full of people, and there was a line for gas as families tried to fill up before getting out of the area. A few people who were out when the fire started tried to get home but found some of the roads already closed by emergency services. The roads were chaotic for a couple hours after the first evacuation orders were given, but soon enough resources were made available and shelter locations were announced – Mariposa Elementary for families and pets, and the fairgrounds for large animals.

We passed a lot of emergency vehicles along the way, but we were able to get down to my grandparent’s house in Merced without any issue.

Evacuation comes with its own set of problems, though. Either you stay at a shelter, try to find an available hotel room, or if you’re lucky and have family living nearby, you double up with them. All of a sudden you’re moving all your stuff into a relative’s spare room and learning to adjust to the rhythm of someone else’s life. Dinner times and chores change, you’re always squeezing past each other in narrow hallways, and you have to figure out who gets the spare bed and who has to sleep in the recliner. It’s really hard on animals, who don’t even understand what’s going on. The extra time with friends and family is a good thing, though. Not everyone gets that luxury during a disaster.

As of Tuesday night, the Oak Fire had already burned more than 18,000 acres, destroyed dozens of homes and is currently threatening thousands more. Journalists from all over the country are flocking to Mariposa and emergency responders from a dozen different agencies are working around the clock to contain the blaze, but it will take time to get such a large fire under control.

Luckily for my family, we found out the next day that the fire had spared our house and our terrified cat, but others weren’t so lucky. For now, there is nothing for anyone to do but wait and hope that the weather makes it easy for the firefighters.

A number of neighborhoods are still under evacuation advisory, and many people are nervously checking the news and Internet for any new information. But the community up there is strong. They’ve dealt with this kind of thing before, from the Detwiler Fire in 2017 and Ferguson a year later, which burned 95,000 acres before all was said and done.

Like every other big fire in a small community, the pain will last long after the flames are put out and the TV cameras are put away. That didn’t stop the community from coming together then, though, and it won’t stop it now.