The Benefits Of Raw Honey 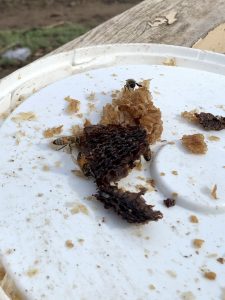 Sore throat? Trying to fight off your seasonal allergies or cold and flu symptoms? Look no further than your local bee farmer to overcome those yucky and irritating milder symptoms.

Providing a natural remedy to fight some of the symptoms of the common cold and the flu proves to be easier than you would think.

One of the most common symptoms of an incoming or present cold is a sore throat and excessive coughing. As the throat becomes dry, and congestion ensues, great discomfort and pain will leave you searching for a quick remedy.

Ingesting a small amount of raw honey can act as a natural remedy, soothing and calming the throat without the typical side-effects that come with over-the-counter medicine.

One only needs to consume one teaspoon of raw honey one to two times a day to reduce inflammation and calm the throat.

The high viscosity, or thickness, of honey, also provides a protective barrier that can help prevent viral and bacterial infections.

At its core, raw honey is the most delicious option to calm a sore throat.

For years, raw honey has been ingested for allergies. The theory behind consuming honey as a way to build immunity resembles that of an allergy shot.

When one is given an allergy shot, their body is introduced to a certain allergen in a small dose. Over time, the body becomes immune to the allergen as their body has become accustomed to its presence.

The same is done with raw honey, as it contains traces of pollen. Taken in small doses, the body can slowly begin its immunity to the pollen.

Hailing from the Central Valley, one can agree that seasonal allergies can be an annoyance. With the rebirth of Spring come tree, grass, and ragweed pollens, some of the most common allergens that cause nasal congestion, sinus pressure, runny noses, itchy, watery eyes, scratchy throats.

Although over-the-counter allergy medication can temporarily relieve certain symptoms, they can introduce your body to a variety of side-effects including dizziness, nausea, dry mouth, and drowsiness.

Honey is rich in antioxidants such as polyphenol, a phytochemical that helps reduce the risk of diseases. Antioxidants are important as they neutralize free radicals or unstable molecules that can damage the cells in your body. Disease will result when a great number of cells are damaged or killed off by free radicals.

As the antioxidants in honey come to play, less damage will be done to one’s cells, reducing the risk of heart disease, cancer, strokes, heart attacks, and diabetes.

The kitchen is cookin’ inside Merced’s Italo-American Lodge

The Bus launches micro transit in county’s west side communities