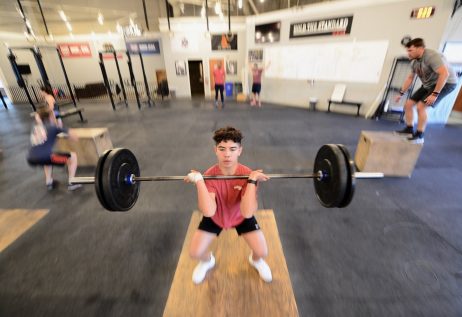 Ethan Ortega, 15, performs an intense fitness routine at CrossFit Merced in preparation for a chance at making the finals of the worldwide CrossFit Games this summer. 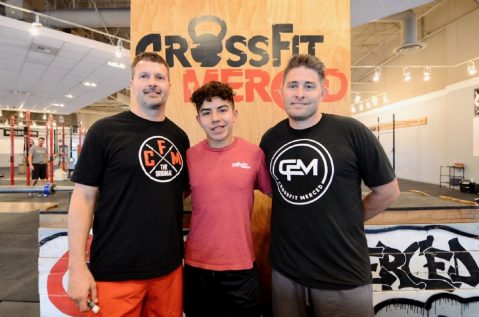 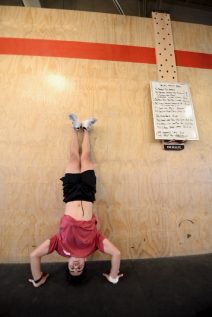 Ethan Ortega works on some handstand pushups while in training for the CrossFit Games.

Just last summer, a slim-looking Ethan Ortega was looking forward to his freshman year at Merced High School, and thinking about getting into shape.

Ortega’s mom and other family members convinced him to join up with them for a three-month boot camp session at the Merced CrossFit gym.

“I wasn’t playing sports or anything,” Ortega told the Times. “My mom didn’t think I was going to stick with it, but I ended up doing all three months, and I just kept going.”

It was more like Ortega took a deep dive into an intense fitness lifestyle.

And it didn’t take long for the CrossFit coaches to realize they had an exceptional athlete on their hands.

“He has a good motor — that’s what we like to say,” said Matt Davis, the owner and head coach at CrossFit Merced. “He never gets tired. He has really good cardio. He moves the barbell really well, and he knows how to move his body. We knew something special was happening, but it wasn’t until just a few weeks ago that we found out he ranks up there with the world’s best in his age group.”

Today, in an amazingly short amount of time, the 15-year-old Ortega finds himself close to competing in the finals of a worldwide competition known as the CrossFit Games.

CrossFit is a style of workout that concentrates on high intensity, variety and functional body movements — all with safety in mind and adaptation for people of all ages and abilities.

“We train for everything to be ready for anything,” said John Sweigard, one of the onsite coaches.

Exercise routine is the enemy for CrossFit fans.

“We do a little bit of everything,” Davis said. “We sprint, we rope, we do gymnastics, we do Olympic weightlifting. Every workout, every single day is going to be different, with a different designed stimulus, a different time domain, and a different task. We want our clients to be fit for life.”

The business has been open for nearly a decade, having started out on Main Street and then relocated to the north Merced location four years ago. It’s an independent enterprise, but all gyms with the CrossFit name are considered an affiliation with the worldwide brand. That brand was started more than 20 years ago in Santa Cruz by a gymnast named Greg Glassman who decided to get creative with his strength exercises.

The workouts became highly addictive, and they gained popularity.

“Folks who come in here realize how much fun it is,” Davis said of his Merced location. “They all have the same goal, and we are all cheering for each other.”

He said it was no surprise to see the young teen Ortega “get hooked” on the training.

Said Ortega, “At first, everybody is real supportive of each other and they are cheering you on, but then I started to realize I was getting some incredible results in a relatively short amount of time. It wasn’t like going to a typical gym.”

Davis smiles and says, “We have some workouts that are done in two and half minutes and it’s the worst feeling you have every had in your life — but then 10 minutes later, you are like: ‘This is the best thing I have every done!’ … We really believe that intensity is the thing that drives adaptation in our bodies the best.”

In the fall, the “Crossfit Open” occurs, and that’s the start of a worldwide competition where clients of the fitness program can register online and show what they can do through documentation and video tape. Everybody does the same five workouts — CrossFit style — and then they are judged and ranked.

Ortega signed up just for fun, and sent in his stuff.

A few weeks later, his Crossfit Merced coaches were blown away when the results came in and Ortega ended up No. 117 in the world for his teenage level — and that’s out of thousands and thousands of contestants who signed up.

This week, the top 200 athletes in each age group division will begin a series of events in the competition for a qualifying spot at the 2020 Reebok CrossFit Games in Madison, Wisconsin, starting July 29. The event is going to be televised by ESPN.

CrossFit Merced plans to do some fundraising to help Ortega get to the event if he qualifies. But first he has win a coveted spot.

Go for it Ethan. Put Merced on the map!

We could be seeing the kid on TV this summer.

A look inside of a Merced County COVID-19 testing site

Schools to remain closed for rest of school year