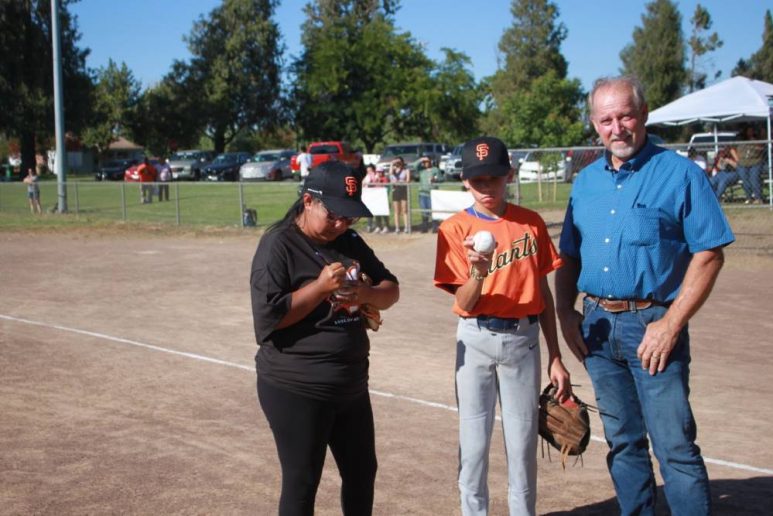 Supervisor Pareira threw out first ball to Willie Mac Award winners, Jonathan Flores and Patty Madriz. They signed the balls and returned them to him 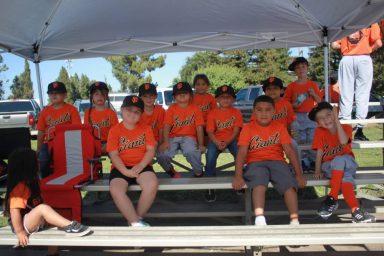 The T-ball team is ready to take the field for opening ceremonies. 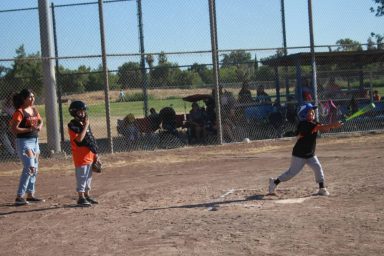 The first hit of the season. 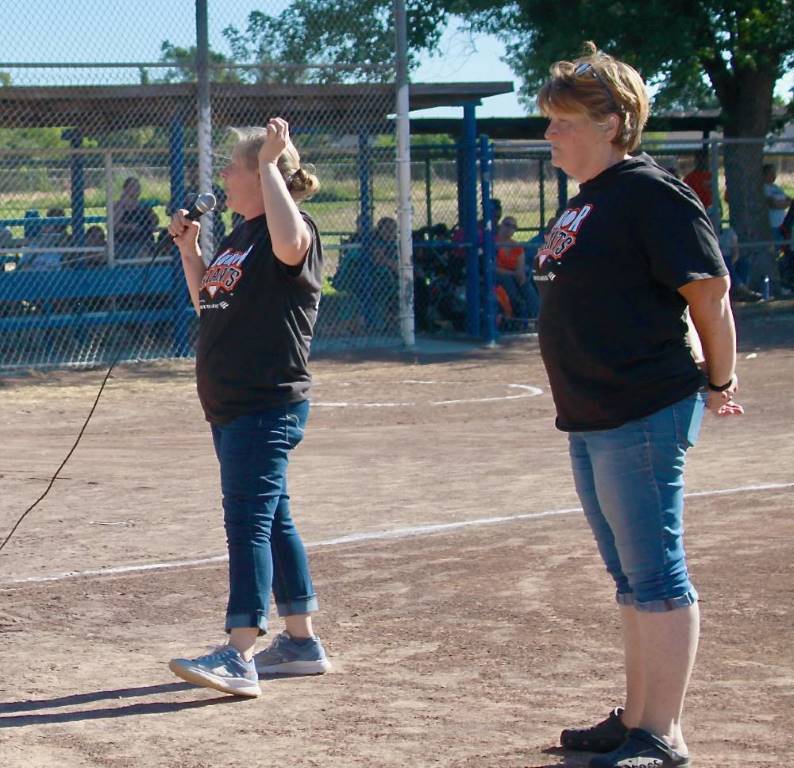 Merced County Supervisor Lloyd Pareira at this week’s board meeting had some nice words for two women who are keeping the Junior Giants youth baseball program alive and well in the community of Winton.

“Kelly Thomas and Susan Ochoa,” Pareira pointed out in his closing comments. “These two ladies work tirelessly for that community, creating opportunities for the youth. They have 252 young people showing up to play ball under the Junior Giants program.”

Last week, Supervisor Pareira took the opportunity to address the crowd and throw out the first pitch for the Opening Day of Winton Junior Giants baseball. That’s where he met up with Thomas and Ochoa, who serve as Junior Giants Commissioner and Assistant Commissioner, respectively.

While the Junior Giants organization provides uniforms and gloves for the teams, Pareira said he learned that Thomas and Ochoa work hard with other volunteers to raise money for the program, often digging into their own pockets for supplies. They also take kids to a Giants game at the end of the Junior Giants season.

At the game, Pareira told Winton residents: “It’s all of you who make the community of Winton a great place to live. We have over 200 kids playing baseball this year. There is also over 30 volunteers helping with coaching, and team parents who help the coaches and make sure snacks are brought to each game. Atwater High School and Winton Middle School students are volunteering in the snack bar and helping with teams. These young volunteers earn community hours and are working toward earning a cord when they graduate. There are also parent volunteers doing the cooking so the snack bar doesn’t run out of hamburgers and hot dogs.”

Pareira threw out the first pitch to last year’s Willie Mac Award winners: player Jonathan Flores and Coach Patty Madriz. The Willie Mac Award is given by the Junior Giants league and goes to a player and coach who go above and beyond to help their organization for the season.

The Junior Giants program is sponsored by the San Francisco Giants organization and is based on the Four Bases of Character Development: Confidence, Integrity Leadership and Teamwork.

Each county runs its own program with League Commissioner Michael Sanchez of the Merced County Recreation Department overseeing Planada, Beachwood- Franklin and Winton programs. The Junior Giant program is free to all kids and is a great opportunity for them to learn about sportsmanship, have a fun time and get out of the house and do some exercise.

There will be games every night of the week from July 5 through Aug. 4, with games starting at 6:15PM. Closing ceremonies will be held Aug. 4 at 7PM, following the Senior Round Robin games at 5:30PM. Everyone is invited out to watch the games and root for favorite teams.