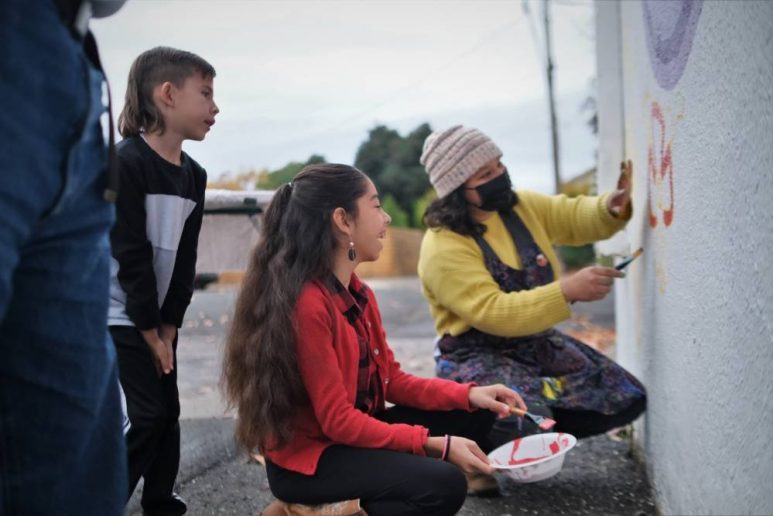 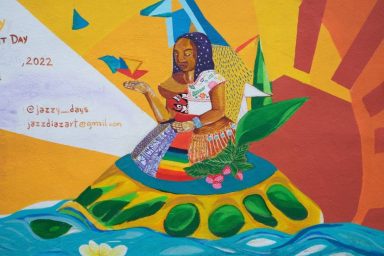 An image of ‘Sky Woman’ is a main focal point of the mural. 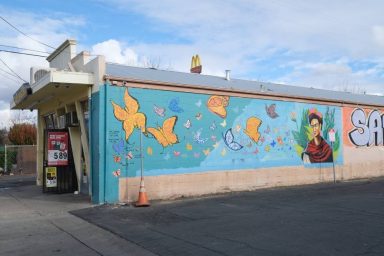 The Frida Kahlo mural at R and 12th streets was used as an inspiration for the one being painted on K Street. 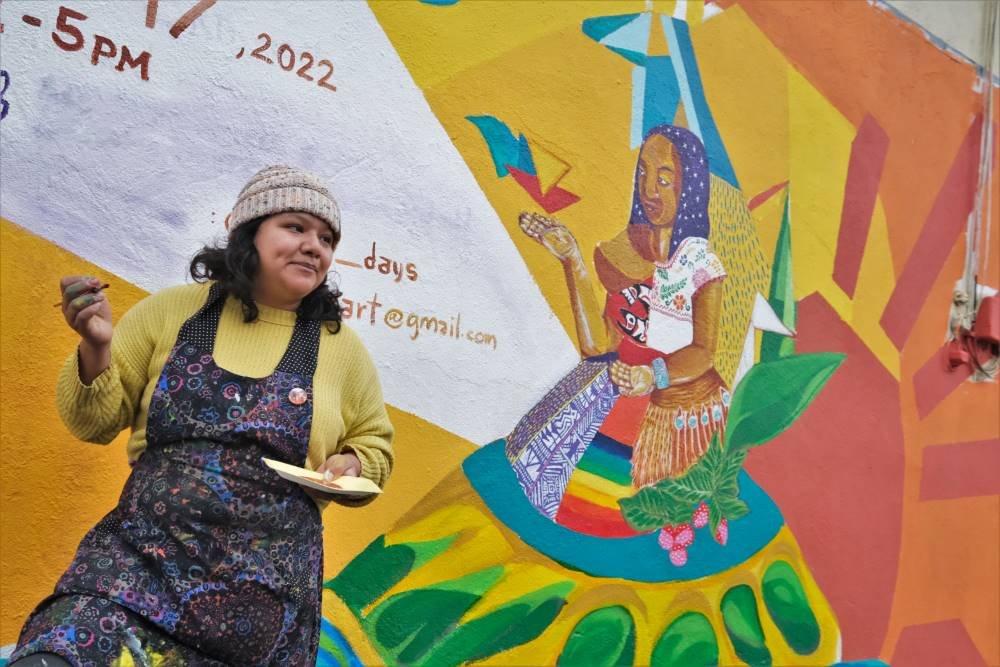 Jazz Diaz is the artist behind community mural project on K Street in downtown Merced.

A mural-in-progress on the side of the Merced County Times’ office at 2221 K Street is part of local artist Jazz Diaz’ effort to beautify Merced and shine a light on violence in the community.

Diaz has been painting the mural for several months now. On Saturday, she held a community paint day where she invited everyone to come and paint flowers and grass.

The crummy weather wasn’t enough to stop some people from coming – including City Council member Jesse Ornelas and his family – but when the sprinkling turned to a downpour around 2 p.m. Diaz was forced to reschedule.

“I like to paint using bright colors,” Diaz said on Saturday. “I love that sense of beauty on a wall that before was just kind of blah.”

The idea for the project began when Diaz saw an unfinished mural of Mexican painter Frida Kahlo on the side of Sam’s Smoke Shop near R and 12th streets. Diaz didn’t know who started the mural, but she decided to finish it, painting Kahlo’s face and later inviting the community to add butterflies symbolizing the hardship and resiliency of migrants. This was in 2017, around the time when the Trump Administration tried to put a stop to the Deferred Action for Childhood Arrivals program, also known as DACA. The program aimed to help the children of undocumented immigrants avoid deportation and acquire work permits. It’s been tied up in federal court since then.

“That was one of the first murals I facilitated on my own and it had no budget,” said Diaz. “This is the second time we’ve done a mural like this and a lot of it is funded by the community.”

The project is not sanctioned by the city nor is it receiving any kind of money from grants. Diaz wants it to be primarily community driven, making use of the talents of local people.

“My husband bought me a ladder, and my friend Patty gave me some leftover paint. I have a friend Mao. He gave me some of his nice paint,” she said. “It’s more of a grassroots type of thing.”

The mural she’s working on now is partly a memorial for Heaven Murillo, a Golden Valley High student that was killed in 2017. 34-year-old Benjamin Goddard pled no contest to involuntary manslaughter and was sentenced to nine years in prison for her death, but he is scheduled to be released in January after serving less than half the sentence.

Some in Merced, like Diaz and Murillo’s parents, believe Heaven was denied justice due to Goddard’s light sentence. The Merced district attorney maintains there wasn’t enough evidence for a harsher sentence. Local artist Cindy Garcia will paint Murillo’s memorial.

Diaz’ portion of the mural is a representation of the concept of Turtle Island, an indigenous folk story about the creation of the planet. In the story, animals gather soil on the back of a turtle, which grows and grows until it’s large enough to support all life on Earth. The woman on top is Sky Woman, who plays a central role in the story. The inspiration for her came from Robin Wall Kimmerer’s book Braiding Sweetgrass, Diaz said, and her clothes are decorated in the styles of several Native Nations from North, Central and South America. She has incorporated other elements as well, including an abstract red hand representing missing indigenous people which doubles as a sunrise within the painting.

“This piece is a metaphor to hold a home for the Native victims that have experienced violence and have been taken,” Diaz said. “As an artist I use bright colors, nature, story telling references and textures to create a sense of beauty and movement in art to hold space for difficult subjects, history and culture.”

Several local artists have come by every now and then, she said, adding details here and there. Gradually the mural is coming together, and Diaz is planning another community paint day on Dec. 17, from noon to 5 p.m.