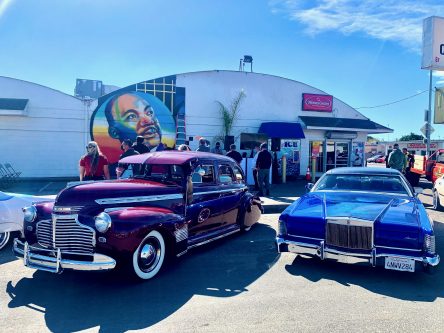 The community celebration included a DJ performance, live music and a car show. 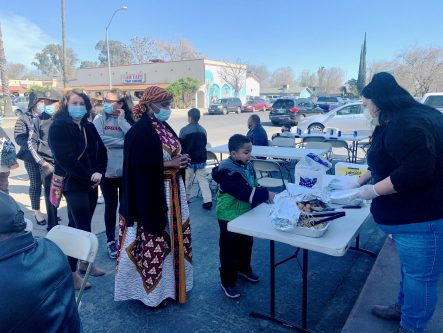 Free food and beverages were donated by Sam’s Cafe and the Merced Food Center. 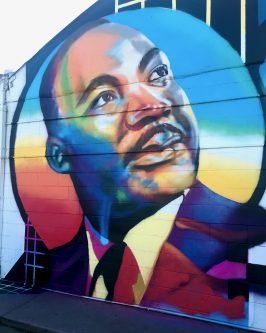 A close-up look at the finished image of Martin Luther King Jr on the side of the Merced Food Center.

The portrait of King, which is part of a greater mural featuring farm labor union leader, Cesar Chavez, was celebrated with free food and beverages from Sam’s Cafe and the Merced Food Center.

At 1 p.m., a car show was parked on the side of the street as a DJ played music for all to enjoy.

Finishing touches were made on the mural as the afternoon continued.

The figure of King, which was completed just as Black History Month comes to an end, was brought to life by Joel Aguilar, a Livingston mural artist, and member of Third Hour Collective.

“I am happy to be working with my community and the NAACP here in Merced,” Aguilar excitedly said. “I feel blessed to be honoring Martin Luther King in this area. The south side of Merced is a little bit neglected and I am hoping my artwork speaks volumes here. Giving the walls a splash of color in our community can highlight someone’s day and encourage others to carry on. I want people to see this as a positive message, I grew up with no art in my community, and I feel like seeing something like this will empower some of us.”

Success through peaceful demonstrations is the overall message community members hope to invoke with the mural that will feature groups of people bridged between the portraits of Chavez and King.

The legacies of both men stand united through peaceful protest and a resilience to fight for change no matter the circumstances. Cesar Chavez fought for the rights of farm workers throughout California while King advocated for civil rights throughout the United States.

Chavez admired King and followed his guidance of peaceful protest when organizing marches. Mural supporters say the two men stand tall as a representation of the strengths we should go to when looking for change within our communities.

The Martin Luther King Jr Committee was present to celebrate the unveiling of King’s portrait.

The mural will continue to be finished as more funds are donated to cover the costs. Residents hope this will only be the start of future murals throughout Merced.