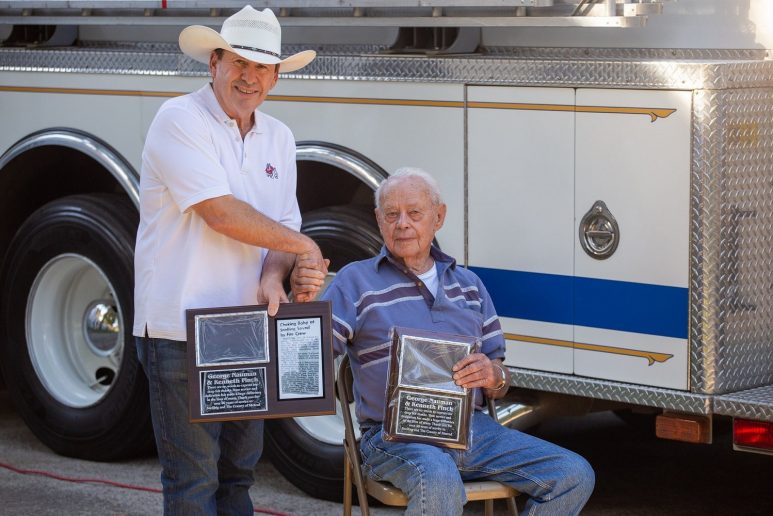 George Naumann and Lloyd Fagundes shake hands as they hold onto plaques commemorating the event. 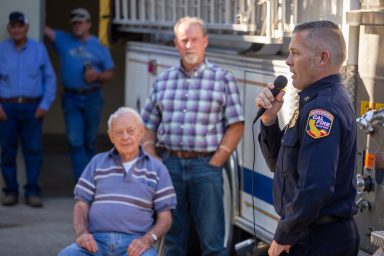 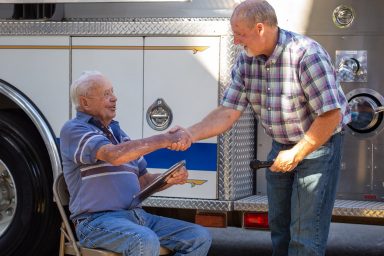 Lloyd Fagundes, as a senior citizen, finally got to shake the hand of the man who saved his newborn life 65 years ago.

The hero was none other than 95-year-old Snelling resident George Naumann, who was a volunteer firefighter in the right place, at the right time, one night back in February, 1956.

In remembrance of his service to the community and the heroism on display back then, Naumann was honored by local leaders and Fagundes himself during a ceremony on Monday evening outside of the historic Snelling Fire Station where Naumann once worked to keep residents safe.

It all started when Fagundes was just 7 months old. The baby was having trouble breathing, and it got to a point when the poor little thing was nearly suffocating. Frantic family members made an emergency call for help from the outskirts of Snelling, but they soon realized an ambulance drive to Mercy Hospital in Merced would take too long.

Firefighters Kenneth Finch and Naumann were on duty that evening, but the family was informed that they needed to make haste to a nearby landmark in order to meet up. They did, and Naumann was able to revive the little Baby Fagundes and help him continue to breathe for the trip to the hospital.

Naumann, a volunteer at the time, would go on to become a firefighter for Merced County, eventually moving on to become a district chief in 1984, before retiring in 1989.

As for Fagundes, it took 65 years for him to finally get the urge to seek out Naumann, and formally meet the man who saved his life so many years ago.

Merced County Supervisor Lloyd Pareira was on hand for Monday’s award ceremony, and he was astounded by the story.

“All this time goes by, and then a couple of months ago, that young little fella wanted to meet George,” Pareira said. “There just happened to be an event going on here in town [at Bud’s Place], and on the way back, they stopped by the party, and George was able to meet this young man whose life he had saved all those years ago.”

However, to add other twist to the story, Fagundes revealed on Monday night that the occasion wasn’t exactly the first time he had met Naumann over the past 65 years.

There was that one other time, Fagundes said.

Another time when Naumann, like an angel, extended a helpful hand.

And then Fagundes shared the following story to the delight of those in attendance:

“In the late 1970s to the early ’80s, I was playing on a softball team in Merced. Me and a buddy were playing a softball game, and we went and got some beer, because we knew some girls that were our age that had their own apartment, and so we took the beer over to their apartment. …

“So when we left the apartment, we went out the back way down Arboleda, but this Sheriff’s car pulled us over. Out of the Sheriff’s car comes a sheriff and a fireman. They said they stopped us because there had been some firebugs in the area.”

The fireman was actually George Nauman, though Fagundes didn’t know anything about him at the time.

“And so while the Sheriff was lecturing us a little bit, George goes: ‘You know, young boys like this, playing softball, hanging out drinking beer, that sounds pretty American to me. Let’s let these kids go. I think they’ll be alright.’ … So I got two reasons to thank George!”

On Monday night, Nauman was honored with two plaques, with one destined to be displayed inside the Snelling Museum to commemorate the life-saving act carried out by both Nauman and Finch. One includes the original news article about the 1956 event as it appeared in the Merced Sun-Star. Another will include a recent picture of the two friends by a County Times photographer.