Restore Merced efforts growing along with its community impact 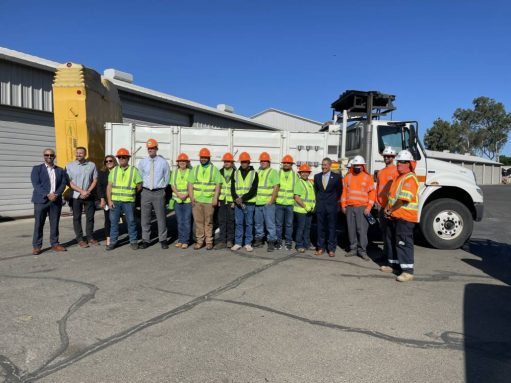 Restore Merced was recently awarded a contract with the ‘Back 2 Work Program’ run by the Butte County of Education through CalTrans that involves cleaning up along the sides of freeways and highways throughout Merced County. They kicked off their first cleanup on June 13, with a recognition at the Restored Workshop and some words from Merced Mayor Matt Serratto. 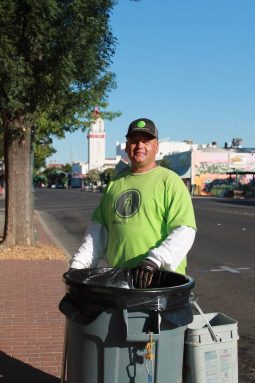 John-John Camacho is 11 months clean and ready to graduate from the ‘Restore Merced’ job program. ‘I was homeless for 22 years,’ he says. ‘I used to roam around downtown smoking cigarettes that I found on the floor. I have a thousand dollars saved up now. I had nothing when I came here. Coming from the ground up this is an accomplishment. I love coming to work, getting to beautify the highways feels good and has helped me regain the confidence I had lost. I try to bring people up because I used to bring them down.’ 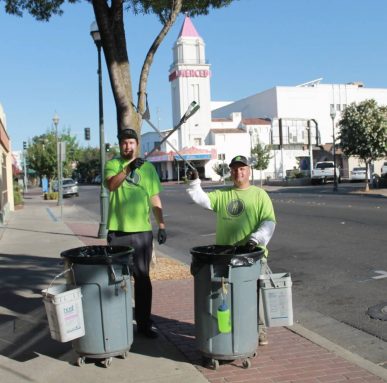 Jesse Flowers, on his first day of work, accompanies John-John as they clean the streets of downtown Merced of litter and garbage.

More than an opportunity to gain work experience, the local Restore Merced organization is leading underserved community members in Merced to live a purposeful life through a relationship of work, value, and mentorship.

“Restore Jobs” is a 9 to 12 month program through Restore Merced that provides training, employment and real world experience to those who are signed up through the program.  The local underserved community may look like residents who have been formerly incarcerated, are recovering from substance dependency, or are possibly even experiencing homelessness.

“Our program is available to anyone with barriers to employment,” said Matt St Pierre, the executive director and co-Founder of Restore Merced. “A lot of folks that we work with have possibly experienced those things but also it may include someone who has just had a difficult block in life — maybe grew up in the foster care system and maybe has dealt with a lot of adverse childhood experience and trauma.”

Restore Merced has recently been awarded two new contracts along with the already active contract the community organization has with the Public Works Department for the City of Merced that involves cleaning the streets in downtown Merced.

The non-profit was founded by Pierre and Caleb Medefind who were both raised in Merced County. Pierre spent some time working through non-profits in the Tenderloin district of San Francisco, working with residents who had been in recovery. Medefind, who was back in Merced, proposed the idea of mirroring the work Pierre was already doing, within the communities of their own neighborhood.

“We started talking about the potential of starting something,” Pierre explained. “I’ve had a relationship with the church right next to door to our building here, at the CPC (the Central Presbyterian Church), a downtown church in the middle of the city. But there hadn’t been a lot of significant ties and relationships between the neighborhood and the public that goes to the church, and so a lot of people were saying, ‘Well what does it look like for us to be a downtown church and what can we do uniquely for our neighbors.’”

Through the survey, Restore Merced received input on the lack of safe opportunities children had when they were not at school. A couple of retired educators were involved with the church and offered to assist with tutoring and mentorship opportunities. Through this successful survey of asking the community what they believed was needed, the After School and Summer Kids Program was born and still exists.

Along the same tune, several community members expressed concerns over the lack of good work opportunities.

“There have been a good amount of jobs available here locally but there was clearly a disconnect between some of our neighbors being able to access those jobs — and so that was a problem we tried to solve,” Pierre said. “We wanted to solve those problems with them and answer questions like, ‘How do you create some onramps to good meaningful work opportunities?’”

The result was an 8-week job readiness course that concluded with job placement for the graduates when they finished the program.

“We had a little bit of success with that, but a lot of folks we were working with had limited-to-no work history, large gaps in employment, had maybe been incarcerated for a long period of time, or dealt with substance dependence. We realized there was a need to be the first employer to give the first opportunity to some of these folks, and let them practice the things that are going to be important at any job but here with us first… Being dependable, having integrity, work ethic, and working well with others. But also getting some space out of work to remove other barriers, like getting their driver’s licenses and transportation sorted out as well as good permanent housing. Not only the things that might get you that good job you’re looking for, but also that will allow you to keep it. Our motto has become helping someone with a place of instability into a place of stability.”

The program also provides a network of support to individuals and seeks to build community, or as Pierre calls it the ‘secret sauce,’ within its work space.

“Of course, there is also the hands-on practical stuff, like the experience and pay, because people need income.”

The full work program first started as a series of neighborhood cleanups in 2018, four years ago. Since then, Restore Merced has grown into a new office space, workshop, and has recently gained two new contracts including the “Back 2 Work Program” run by the Butte County of Education through Caltrans that run two 40-hour week, eight-person work crews who are working with Caltrans doing litter adamant work along Merced County freeways and highways.

“That dramatically helped grow our program now to where our capacity is having 30 people at any one time employed with us through our Restore Jobs Program. It’s been so exciting.”

The Central Valley Community Foundation out of Fresno has also recently invested a significant amount to Restore Merced to allow the team a chance to be equipped to begin its work within its contracts. This included buying vans, trailers, and other bigger one-time expenses.

“Our community is so fortunate to have a change-making non-profit like Restore Merced,” said Cori Lucero, the regional director of Central Valley Community Foundation (CVCF). “Restore Merced creates multiple programs so that all Mercedians can be proud of the place we call home. The state chose the right partner to bring the Back 2 Work program to Merced County, and the Central Valley Opportunity Fund at CVCF is grateful to play a part in ensuring Restore Merced is set up for success.”

“There are a lot of healthy ways in which this is humbling,” Pierre said. “It’s what community is meant to be, this kind of almost knitting of people doing their part and that is how we are where we are now versus when we first started.”

Pierre also credits the growth of Restore Merced as a direct result of the partnerships the non-profit has with other community organizations in town.

“We work really closely with the Merced County Rescue Mission, a lot of our folks come in through there. We also started working with the Navigation Center and the D Street Shelter. Probation in the Trident Center are also sending applicants to us. Youth for Christ — we have also had tons of mentors come through to help. When everyone goes through our job readiness class they get paired with a mentor and we’ve had people like Mark Hendrickson, the county’s director of Economic Development, business owners, and others. There’s a lot of people who have contributed to this.”

He concluded that at the end of the day, what really matters is that residents are leaving with a strong network of support that they might not have had before.

“In every way we can, we want to grow that for folks when they are here and have them experience it from each other, from our staff. We talk a lot about this not just being a project — but a family — because really that’s what it takes. Family being what it’s meant to be. Healthy relationships that help keep us moving forward and growing together.

For more information on Restore Merced and its Restore Jobs program, or to make a donation to help support Restore Merced, please reach out to their website at www.restoremerced.org or give a call to (209) 233-1418.