Residents gather for Riley Walk, call for end to violence 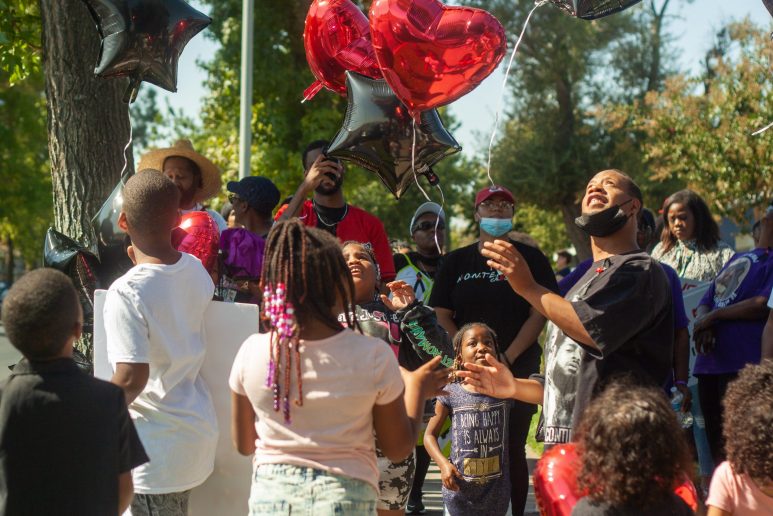 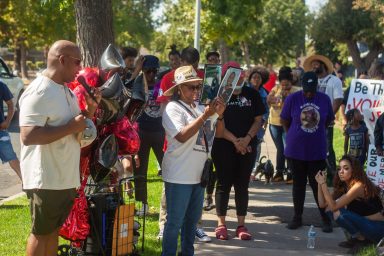 Marylene Riley, at center, holds photos of her sons Michael and Marlis’ as Pastor Allen Huddleston leads the group in prayer. 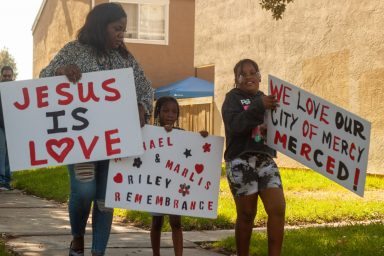 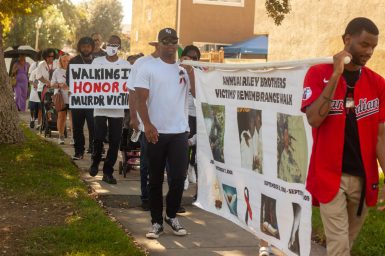 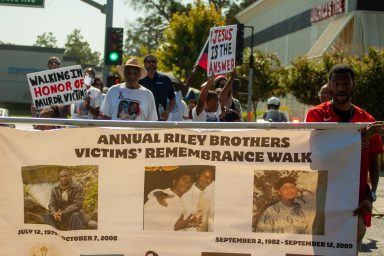 In addition to the large banner that was at the front of the group, other signs were held by those participating in the event that spoke to the larger purpose ofthe walk. 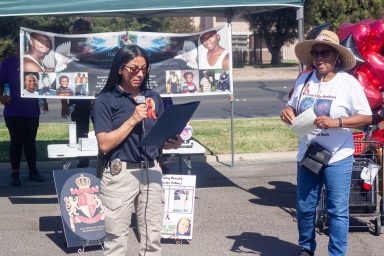 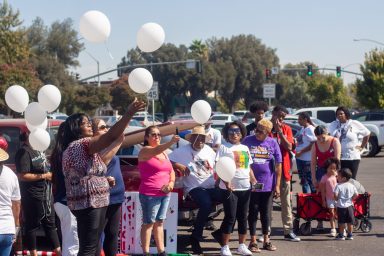 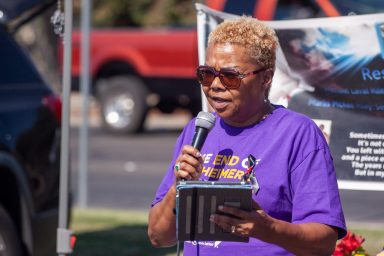 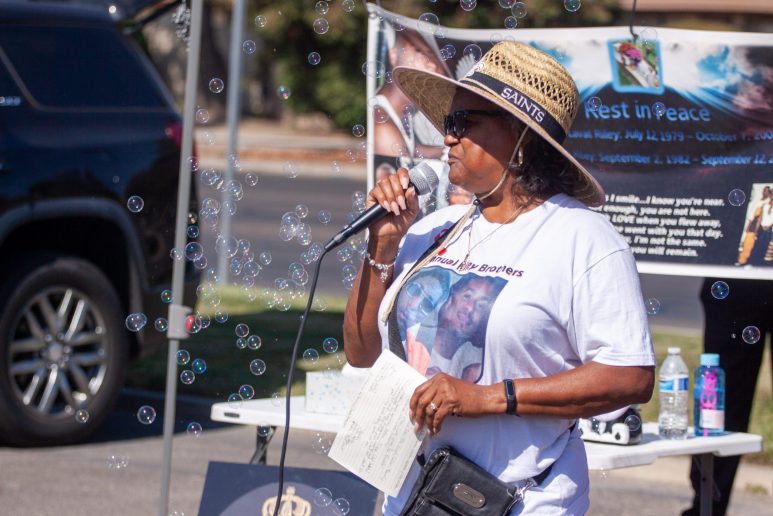 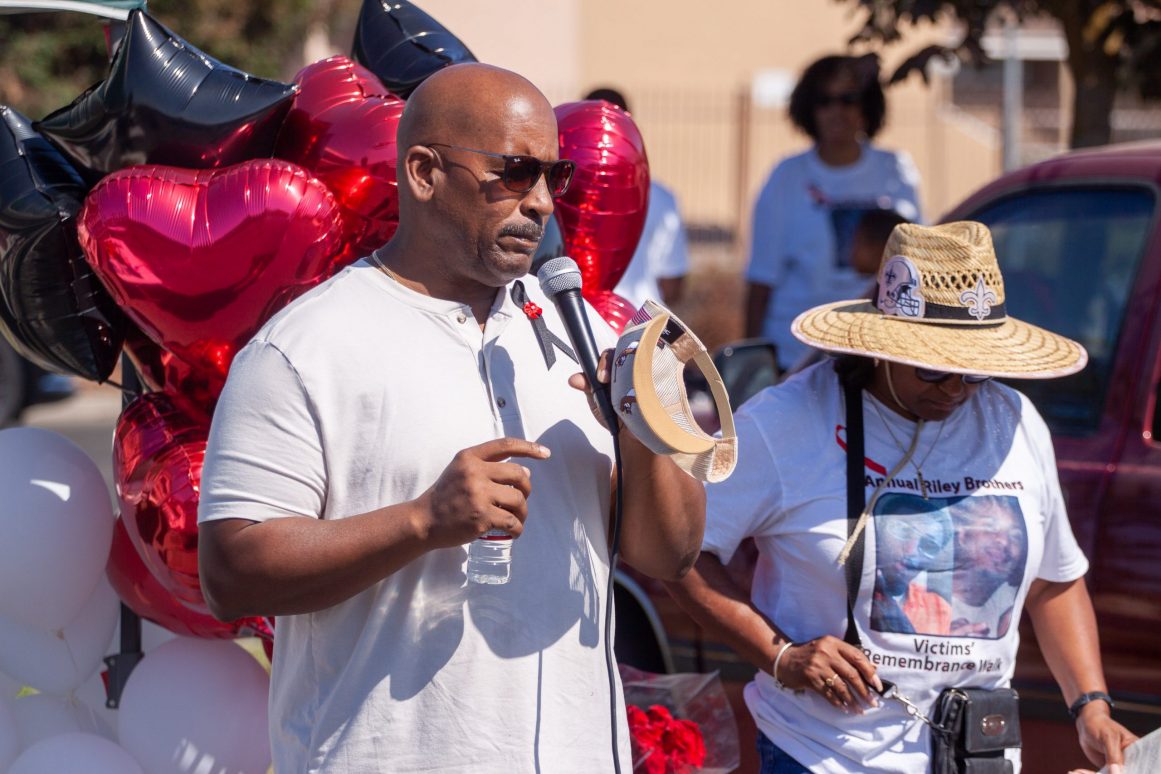 Dozens of families, neighbors, friends, police officers, and community leaders made their way to the FoodMaxx parking lot to celebrate the memories of those who had lost their lives too early to violence as part of the annual Riley Brothers Victims’ Remembrance Walk.

Held on the second Saturday of October each year, the event gathers Mercedians together to send a message of unity, calling for the end of senseless violence and remembering the lives of Michael and Marlis Riley who serve as the memorial walk’s namesake.

Now in its 14th year, the memorial is organized by Marylene Riley, Michael and Marlis’ mother. She thanked those in attendance for continuing to honor the lives of her son and their loved ones.

Riley also offered her sympathies to the Singh family as they held four nights of candlelight vigils across town following the murders of Aroohi Dheri, 8 months; her mother, Jasleen Kaur, 27; her father, Jasdeep Singh, 36; and the baby’s uncle, Amandeep Singh, 39.

In the Riley walk, people carried photos of loved ones as they made their way through the Loughborough neighborhood where the Riley brothers were slain.

Michael Riley, who served in the ranks of the U.S Navy in both Iraq and Afghanistan, was a 29-year-old honor student attending Merced College hoping to transfer to Harvard Law when his life was cut short. Nearly a year later, 27-year-old Marlis Riley would find himself down the street from the Village Meadows Apartment Complex, the site of his older brother’s death, facing two individuals with ill intentions. In the area of Conestoga Drive, Marlis Riley would find himself fighting for his life but ultimately overtaken. However justice would ultimately be served as his attackers would be caught in San Jose, convicted and sent to prison.

As residents made their way to the sites of both Michael and Marlis’ final moments, Marylene Riley shared memories of their personalities and life stories with those in attendance, describing them both as hard working, thoughtful and caring, and looking forward to both a better life and uplifting the community they called home. Riley would go on to thank their friends and those in the community for working with them through incredibly difficult years. Balloons were released and rose pedals scattered as those in attendance largely expressed the importance of bringing an end to unnecessary violence and restoring peace to the streets of Merced.