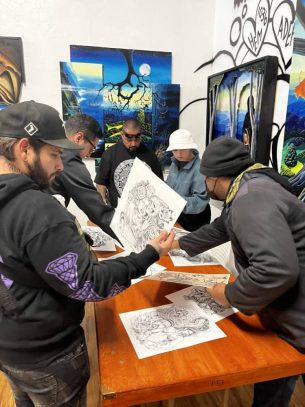 Chuco encouraged his guests to grab a hard copy of one of his many prints prior to beginning his talk. 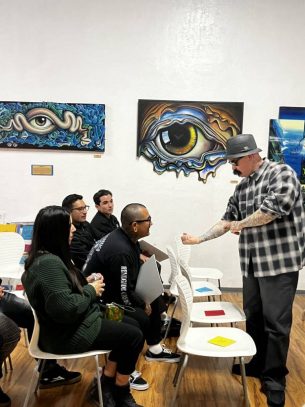 Angel de la Rosa shares a special moment with Chuco as they bond over one of the featured artists tattoos. 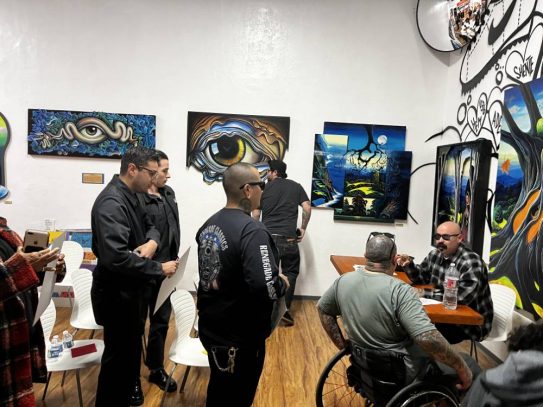 After his talk, fans were treated with a quick meet and greet with the artist where he signed prints, shared stories, and took pictures.

Chuco Moreno, a renowned Chicano artist and tattoo specialist, led an artist talk with an audience of fans recently as part of a series of art exhibitions, classes, and talks at the art studio of Kreepy Kawaii in downtown Merced.

At the evening event, the small studio quickly became packed with residents eager to learn more about the artist.

Chuco welcomed his audience and even offered guest a chance to grab one of the many prints he had spread across the table he lead his talk from.

“Tattooing raised me up,” he began. “It made me who I really am.”

The artist talked about his upbringing, the obstacles he overcame in his teenage years — including homelessness and gang affiliations — and emphasized the drastic changes art and tattooing have made on his life.

Chuco was born in the 1970s, and grew up in Northern California.

“Because of the homeboys and the life I was in — I was like, no that’s not me. I don’t do that,” he shared as described the time an art teacher submitted a piece of his artwork into a competition (without his knowledge) and he won a scholarship to the Art Academy in San Francisco.

“I turned it down,” he continued. “I never went. Later on in life when I was working digging a ditch, I would think, damn, maybe I could have done something if I had taken the opportunity.”

Thankfully, Chuco recalls, art would come back to find him in the form of tattooing.

“In many ways tattooing has saved me as a person, and also given me such a crazy life. I could never have foreseen this type of stuff.”

Paying homage to his ancestors, Chuco creates intricate black and white fine line tattoos portraying “La Raza” and cultural stories. The black and grey imagery goes back decades. Girls, roses, guns, low riders, and religion are just a couple elements related to the style. Through the advancements in the world of tattooing over the past few decades, Chuco has managed to keep the traditions of Chicano tattooing going by sticking to his roots.

“I’ve been very conscious of not changing too much,” he said. “If you look at the stuff that I do and the world today, specifically with realism tattooing, it’s unreal. It’s unbelievable what these guys are capable of doing. I think its beautiful, but I’ve never been interested in that. Early on, I realized if I stopped tattooing the way that I am … If I don’t keep this alive, in the future it will not exist anymore.”

He went on to compare the process of tattooing the Chicano style of artwork on others as a generational gift.

Chuco’s skilled work has earned him respect from within the tattoo community and many regard him as one of the most top-rated Chicano tattoo artists out there. It is definitely something that didn’t happen overnight.

“You have to be uncomfortable in order to get that gain. It’s a give and take.”

Creating, sharing, and tattooing his artwork is a personal matter to Chuco. He feels passionate about his community and wants to share the imagery with those who follow and respect the roots of his raza.

Chuco has several artist books, merchandise, and a children’s book co-authored by his wife, Amber Moreno. He has acted in a movie, commercials, and has been featured in Tattoo Life magazine. He is currently working on a movie and spreading the message of art and community out to anyone who cares to hear his life story and the endless possibilities that can come out of following your intuition and doing what you love.

“I, for sometime now have felt a personal obligation to young people who are wanting to do well in their lives — whether it be in their pursuit of artistic expression as a career choice or just in finding a sense of well being and stability as a human. Especially with Chicanos and those that come from my community, but also people in general. I would say, regardless of age or ethnicity. I have lived a colorful life with many obstacles along the way. I see clearly the way things are and believe in making a difference not only for myself but for anyone out there that is seeking a better way of life. When I began my path there was little in the way of support for people like myself looking for something or someone to reference as a model or map in navigating through life’s many challenges. I have in one fashion or another, always felt an internal drive to push the boundaries of the social, economic, and cultural limitations that exist in today’s world. Nowadays, I find myself in a position to do just that through the magic of art and tattooing for which I’m truly grateful. I’m happy to share my experiences in not only the business and professional side of my life but also the things in my personal life that I have learned along the way, making my life better in some way. It’s important to me that I share these experiences with others because I can still remember what it felt like to be at the bottom with no clear direction or hope for how to find my place in this world. For me, the opportunity to show others coming from similar beginnings ‘it can be done,’ regardless of what we may perceive as impossible, makes all the effort and sacrifices very worthwhile.”

You can find Chuco Moreno on Instagram @chucomoreno95237 and on his website chucomoreno95237.com. Kreepy Kawaii is located in Downtown Merced at 1742 Canal Street and can be reached at (209) 354-6067 for more information on art shows, talks, and classes.