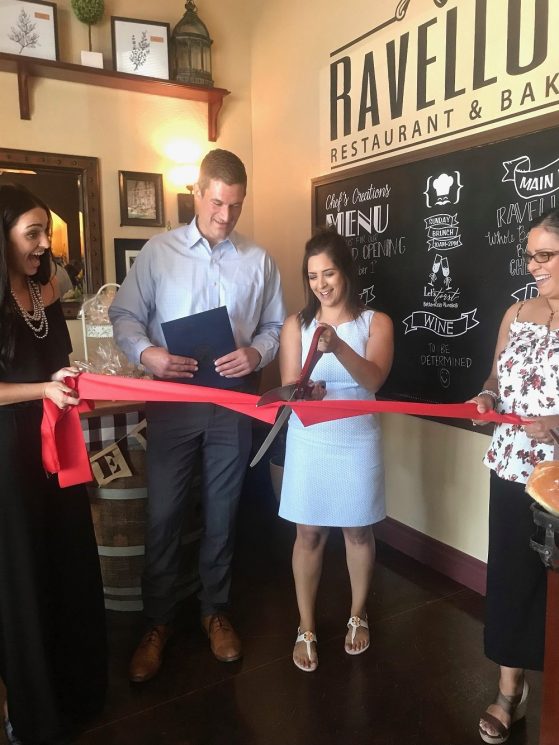 Devin DeLeon, the owner of the new Ravello’s Restaurant in Merced, cuts a ceremonial red ribbon to mark the official grand opening as City Councilman Matthew Serratto and others look on.

Devin DeLeon, a Merced native, worked as the restaurant manager before taking over its ownership.

The new owner, 27-year-old Devin DeLeon who was born and raised in Merced, told the Times, “I worked here for seven years. I was the previous manager. The owners retired, and the landlords wanted to lease it to me. I am the only owner. We’re using all family recipes.”

Ravello’s is named after a village on the Amalfi Coast in Italy where DeLeon’s ancestors are from.

Before the ribbon-cutting ceremony, Gary Arzamendi, Merced City Teachers Association Union President and a Sixth Grade Teacher at Stefani Elementary School, who identified himself as a “top customer” and a Christian man, said a prayer for the community to come together and support Ravello’s.

Pastor Robert Morris of Valley Harvest Church blessed the business and prayed for it to prosper.

Devin DeLeon cut the ribbon and those beside her holding it were Katie Bos, the restaurant’s Event Planner, Merced City Councilman Matthew Serratto, and Michelle DeLeon, the owner’s mother.

DeLeon announced, “This means a lot to me. I couldn’t have done it with out Katie and the whole staff, cooking the new recipes. Welcome to Ravello’s.”

During an interview with the Times, Chris Farmer, a food server, said, “We have the same wait staff and same cooks as when it was DiCicco’s.  There are a couple of new hosts, but they were in the process of being hired already.”

The restaurant is available for events and banquets such as baby showers, wedding receptions, holiday parties and birthday parties.

On Sept. 26, Ravello’s will host a fundraiser for the Leukemia and Lymphoma Society with wine tastings, raffle prizes and live music featuring Michael Todd.