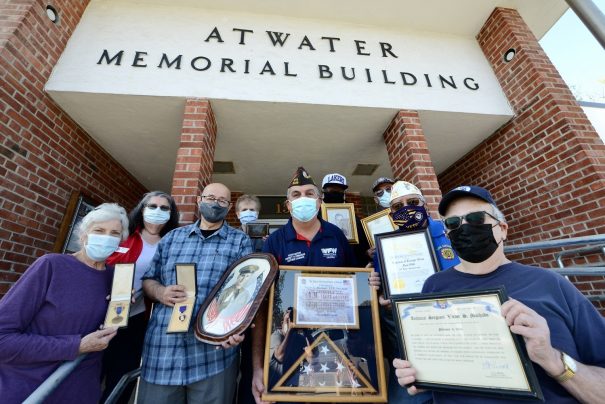 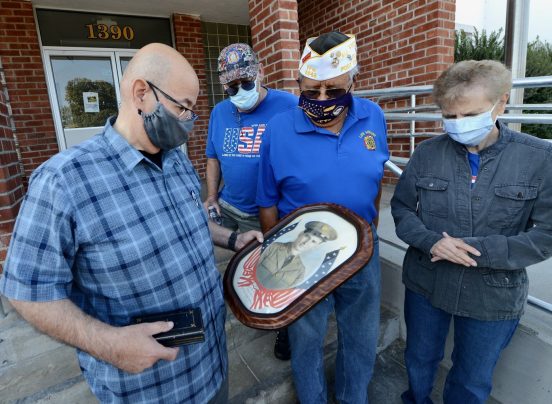 Philip Bettencourt looks at a portrait of his relative Victor Machado — the first serviceman from Merced County to perish in World War II.

Philip Bettencourt held a Purple Heart medal in one hand, and a portrait of his great-great uncle in the other.

“I’m glad this part of my family history has been saved and protected,” Bettencourt said. “I served in the military, and it’s an honor to learn about someone else in my family who served and died for this country.”

Past leaders of VFW Post 9946 in Atwater presented Bettencourt with medals, certificates, flags and awards during a get-together outside the city’s Veterans Memorial Building. The VFW post was named after Bettencourt’s relative — Victor S. Machado — when it was formed 71 years ago.

However, it was a bittersweet moment because the charter of the VFW Post was revoked recently, and the Memorial Building remains closed. There’s ongoing debate and discussion over how and when another veterans organization will take over operations at the popular downtown site on Broadway Avenue.

Meanwhile, post members managed to secure the Machado memorabilia for his remaining family members in the area. Bettencourt was excited to receive the material which included the Purple Heart — a military decoration awarded in the name of the president to those wounded or killed while serving, on or after April 5, 1917.

Machado of Atwater was killed on Feb. 4, 1943. He is considered as the first serviceman from Merced County to lose his life in World War II.

Bettencourt — who served in the Navy during the Cold War — said he only wished his mother, Janice Machado Bettencourt of Atwater, would have lived to be a part of the small ceremony to return the belongings. She died on Oct. 10.

Philip Bettencourt said the remaining family will decide on what to do with the late serviceman’s items which have historic value. They are considering a donation to a local museum, perhaps the Merced County Courthouse Museum.

Said Bettencourt, “We’re just glad they didn’t end up in a box somewhere. … And we want to thank VFW Post 9946 for keeping his memory alive for so many years.”