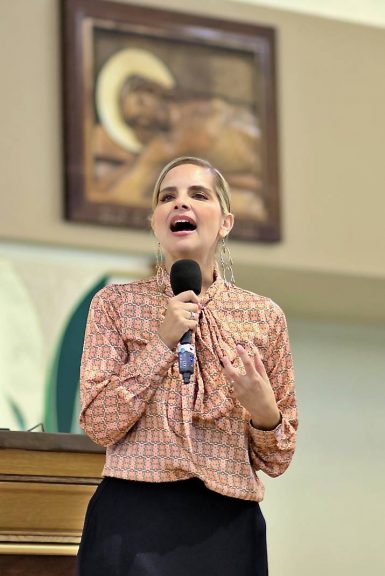 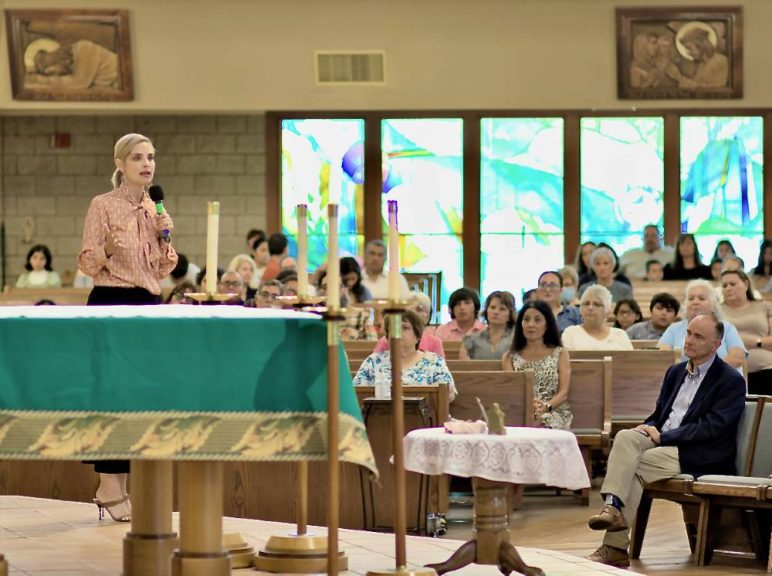 Hundreds of local faithful turned out to hear a notable pro-life (or anti-abortion) advocate at St. Patrick’s Catholic Church over the weekend.

Sandoval, who has spoken to audiences around the world, is particularly popular in Latin America. Spanish-language YouTube videos featuring her testimony and advocacy for chastity have racked up millions of views. She was introduced by Bishop Joseph Brennan of the Fresno Diocese.

Patricia Sandoval retold the story that has captivated pro-life supporters around the world. She was 19 years old when she became pregnant for the first time with her then-boyfriend. He wanted to keep the baby, but Sandoval didn’t. So she got an abortion. Afterward, she said, she felt depressed and started to have anxiety. Nightmares followed. She said that despite practicing the safe sex techniques she was taught in school – using condoms and birth control – she soon had two more pregnancies, which also ended in abortions.

All three abortions happened within the span of a year and a half, according to her.

“I believe when a woman has an abortion, her heart dies,” she said. “It was the worst feeling of my life. It is the biggest feeling of shame walking into an abortion clinic.”

Despite hating the abortions she had, she ended up leaving her boyfriend, moved to Sacramento and started working in a Planned Parenthood clinic. She said what she saw in the clinic traumatized her and led her on a path toward homelessness and drug addiction.

It was a chance encounter with a Christian that led her to turn her life around. She started sharing her story and was later given a platform on Eternal Word Television Network, a global Catholic television group. Her work with EWTN led to speaking engagements around the world and recently a book about her life story, titled Transfigured. The event at St. Joseph’s also doubled as a book signing.

Sandoval railed against what she termed the “abortion industry,” and said she thought of herself as a victim caught up in “a trap.” She refuses to call doctors who perform abortions doctors, instead referring to them as “abortionists.” She also compares the work done at Planned Parenthood clinics to a “Holocaust.”

Her overarching message, however, was one about family. She brought up the status of men in the abortion debate, claiming that men have been left out of the conversation even though they have a stake in the outcome of an abortion.

“We always relate abortion to women. I can tell you with confidence there are more men today that are scared to be fathers than women scared to be mothers,” she said. “Men don’t have a voice. They have no say as fathers. And it’s very bad because abortion takes the right away from the whole family.”