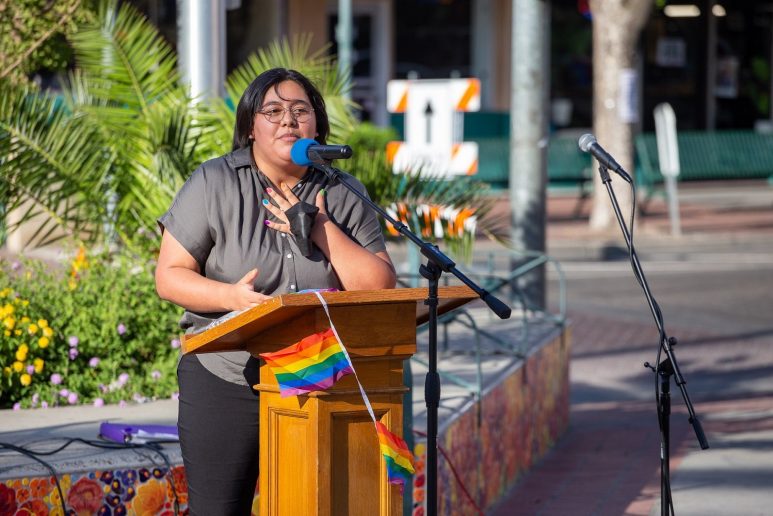 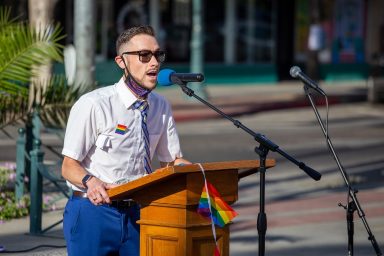 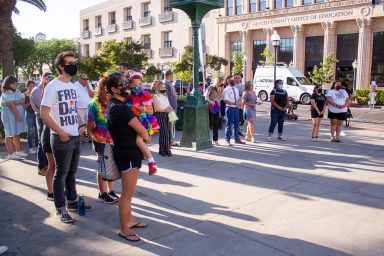 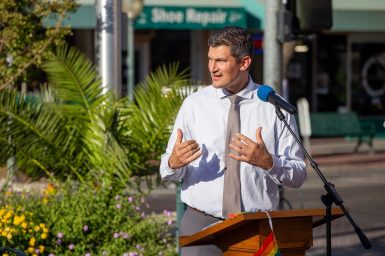 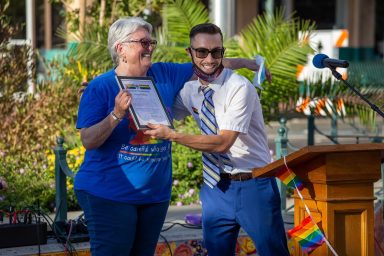 Adam Lane presents Nancy Redding with a certificate acknowledging her contributions to the LGBTQ community. 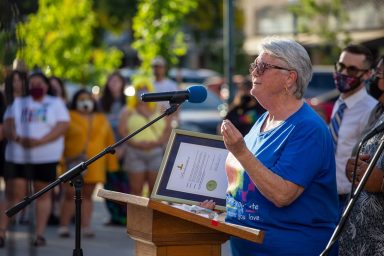 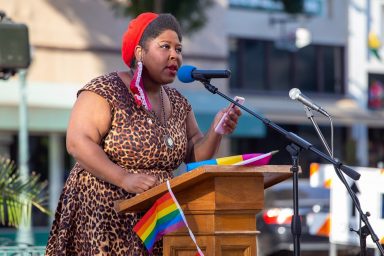 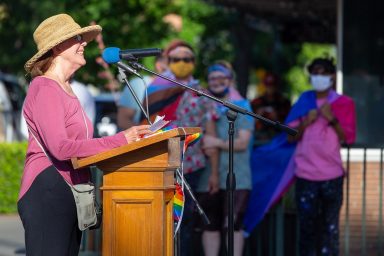 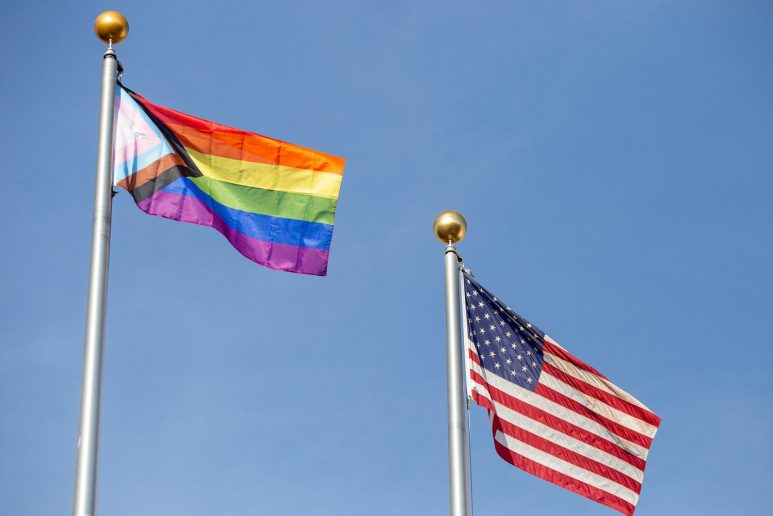 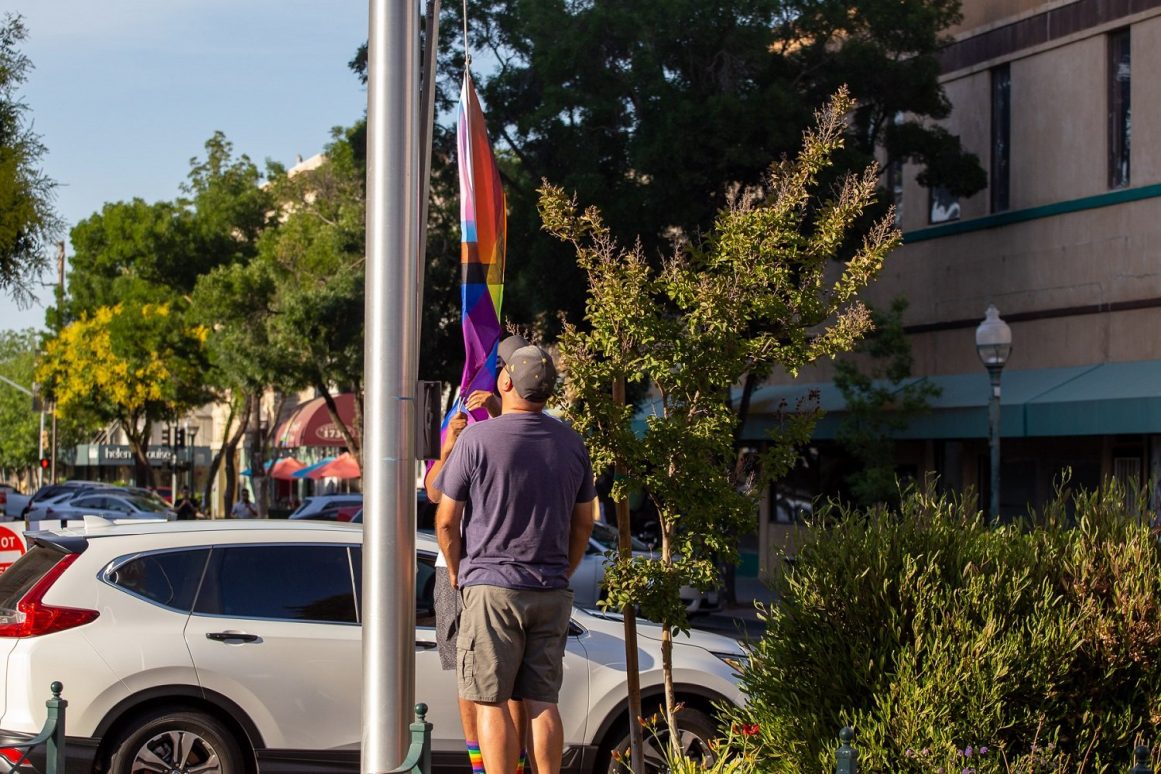 The Pride Progress flag makes its way up the flag pole during Tuesday’s event.

Residents from across the local area came together at Bob Hart Square on Tuesday evening for a special ceremony that highlighted the start of Pride Month. Backed by a unanimous vote to support flying the flag by the Merced City Council, organizers were able to raise the Progress Pride flag up the flag poles located in downtown Merced.

The Progress Flag still features the traditional LGBTQIA+ rainbow colors but is accompanied by a forward-facing arrow made of transgender Pride colors of blue, pink and white as well as black and brown stripes to represent people of color. The intent behind the flag is to fully encompass a wider range of people and show support for marginalized members of the LGBTQIA+ community.

Those who made their way to the ceremony took in a variety of emotional stories from members of the community and speakers who shared what the moment meant to them, as well as the importance of being able to raise the flag in Merced.
First to the podium was event organizer Gabriela Spiva, who welcomed residents to the event. “This is such an amazing feat that so many have fought for and that for some seemed completely unobtainable until now. For many of the elders that have lived in Merced for many more decades than I’ve been alive this is something that seemed like a shot in the dark,” Spiva said before turning the Podium over to co-chair Adam Lane.

“To some of us this feels like nothing short of a miracle,” Lane said of the decision to fly the Pride Progress flag throughout the month of June. “ But at the same time this has been a long time coming.”

Lane went on to say that it is his hope that Merced will become a safe space for all of the LGBTQIA+ people who call the city home. He also noted that with Bob Hart Square being considered the heart of downtown Merced that he saw it as the ideal location to have the flag displayed. “I want to turn what has been a source of shame and secrecy into pride and honesty.”

Merced Mayor Matthew Serratto also took to the podium to speak to those in attendance and share his support for the special occasion.

Following the slate of scheduled speakers and the raising of the flag, community members were invited up to the front to share any thoughts they had on the meaning of the day’s events. Numerous speakers shared the importance of accepting others and creating an inclusive environment, the significance of the day’s event, and acknowledged that there is still additional work that can be done to create an environment that is more accepting of everyone’s unique characteristics.

Merced County Board of Supervisors to Consider Replacement for Retiring CEO

Spread love and joy — not Covid — during the holiday season

Children ages 5-11 can get the vaccine