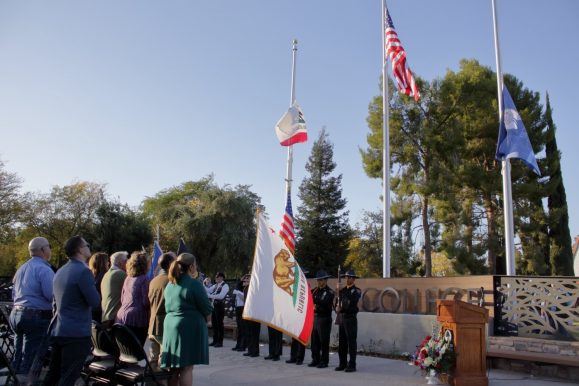 The national, state and campus flags are hoisted above the new entryway to Merced College. 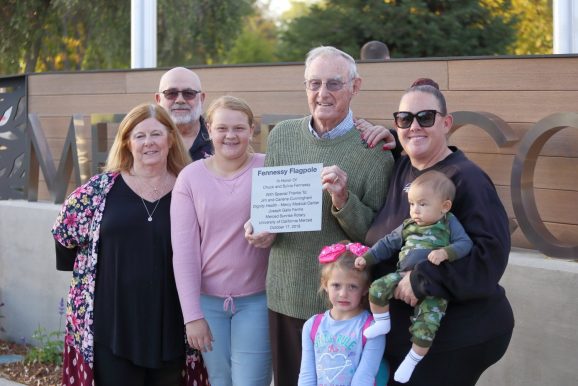 Chuck Fennessy, at center, with his family.

A new trio of flagpoles adorn a centerpiece Merced College sign at the main entrance to the campus on Yosemite Avenue between G Street and M Street. The entryway is surrounded by new seating, walkways, and colorful landscaping. The new flagpole feature was named in honor of Chuck and Sylvia Fennessy.

Chuck Fennessy spoke at the event and highlighted the importance of Old Glory and its symbolism for America. He noted that he was born and raised overseas in Ireland, but later emigrated to this country and served in the Air Force during the Korean War. He pointed out that while he is definitively a “full blooded Irishman,” he “thanks America for giving [him] the chance to be here in America.”

Fennessy went on to honor his wife for her pivotal role in bringing the “Fennessy Flagpole” to fruition for the campus. Special thanks was also given to the Merced College Foundation, Jim and Carlene Cunningham, Dignity Health Mercy Medical Center, Joseph Gallo Farms, Merced Sunrise Rotary and UC Merced.

Then the U.S. flag was hoisted high into the sky, alongside the State of California flag and Merced College’s own Blue Devils flag. The flag-raising ceremony was organized by the American Legion Riders Chapter 83 of Merced’s American Legion Post 83. Music professor Alex Simon led the the presentation of the National Anthem.