Premium cigar shop owner: Leave us out of crackdowns 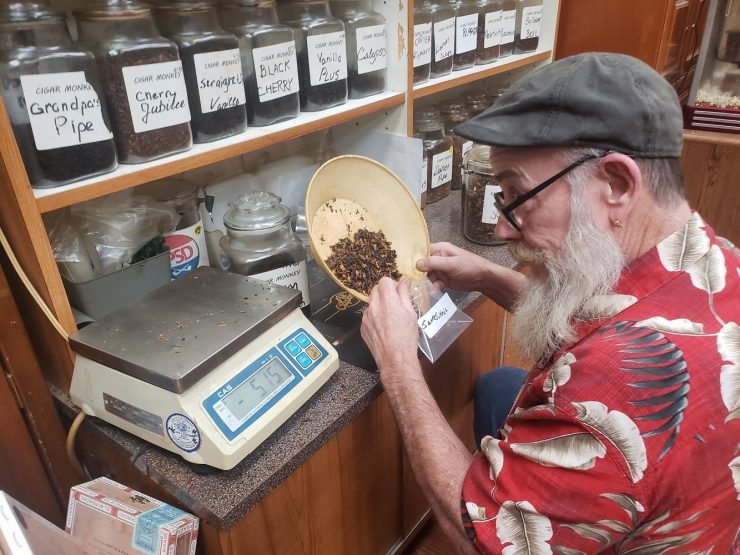 Mike Siegel fills an order for a pipe tobacco blend at his Cigar Monkey store in downtown Merced. 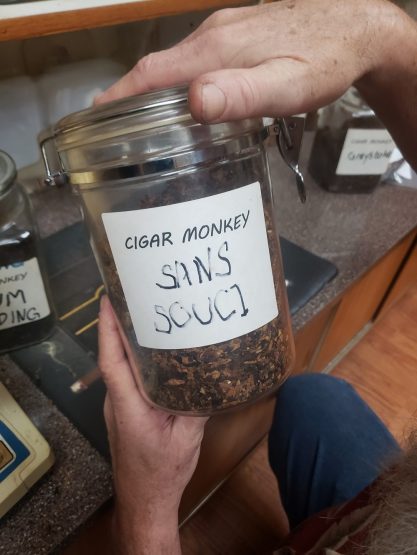 A blend of pipe tobacco on sale for adult connoisseurs at Cigar Monkey.

As the Food and Drug Administration, state lawmakers and city leaders consider new rounds of regulations and outright bans on flavored tobacco and vaping products, the premium cigar industry is pushing back and expressing resentment.

“We’re being attacked, if you look at it from my end, at a more local level,” says Mike Siegel, the owner of Cigar Monkey in downtown Merced.

He says two main issues really have nothing to do with his fine cigar business: 1) Kids having access to mass-produced, cheaply-made and relatively inexpensive flavored tobacco products, and 2) The idea of vaping liquids with battery-operated devices being considered “tobacco smoking.”

“When people are vaping, for example, we see it presented as a cleaner form of smoking, but it’s not smoking at all,” Siegel points out. “When you vape, you are essentially dosing yourself with nicotine extract. And it’s a nicotine extract that comes from vegetables that have a higher natural nicotine content than tobacco. Then they add glycerol, and then flavoring. And now we see people — moderate to heavy vape users — with respiratory problems and actually developing issues with fat build-up inside of their lungs. … Gee, I wonder how that fat got into their lungs?”

Siegel adds, “Premium tobacco smoking is not about the nicotine. It’s about flavor, time and relaxation.”

Nevertheless, Siegel has watched as regions in California adopt comprehensive bans on flavored tobacco products — not just the the fruit and candy-flavored e-liquids that helped make vaping popular among teens but also flavored cigarillos, cigarettes and cigars. Since 2018, nearly 40 cities and counties have implemented bans on flavored tobacco products, including comprehensive bans in San Francisco, Oakland, Beverly Hills, Sacramento, and Marin County. Now Los Angeles County is considering a ban. Livermore has a ban though it excludes premium cigars.

The shop owner said he looked into vape products when they first hit the local scene, but decided not to invest in them because the flavor they produce does not come close to the flavor of fine tobacco.

“The best they can hope for is to try and make it taste like a brown paper bag,” he says.

Likewise, Siegel says, mass-marketed, cheap cigars feature smokeable wrappers that are not made of whole tobacco leaf — but a product called HTL, or homogenized tobacco leaf.

“If you were to cut that open and peal it off the cigar, the inside looks like a piece of white paper. Essentially what they are doing is they are grinding tobacco and making a paper out of it. Then they print a tobacco leaf pattern on the outside. It’s typically the kind of thing you see at gas stations or convenience stores.”

“Our industry is trying to make a distinction. You don’t go to the playground, and see the kids passing around a $12 Rocky Patel cigar. What you see them passing around are the 3-for-a-buck, mass-market cigars. And that’s assuming they are leaving it as is. A lot of them are buying those cigars simply to use the flavored wrapper leaf to re-roll marijuana in. But none of this applies to my premium products. …

“There is a world of difference between mass market cigars and premium cigars. Mine is an industry that is still done almost entirely by hand everything from the seed to the finished product on the shelf. Anywhere from 300 to 500 pair of hands will be involved in the process of making a cigar.”

Siegel points out that people who enjoy premium cigars and fine tobacco pipes as they are meant to be smoked — not inhaling, just relaxing and enjoying the flavor — can live happy, healthy and even longer lives.

“Premium cigars and pipe tobacco — when consumed the way it was intended to be consumed — is actually a healthy lifestyle choice,” Siegel contends. “It has a lot to do with meditation, relaxing and stress relief.”

The problem is some high-end cigars and endless varieties of pipe tobacco are indeed infused or sweetened with distinct flavors. Siegel says the worst-case scenario for Cigar Monkey and other stores like it, is a state and nationwide ban to do away with ALL flavored tobacco products.

“How do you tell your 80-year-uncle that the Cherry Cavendish blend he has been smoking in is gentleman’s pipe for 55 years is now illegal?” he asks.

Here’s what the Chancellor of UC Merced is saying

Merced County coronavirus cases up to 7