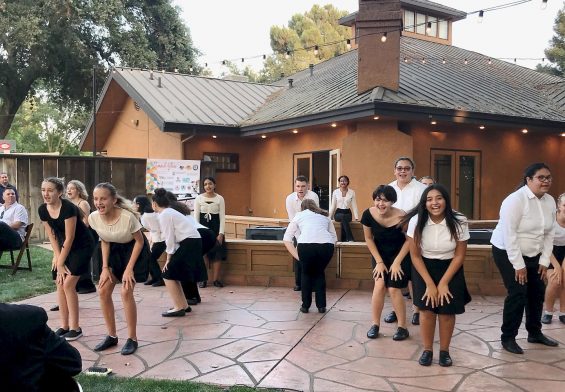 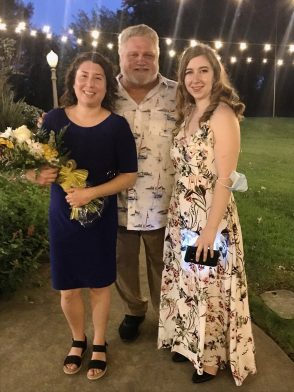 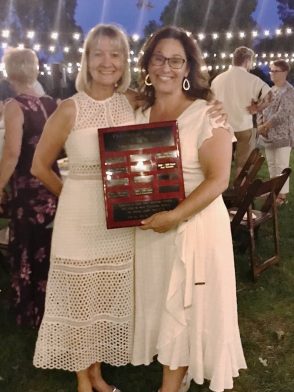 Emily Langdon, president of the Playhouse Merced Board, is seen here with Jenni Samuelson, who received awards as Very Important Patron and Volunteer of the Year.

It was wonderful to see the return of the annual Playhouse Merced Gala on the evening of Aug.13 — this time at a new venue, Vista Ranch, located at 7326 E. Highway 140 in Merced.

The event was a prelude to its 2021-22 season, which features productions of Godspell, The Brothers Paranormal, White Christmas, The Mountaintop, Miss You Like Hell, The Spongebob Musical and One Hit Wonder.

To be on the safe side during the COVID era, only 200 guests were in attendance.

Cocktail hour began with wine, beer and appetizers as guests chatted amiably outdoors at the picturesque Vista venue. They relaxed under the shade of the oak trees or at their tables, with the beautiful vineyards as a backdrop.

Emily Langdon, the president of the Playhouse Board, welcomed the guests and praised the Gala co-chairs, Carol Longobardi, who is Playhouse treasurer, and Tracy Proietti, corresponding secretary. Current and former Board members were recognized, as well as Tina Socogio, fundraising chair.

The Playhouse was able to keep virtual classes available during the pandemic for the youth in the Conservatory to take, which was truly a great way to keep kids in contact with one another in a supportive, creative environment, and then summer theater camp was offered.

Langdon exclaimed, “We did our job during COVID — we held it down, and now we’re happy to be reopening!”

The evening’s entertainment consisted of youth-created performances! It was provided by the adorable and talented teens who just completed the Playhouse Merced Summer Theater Program, taught by Angelina Thompson.

Thompson was the director for the evening entertainment, and Gabbi Stokes was the Assistant Director.

Langdon told the Times, “We had three camps this summer — two back-to-back camps for the 6 to 12-years-olds and one three-week camp for the teens, ages 13 through17. The teens’ assignment was to develop a Gala show with the theme, ‘The Story Is Us,’ which is also the theme for the 2021-22 season.

“The teens were told that the Playhouse was going to ask its patrons for support for the Conservatory, and we needed them to use the Gala show to express what theater means to them.

“Lauren Miller, a former Conservatory member who grew up performing at the Playhouse, taught a monologue writing class during the teen summer camp, and as a group, the teens decided what parts of the monologues made it into the show, so the guests at the Gala could listen to some of their inspiring comments, one of which was that Playhouse Merced is a place where kids feel ‘safe, loved and accepted’.

“The teens were also asked to select upcoming shows and highlight them by picking songs to sing at the Gala that will be part of the upcoming season.”

For example, the teen show opened with “Day by Day”, a song from the musical “Godspell”, which will be performed by Playhouse Merced as part of its upcoming season.

Braxton received an award in appreciation for leading the Playhouse through the pandemic.

Angelina Thompson received praise and was presented with flowers for her outstanding efforts directing the youth summer camp, as well as directing the teen show at the Gala.

The Very Important Patron Award went to Jenni Samuelson, who was named Volunteer of the Year 2021. She is a native of Merced with a musical theater background, and is an award-winning opera singer.

Langdon told the Times, “At the Gala, Jenni was presented with the Playhouse Merced perpetual plaque for her volunteer efforts. The plaque will go back to the theater now, where it hangs.

“Because of Jenni’s community relationships and contacts, the 2019 Gala at the Merced County Courthouse was a huge success. She consistently helps the Playhouse, and is able to bring in sponsors and call on friends to put together quick shows. In the past, Jenni was President of our Board and then Fundraising Chair.”

A central theme of the evening was enabling more local youth to have theater in their lives, hence “the ask” was important.

Thirty per cent of the campers in the Summer Theater Program received financial support from the David Zacharias Fund. Many kids who had never been to Playhouse Merced before came to camp.

The fund was spent down, so guests at the event were asked to help replenish it so more children can participate in theater.

As the Gala wound down, it was announced that the 2021-22 season will kick off with the play “Godspell,” which will run from Sept. 17 through Oct. 3. Tickets can be purchased through the Playhouse Merced website or by contacting the box office at 725-8587.