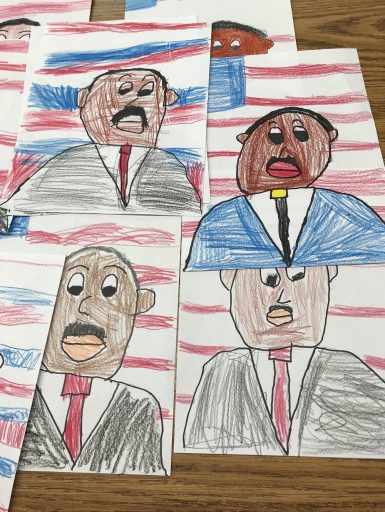 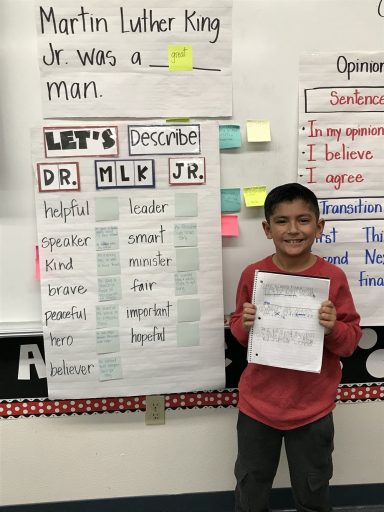 Cash Caudillo, a second grader in Caren Ross’ class at Peggy Heller School, learned a lot about Dr. Martin Luther King, Jr. from reading a biography about him. 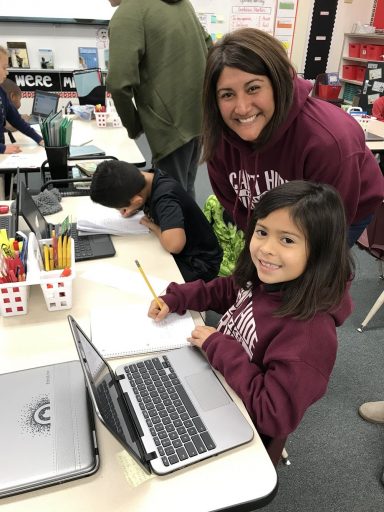 The observance of Martin Luther King, Jr.’s birthday on Feb. 20 is coming up fast.

Caren Ross, who teaches second grade at Peggy Heller School in Atwater, made Martin Luther King, Jr. the subject of a two-week unit in January.

The children embraced the lessons enthusiastically. They promptly got busy learning more about the leader, as well as what he was like as a person.

Ross told the Times, “Before starting the unit, the students just thought of the occasion as a day off from school for someone’s birthday.

“I wanted them to know that because of certain people in the past, we have a diverse classroom.  I think they’ve taken this message with them to the playground.  They’re better friends, better people.”

The unit she designed tied in reading, writing, grammar, spelling words, and an art project.

She focused on biography as the genre.

Ross explained, “We have a program on the chromebooks called Epic, and I assigned a biography to all my students.”

In an easy-to-read and straightforward style, it covers King’s childhood, hobbies, marriage, family, protests and speeches, and describes the issues he faced in his day and how he overcame them, and it allows readers to get to know him.

The second graders’ newfound knowledge was evident when they immersed themselves in opinion writing.

Ross told the Times, “We described him with words, and the students had to find back-up evidence.  My word was ‘great’.”

Each student thought of their own word to describe King, and they inserted it in the sentence, “In my opinion, Martin Luther King, Jr. was a _____ man.”

Then they had to present three reasons why they felt that way.

Some of the words students used to describe King were “brave,” “believer,” “thoughtful” and “kind.”

Haven Garcia used the word “awesome” to describe King, and for back-up evidence, wrote, “He fought for equality when no one else would.”

Another student described King as a “speaker” and wrote, “He fought with words.”

To help the students write their paragraphs about King, Ross posted sentence starters and transition words on the classroom whiteboard.

During the week of January 13 through 17, the students will complete their writing and take comprehension and vocabulary tests.

So far, Ross is very pleased with the students’ response to the unit.

She told the Times, proudly, “They’ve worked hard. They have exceeded my expectations.”