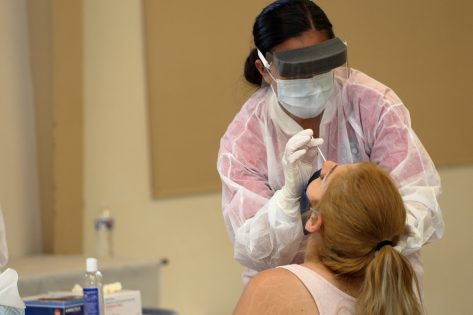 A woman is tested for the COVID-19 virus at a Public Health center set up at the Merced County Fairgrounds. Hundreds of residents continue to be tested every day at multiple locations located throughout the county.

A large crowd of Mercedians join together and raise their fists in Courthouse Park following the death of George Floyd while in police custody in Minneapolis. 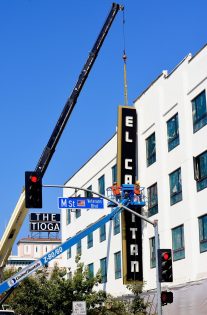 Construction workers raise up the sign for the newly remodeled El Capitan Hotel on Main Street in Merced. The new sign for the refurbished Tioga apartments can also be seen in the background. 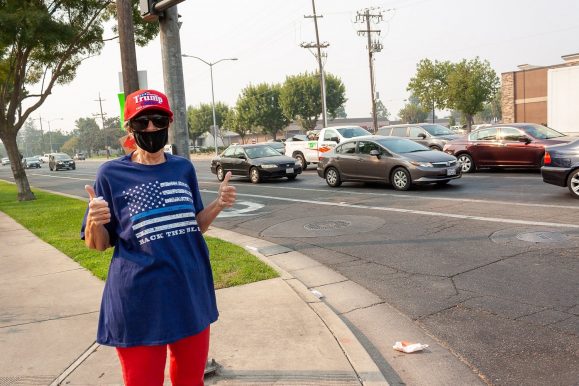 A supporter of President Trump gives a thumbs up during a campaign car parade in Merced. 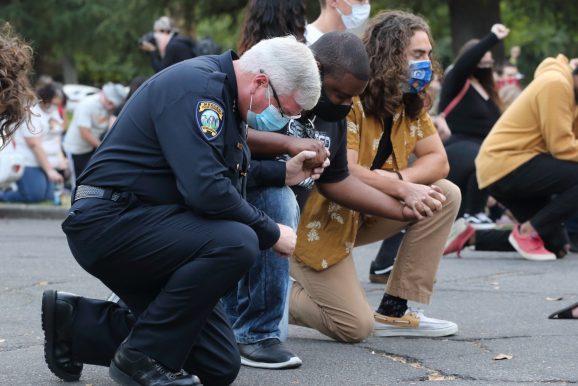 Merced Police Chief Tom Cavallero takes a knee with residents who showed up in Courthouse Park to support the Black Lives Matter movement.

It was the year many of us would like to put in the rear view mirror.

But even on New Year’s Eve — with all the hope and prayers for better days ahead — the events, actions and circumstances of 2020 are by no means fading away.

The threat of the worldwide pandemic has not diminished despite news that vaccines are on the way. The holidays have brought on a surge in local COVID-19 cases and deaths as the virus continues to spread through Merced County.

The status of our education system — from elementary schools to the university level — remains tentatively in hybrid learning and the reality of an unpredictable, immediate future.

The fallout of last summer’s violent social unrest across the nation continues to simmer, and the controversies and consequences of a historic election year remain in the public eye.

With this in mind, the Times presents our most memorable pictures of 2020.

You know, they say every picture tells a story.

Well, we say the story in each of these pictures … isn’t over yet. 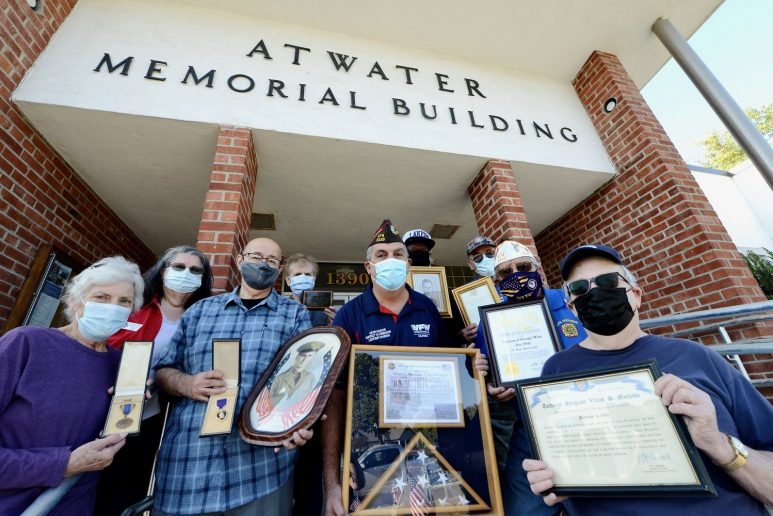 ATWATER VFW HALL CLOSURE — Members of the Atwater VFW pose with memorabilia of the club’s namesake soldier. The landmark hall in town has been closed after the VFW lost its charter to operate due to a decision by state VFW officials. 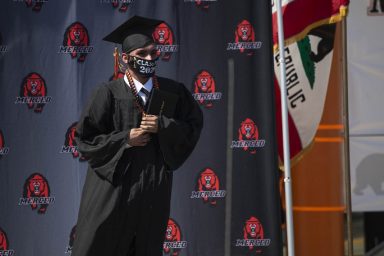 MAKESHIFT GRADUATION – Members of the Class of 2020 were unable to attend in-person graduation ceremonies. Instead, they climbed into cars with family members and took part in a drive-thru event where they received diplomas and a chance to take a picture. 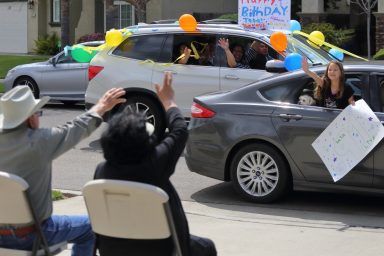 DRIVE-BY CELEBRATIONS — As shelter-in-place orders came down from Sacramento, countless residents found themselves either celebrating special days from afar or engaging in drive-by celebrations to maintain social distancing.

SHELTER FROM THE VIRUS — Monica Villa kneels just inside the door of her hotel room along with her dog Dory-fish. Villa made the local news once again in 2020 for entering the mayoral race as a candidate while also participating in the statewide Project Roomkey program for seniors and other vulnerable residents who are homeless during the COVID-19 pandemic. 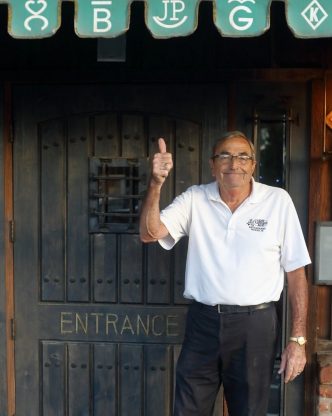 HANGING ON — Greg Parle, owner of Merced’s landmark Branding Iron restaurant, gives a thumbs up sign despite mandated restrictions that have forced eateries to close or limit dining areas, banquet rooms and bars. 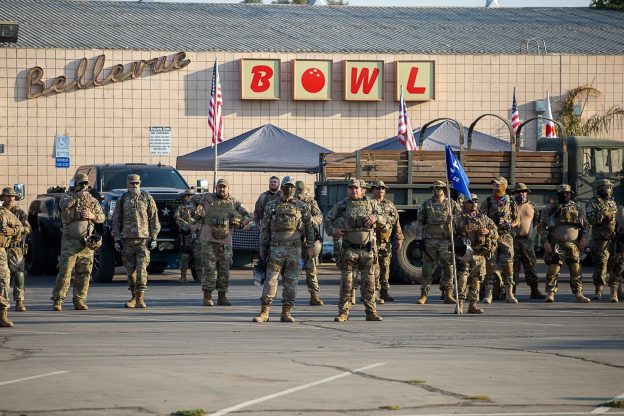 MILITIA COMES TO ATWATER — The City of Atwater witnessed the arrival of a California militia group during a day of demonstrations by Trump supporters, members of the Proud Boys and Freedom Angels, and activists with the Merced People of Color and the Merced Black Alliance. 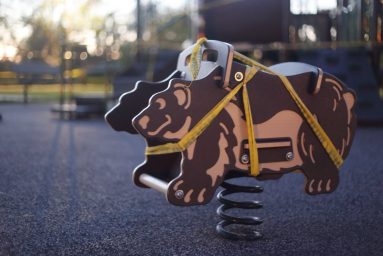 SIGN OF THE TIMES – A playground feature is wrapped with caution tape as part of shutdowns ordered by local and state health officials. 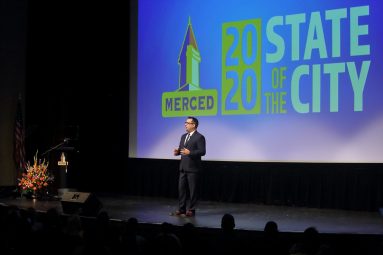 CITY ON THE RISE — Merced Mayor Mike Murphy gives his final State of the City presentation in early 2020. His upbeat speech focused on new commercial and infrastructure developments that are changing the profile of the fastest growing city in California. 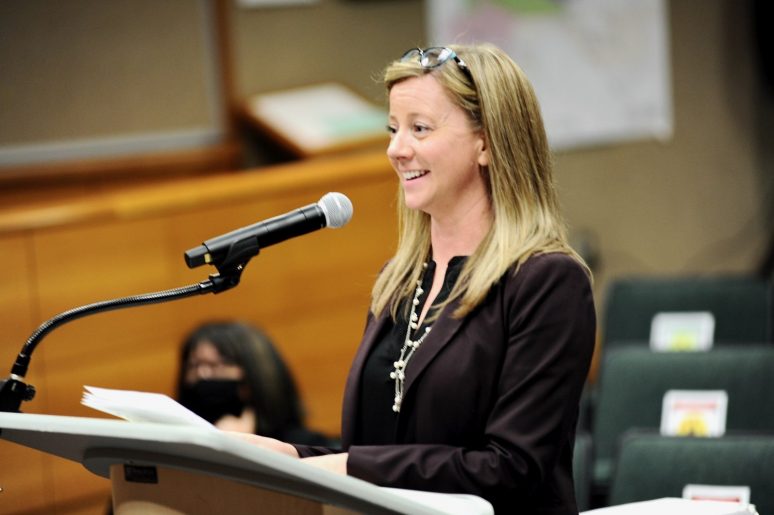 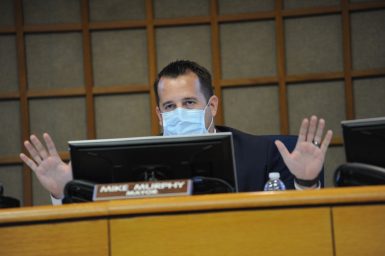 EVERYBODY WILL GET A CHANCE TO SPEAK — A normally calm and collect Mayor Mike Murphy becomes a bit nervous as he tries to retain decorum during a City Council meeting filled with Black Lives Matter protesters. 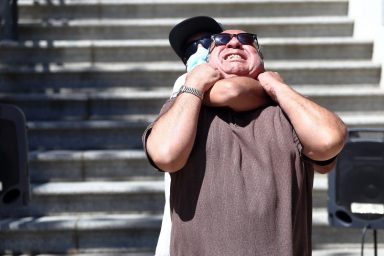 CONTROVERSIAL TOWN HALL – A resident puts a chokehold on Merced City Councilman Fernando Echevarria after the leader requested him to do so in order to demonstrate how the manuever can be dangerous if used by police. The display during an outdoor town hall meeting on police use-of-force policies infuriated many of the residents present who complained it was offensive. Echevarria would later be censured by his colleagues on the council for his actions during a period of local protests marked by the Black Lives Matter movement. 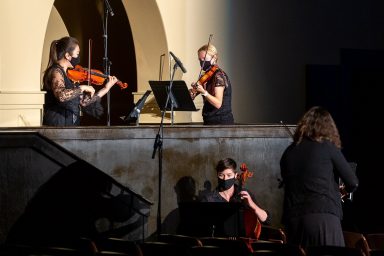 CONCERTO VIRTUAL – Many entertainment-based groups, including the Merced Symphony, turned to online streaming in order to continue connecting with their audiences during the pandemic. 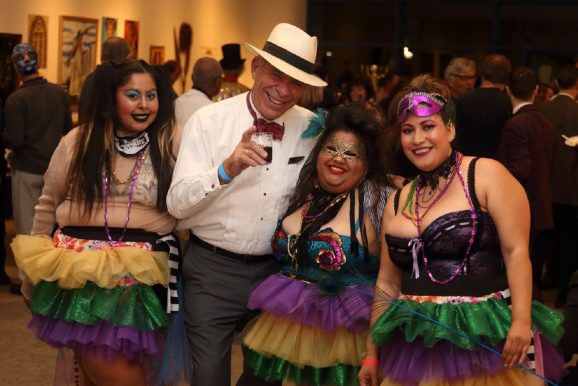 THOSE WERE THE DAYS — Before COVID-19 swept through the Central Valley, a good crowd of Merced residents celebrated Fat Tuesday with a Mardi Gras Celebration at the Merced Arts Center. 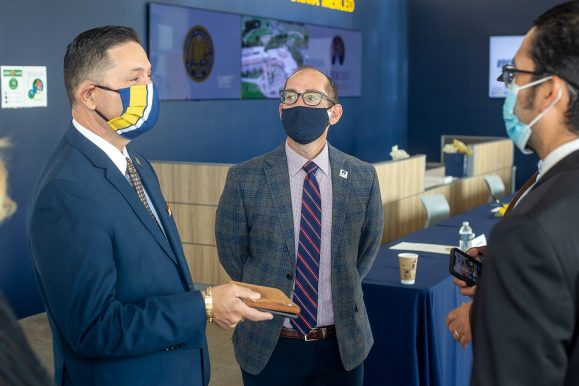