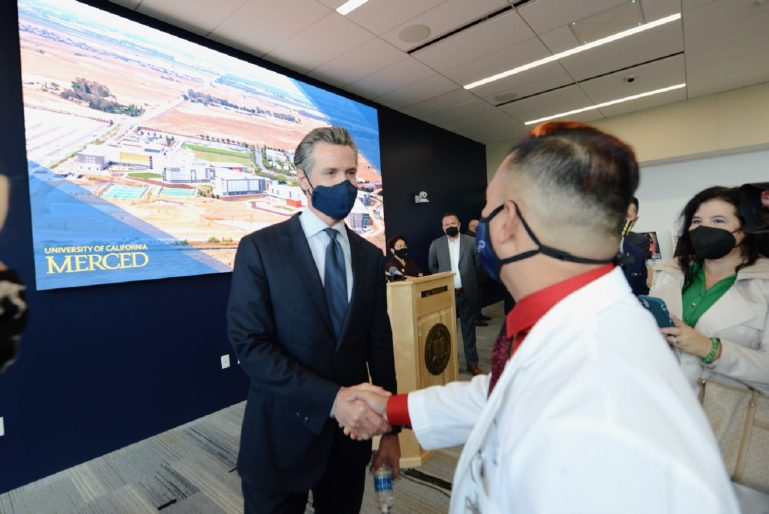 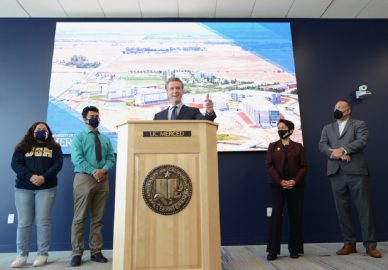 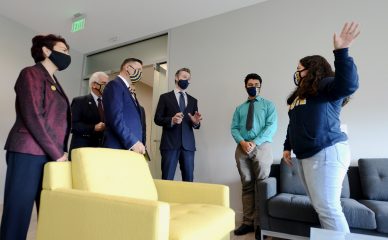 Gov. Gavin Newsom speaks with UC Merced students prior to a news conference on campus Monday. 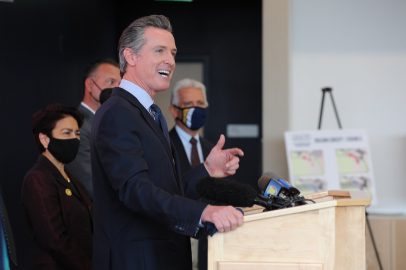 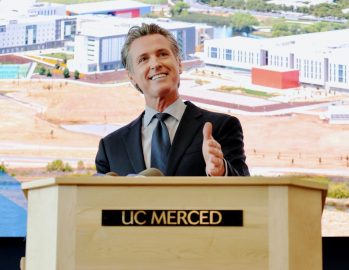 California Gov. Gavin Newsom pledged his support for a proposed medical school during a visit to the UC Merced campus on Monday. The governor also met with UC students and local leaders. 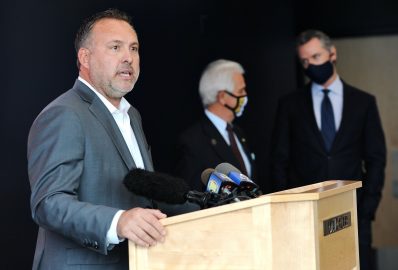 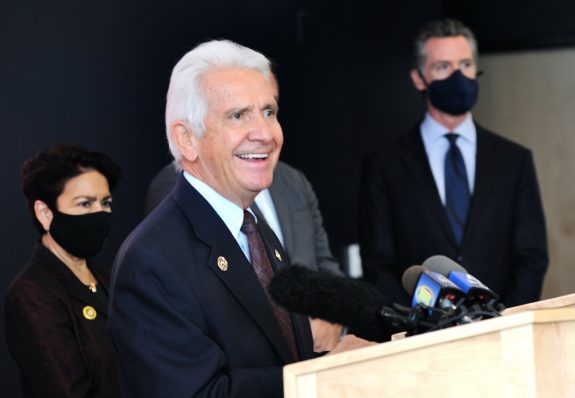 Congressman Jim Costa: ‘It’s a milestone day. When good people come together, we get things done.’ 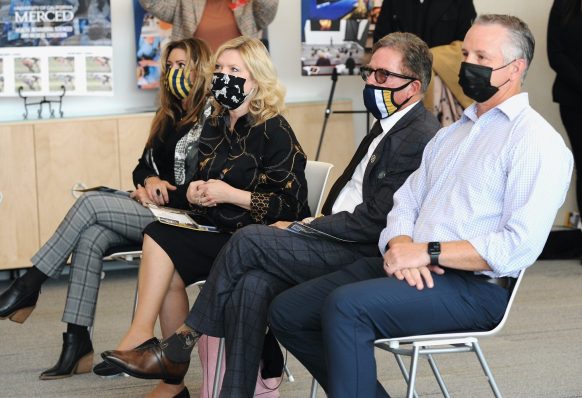 Gov. Gavin Newsom visited UC Merced this week to personally tell UC officials, local elected leaders, community members, and of course students, that the State of California will support the building of a new, on-campus medical education building for the university.

“The Central Valley community has been living with unfair health outcomes for too long,” Gov. Newsom said. “Zip codes shouldn’t be a pre-existing condition. UC Merced’s Medical School will be the first of its kind for the community, providing local students with opportunities to both learn closer to home and serve the communities they grew up in, while also working to confront the most persistent health challenges facing the Central Valley head-on.”

The new Health, Behavioral Sciences and Medical Education Building, with a price tag of $210 million, will support a B.S.-to-M.D. joint degree program with UCSF-Fresno, starting in 2023, along with public health and psychological sciences faculty and students. The facility and its various departments and programs are expected to serve approximately 2,220 undergraduates by 2030. When mature, the joint medical education program will train 48 medical students per year on the UC Merced and UCSF-Fresno campuses. Students will earn their MD degree from UCSF.

“We hope that students stay in the valley and serve the people who made their education possible. To develop the talent, it takes time. But this is the beginning,” Newsom said.

Assemblyman Adam Gray, who worked with the Newsom administration to secure the funding, said it took a collaborative effort bring this together.

“Establishing a medical school at UC Merced has been a dream for more than 20 years,” Gray said. “Today that dream becomes a reality as we establish a branch campus of the best medical school in the country right here in the San Joaquin Valley. The medical school will truly transform the health care landscape in one of the most underserved regions of California. This is by far my proudest accomplishment. I am extremely grateful to Governor Newsom for making Valley health care a priority.”

“We need to have more physicians and nurses,” Costa said. “When we’re bringing physicians from other parts of the country to Fresno and nurses at an extravagant cost, it’s because we don’t have enough doctors and nurses here. It’s real simple. How do you change that? You make the investment.”

Said Caballero, “There’s never been a more precise time of the need for resources in the valley than in a middle of a pandemic. Thank you to the state for its contribution.”

Chancellor Juan Sánchez Muñoz said the financial support from the state would be significant not simply to UC Merced but the San Joaquin Valley.

“Medical education has been part of the plan for UC Merced since before we opened our doors to undergraduates in 2005,” said Muñoz. “This was driven in large part by the critical lack of health care professionals in the Central Valley, a problem that has only gotten worse. The historical significance of this future facility to our campus and our region cannot be overstated.”

Governor Newsom’s 2020 State Budget included $15 million in ongoing funding to support the operation of the medical program, while $210 million from the state’s general fund has been set aside for construction. UC Merced received $7.8 million in AB 94 funding and the university is targeting $4.2 million in campus funds for design and CEQA studies.  Also, Congressmen Jim Costa (D-Fresno) and Josh Harder (D-Turlock) have written a federal bill that designates $15 million for the medical program.