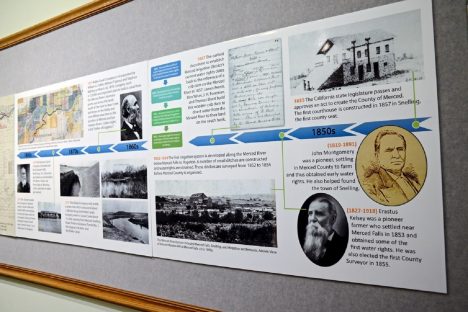 The exhibit features historic photos, artifacts and a detailed timeline, from the 1850s and early water rights, to the building of the dams, to today’s complex agency known as the Merced Irrigation District. 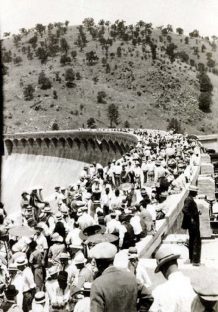 People gather atop the original Exchequer Dam dedicated in 1926. 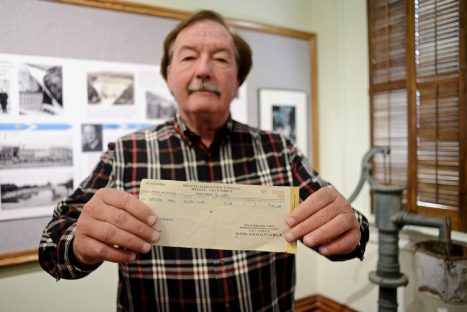 Grey Roberts holds up an MID paycheck he earned as a teen at the end of the 1965 summer work season.

Acres and acres of prime farmland. Row after row of trees and crops. A network of creeks and canals.

Every day we’re reminded that we’re home to one of the most important agricultural regions in the world.

But how many of us know the history behind our great, reliable water supply that makes it all possible?

It’s the story of early pioneers, ranchers and businessmen with a big vision. And it’s the story of an agency formed with a worthy mission to help a farming community continue to grow and thrive with the ever-changing times.

This Thursday, Nov. 7, starting at 5 p.m., the Merced County Courthouse Museum will open an exhibit that explores the origins and impacts of the Merced Irrigation District that was founded 100 years ago. Admission is FREE to this festive anniversary celebration. Dignitaries in attendance will include MID General Manager John Sweigard, MID Board President Scott Koehn, County Supervisor Daron McDaniel, Merced Mayor Mike Murphy, and Farm Bureau President Gino Pedretti.

Historical Society President Neil Morse will be the master of ceremonies, and at 6 p.m., special presentations will take place, including oral histories by Grey Roberts, Kathleen Crookham and Doug Fluetsch.

The exhibit itself features historic photos, artifacts and a detailed timeline, starting with William G. Collier — the “Father of Irrigation” — who incorporated the Robla Canal Company in 1870 so that he and other ranchers could get water on their lands from the Merced River.

It was the first irrigation enterprise of its kind in the entire state.

That effort led to an acquisition in the early 1880s by the Crocker-Huffman Land and Water Company and the eventual construction of miles and miles of canals. By 1919, nearly 50,000 acres were being irrigated from Livingston to several miles south of the City of Merced.

Local residents voted in November of 1919 to establish the Merced Irrigation District, and in 1922, the District purchased the Crocker Huffman system for $2.25 million. The Exchequer Mining Company on the Merced River was chosen as the ideal location to construct the district’s first dam.

The original Exchequer Dam was completed in the mid-1920s. Once constructed, it was 326 feet high and allowed for storage of 281,000 acre-feet of water in the newly formed Lake McClure.

By the 1950s, MID officials were planning for a larger dam that would provide even more water storage, flood control and hydroelectric output. Upon completion in 1967, the New Exchequer Dam had a crest elevation of 879 feet, and McClure’s storage capacity was increased to 1,024,600 acre-feet of water. Also, the hydroelectric project was able to produce about 100 megawatts of clean, carbon-emission-free energy.

The Merced Irrigation District, which currently employs about 175 people, has become part of the community fabric.

At Thursday’s event, watch out and listen for interesting conversation from local residents who have an anecdote or two related to the district.

One of them will be Grey Roberts, a native Mercedian who became a successful accountant, businessman and treasurer of the Merced County Historical Society.

But before all that, he was a high school teenager in the mid-1960s working to clear waterways and canal banks for MID.

Roberts said he was given a pitchfork and a scythe, and he worked all summer long getting rid of tall grass and cutting down moss in the canal.

He remembers getting waste deep in water, bugs crawling up his legs, running away from angry bumble bees, and running into wild animals like Muskrats. And the reward: Less than $12 a day in pay.

Nevertheless, Roberts got used to it, stuck with it, and learned a valuable lesson about saving every penny.

“It was a lot of work for what I was making really,” Roberts recalls. “I was really the only one that went back every year. A couple people on the field crews had a few years under their belt, but nobody was dumb enough to go back for seven years.”

The summer work every year — that also included changing giant tires and other maintenance work at the Franklin Yard and working on the company payroll process — helped Roberts buy a car and get through college, but it didn’t stop there.

“When I graduated from college, I had a Bachelors of Science in Business, but I went back to work at MID because I had the potential of being drafted, and I was afraid to make plans, because the government may have made plans for me. So I was reassigned to the weed crew. I came full circle. Here I am with a pitchfork in my hand, again, and a bachelor’s degree in my pocket.”

Gray’s best memories include some hair-raising experiences. Like the time they were burning brush on a canal bank and the wind direction changed.

“You have a barbed wire fence on one side, and the canal on the other side, and so you have no place to run except down the canal bank as fast as you can.”

Then there was the time, out on East Olive Avenue, when a foreman handed Gray a hatchet and a head light, and told him to climb down some stairs, about eight or nine feet under the ground, and crawl into an MID water pipe about 42 inches in diameter with no room to turn around.

He was told to remove whatever it was that was blocking the water flow.

He calmed his nerves and slowly went down the hole.

Did Grey succumb to claustrophobia? Did he encounter a wild animal? Or did some MID crew member working upstream accidentally release the head water down the pipe?

You can find out the answer on Thursday night, Dec. 7, at the Courthouse Museum when Gray and others talk about their MID experiences. See you there!