Sheriff: We will be a heck of ‘tag team’ 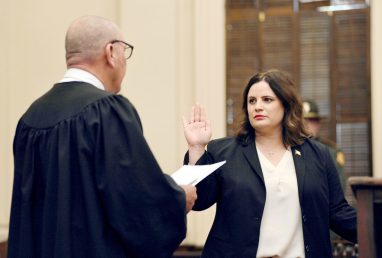 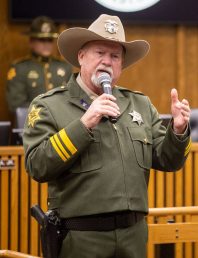 Sheriff Warnke speaks to well-wishers after he was sworn into a third term in office.

District Attorney Nicole Silveira addresses the audience that was packed into the historic courtroom of the Merced County Courthouse Museum. 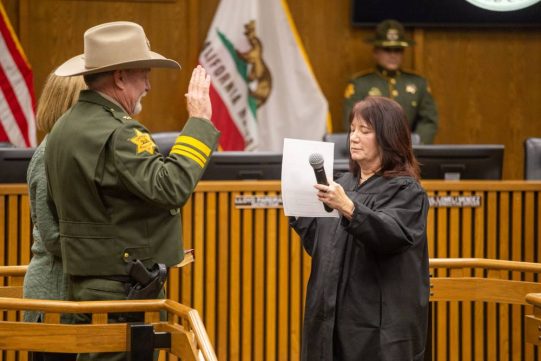 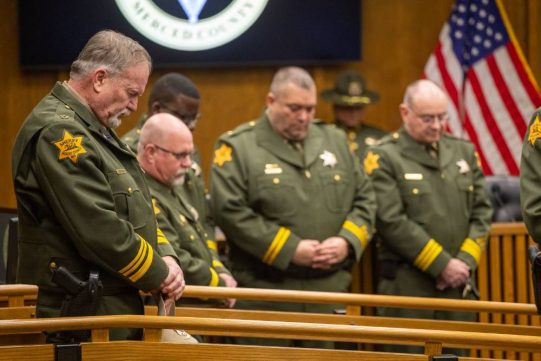 A moment of prayer for the top brass at the Merced County Sheriff’s Office.

The two most powerful people in Merced County’s law enforcement community — newly-elected District Attorney Nicole Silveira and re-elected Sheriff Vern Warnke — have been sworn in to commence their respective four-year terms, both promising to work together to fight crime and improve the quality of life for residents.

“My responsibility to justice extends beyond the courtroom and into the community to make sure we build a safe home for all citizens of Merced County,” Silveira said to an enthusiastic audience packed inside the historic courtroom at the Courthouse Museum on Monday afternoon. “In making our community safe, we must make sure violent offenders are held accountable and work proactively to keep murders from skyrocketing yet again. We must invest in our children and make sure they graduate high-school so they can go on to lead successful lives and be productive members of society. We must look for comprehensive solutions to those struggling with mental health and substance abuse problems, so they too can contribute to our community.”

A few days earlier, Sheriff Vern Warnke took the Oath of Office for the third time since he was first elected to the top law enforcement position in 2014.

“Its been an absolute pleasure and an honor to be your sheriff, and I don’t take this lightly,” Warnke told those in attendance inside the supervisors chamber of County Administration building. “The long weekends — sometimes you can’t even go on vacation without worrying about what’s going on in the county. And it’s not always bad guys that you’re worried about. Right now what we’re worried about is floods and making sure we’re all protected from that… I can’t thank you enough for the support that I do get from the community, and our Board of Supervisors have supported me through a lot of things, and I know that there will be a lot more, and that we will get through it.”

Warnke also gave a nod to his new counterpart at the District Attorney’s Office, and the prosecution side of the law. “I got to tell you once she gets in and gets her feet wet, we’re going to make a heck of a tag team —on both the bad guys and making sure that the citizens are taken care of.”

Silveira returned a few kind words of her own for the sheriff on Monday.

“Sheriff Warnke,” she said, “the way you extended yourself to help me succeed is unparalleled by any other… It is incredibly humbling to have someone so invested in your success and I cannot thank you enough.”

The new District Attorney thanked Vincent Andrade, the county’s public defender, who she interned for during her first year of law school. And she thanked criminal investigator Darryl Davis.

“The very first murder trial I worked on in the DA’s Office was with you, and my late friend, Larry Morse. It was homicide in which an 11-year-old boy saw his father gunned down and killed in the middle in the street. Larry was the lead prosecutor and you were the investigator. I learned so much from both of you in that case— about how to put on a trial, what a good work ethic was, but most of all, I learned about compassion. Both of you conducted yourselves with so much compassion for others, and it’s something I strive to emulate every single day.”

Both District Attorney Silveira and Sheriff Warnke took time to honor their family members in front of all their friends and colleagues during the swearing-in ceremonies.

Said Silveira: “My sister Ashley, brother Adam, and all of you sitting in the front row — too many to name, thank you not just for being here today, but supporting me throughout my life. My parents, Joe and Paulette, I am so grateful to be your daughter, and to have you by my side today is one of the greatest blessings in my life.”

A teary-eyed Warnke thanked Kathy, his wife of 41 years. “If it wasn’t for her, there would be no way I would be sheriff.”

He said her love, devotion, strength and trust “runs the Warnke household,” and allows him to go out every day and be able to focus so intently in his role as sheriff of Merced County.