• Gray vs. Duarte in toss up • Soria with slight edge over Pazin 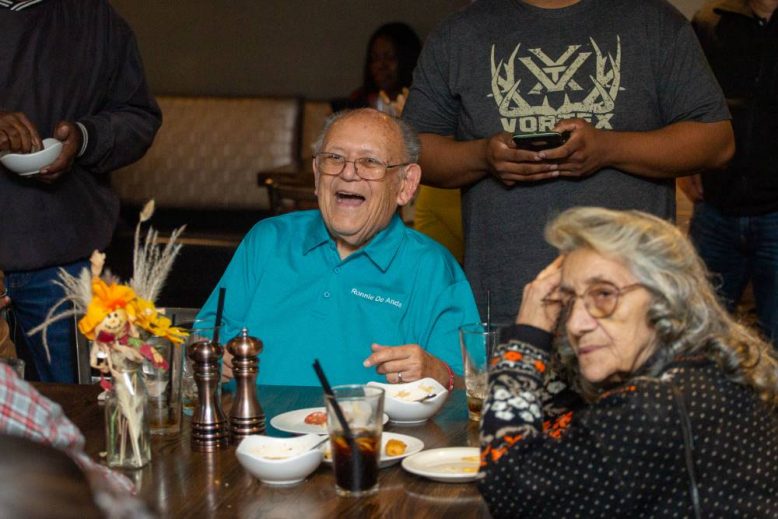 Ronnie De Anda, a candidate for the District 2 seat on the Merced City Council, reacts to Election Night results during a watch party at 510 Bistro in Bob Hart Square. De Anda appears to have soundly defeated incumbent City Councilman Fernando Echevarria by garnering nearly 70 percent of the vote tally as of Wednesday morning. 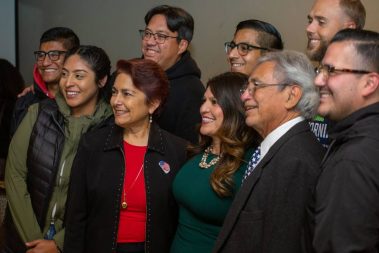 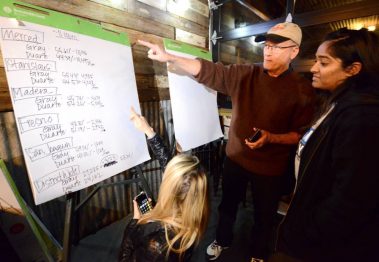 Adam Gray for Congress campaign supporters look at early results inside The Tarmac at Castle. 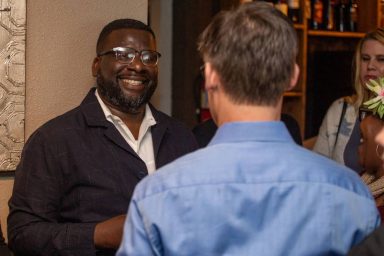 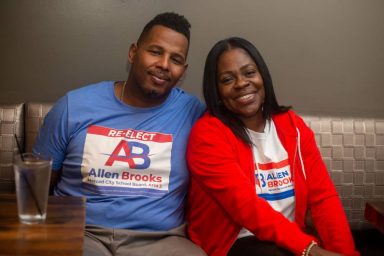 Allen Brooks and his wife Sheila on Election Night in Merced. It looks like Brooks will be re-elected to the Merced City School District. 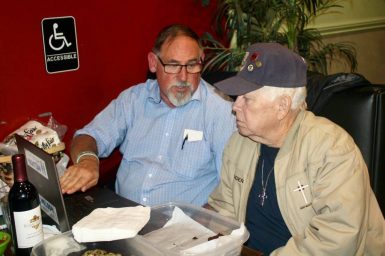 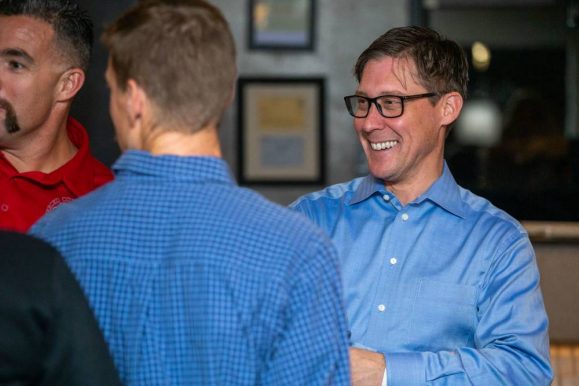 Shane Smith enjoys a sizable lead in his race for the District 4 seat on the Merced City Council. 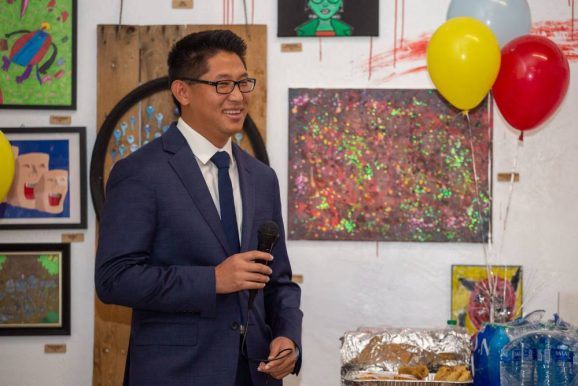 in a few Council races

The Election Night drama that played out on TV sets across the nation was no different in the Merced area and its local races.

There were surprising results, too-close-to-call situations, and cautionary mention that more ballots need to be counted.

It’s important to note that by the next morning, Wednesday, many precincts were listed as “partially” reporting since vote-by-mail, provisional, and other ballots will continue to be processed.

In the key battleground of California’s 13th Congressional District — which includes Merced County — Modesto farmer and Republican John Duarte held a slight lead with 50.1 percent of the vote so far over Democrat Adam Gray. It was 34,715 to 34,515 — a difference of only 200 votes.

Earlier Tuesday, Gray held the slight lead, including in Merced County, which he has represented as State Assemblyman for the past decade.

“This election doesn’t end until every vote is counted, and the people make their voices heard,” Gray said. “But I am ready to hit the ground running to bring down the cost of living, increase wages, and make the Valley a better place to live and raise a family.”

It’s been a heated election for both the 45-year-old Gray and the 56-year-old Duarte, with attack ads from both sides landing in mailboxes, on air, and online. The race has attracted some $15 million in campaign funding from outside the district to support the candidates.

The newly-established District 27 seat represents Merced, Madera and Fresno counties in the State Capitol. Soria is currently a Fresno City Councilmember and Pazin is the former Merced County Sheriff.

Pazin was cautiously optimistic on Election Night, holding his campaign party at the Marriot Courtyard Hotel in Merced with many local residents in attendance. Soria joined State Senator Anna Caballero at the Bella Luna restaurant in Merced for a enthusiastic get-together with supporters.

For her part, Senator Caballero ended up ahead of her opponent Amnon Shor by morning with 55.3 percent of the vote.

The fate of this year’s races for the Merced City Council was expected to determine the future decision-making at City Hall on issues such as public safety and housing development.

It looks like things such as support for an extension of the half-cent Measure C public safety sales tax is safe with two proponents likely to win seats at the dais.

The 81-year-old former postal carrier proved to be too much for Echevarria — a first-term city leader who had been censored by colleagues for remarks he made in public during the aftermath of the George Floyd murder. He also opposed putting Measure C on the ballot this year, saying now was not the time. Interestingly, the City of Atwater did put a full 1-cent sales tax public safety measure on this year’s ballot and it looks like it’s going to be approved by voters.

Measure C proponent Shane Smith appeared to be on his way to victory in District 4 (Central-North Merced), leading a field of two other candidates, with 48.74 percent of the vote (1,101 votes). Casey Steed was trailing with 751 votes, followed by Javier Fuentes with 395 votes.

“The results are looking great and we hope they hold,” Smith told the Times. “The first thing I would want to do as a councilmember-elect is to have meetings with people around the community and kind of get set on priorities and then really understand where the city is going. … I really think what the No.1 priority for the next council is going to be getting Measure C funding back in front of the voters and really shore up public safety immediately.”

Only a tie would be tighter in the race for the District 6 (North Merced) seat on the Merced City Council.

Political newcomer and community activist, Fue Xiong, was leading incumbent Councilman Delray Shelton by only one vote. It was 856 to 855 on Wednesday morning.

This has been a bitter race between a Sheriff’s Department administrator and a City Council critic who has argued to reimagine law enforcement funding. It’s also a race marked by tens of thousands of dollars in campaign funding. Much of Xiong’s campaign support has poured in from an outside advocacy source based in Los Angeles and the Bay Area. Shelton was supported by the local business and the law enforcement community.

On Election Night, some political insiders speculated that if this race stays close, it could go to a special election, or face litigation due to an earlier mistake made by the county’s Election Department. Some 2,000 ballots were sent out in early October with the wrong names of City Council candidates, and this affected District 6. The county sent out corrected ballots a few days later.

“I have faith that we will come out on top,” Shelton told the Times. “We did the right thing with our campaign. It’s the people’s choice.”

The candidate said he realized his re-election would be an uphill battle when an illegal campaign flyer with his picture and campaign logos started appearing on doorsteps with misleading information. He said the move affected his communication with constituents.

On Election Night, Xiong told his supporters: “We have to make sure we build a better Merced for all of us, not just a very few. … We’re all going to have to rely on each other as we continue — as we continue to fight — because it’s only a matter of time. It’s not if we’ll win, it’s a matter of when we make up the majority of this city. We’re gonna let them know that.”

“Knocking on more than 4,000 doors gave me the opportunity to talk and listen to people all across our city,” Nelson said. “Seniors concerned about costs, parents who worried about neighborhood parks, young couples with small children concerned about finances and safe neighborhoods. People struggling to make ends meet. And sometimes doubting they will be able to do so. … I will be a mayor who acts on behalf of all Atwater residents in everything I do.”

Nelson added: “I also want to recognize the work John Cale has made to our city during his time on the council. John will remain on the council for at least the next two years, and I look forward to having a productive working relationship with him and the other members of the Atwater council.”

Cale was obviously disappointed with the election result, but he told the Times on Tuesday night that he was happy Measure B — the city’s 1-cent public safety tax — was on its way to victory, with 2,593 YES votes (74 percent) compared to 96 NO votes (25.89 percent). A 2/3 vote was required for the measure to pass.

“It’s going to be good for the city,” he said. “The Measure B committee did a fantastic job.”

Too close to call

In another race with a razor-thin margin, Atwater City Council candidate James Murphy was leading incumbent City Councilman Danny Ambriz by only 6 votes, 269 to 263.

Stay tuned for more on this one.

As of Wednesday morning, the county’s Elections Department has reported a general voter turnout at 23.21 percent or 28,931 voters casting ballots in the county. The number of register voters in the county for the election was at 124,665.

Elections officials will continue to count each ballot with a final certification date for the election of December 9th.

Tim Razzari was in the lead for the Area 2 seat on the Merced County Board of Education.

‘Thank You’ for those who support our Field of Honor