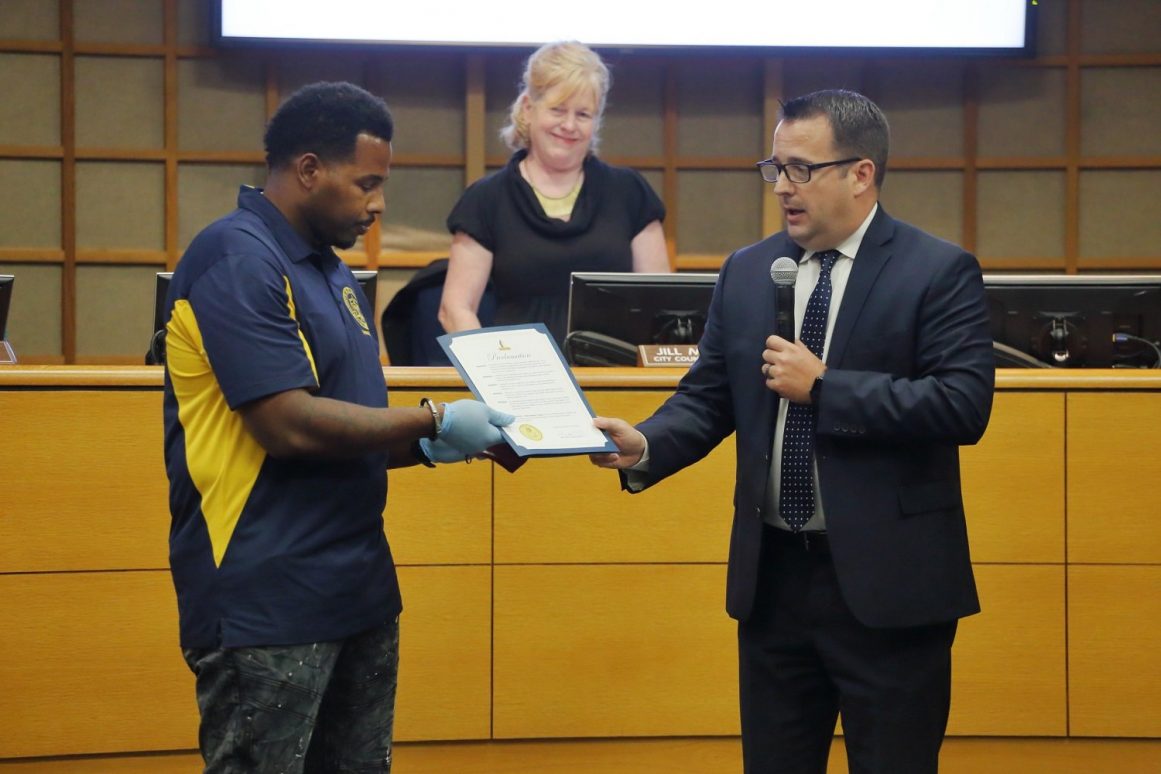 Allen Brooks of the NAACP receives a city proclamation for the Juneteenth holiday from Merced Mayor Mike Murphy as City Council member Jill McLeod looks on. Observed on June 19, Juneteenth is the oldest nationally celebrated commemoration of the ending of slavery in the United States.

Allen Brooks, the president of the local chapter of the NAACP, has announced his intent to run for the District 3 seat on the Merced City Council in the November election.

The seat that notably covers a large swath of downtown Merced and the Main Street core is currently held by Jill McLeod who was first elected to the position in 2016.

“I am running not only to continue the positive things that presently exist, but also to help improve the communication between the community and local government,” the 42-year-old Brooks was quoted as saying in a press release issued on Monday night before the most recent City Council meeting.

“For example,” he continued, “who determines which streets need repairs and improvements? Why some streets repaired and others are not? These are questions that we need to continue asking ourselves. In addition, it is important that we share responsibility in improving our neighborhoods and make sure that our budget spending meets the needs of our residents and not of special interest groups. The purpose of our city taxes is to see how we can best provide better services for our community as a whole.”

Brooks is a native of Milwaukee, Wisconsin, and he attended Grambling State University in Louisiana. He achieved a bachelor’s degree and master’s degree in communications with a background in public administration. In 2005, after college, the candidate moved to the Central Valley soon after college.

“I fell in love with Merced the same way I fell in love with my wife — love at first sight,” he said. “I remember thinking, ‘This is a community I would be proud to raise my kids in.’ Now I consider myself a native of the valley.”

“I am dedicated to continuing the growth of Merced and District 3; I am committed to transparency; I will always be for the citizens of Merced; and I look forward to exceeding your expectations of me as a member of the Merced City Council,” he said. “Together we can make a difference.”

In addition to his work with the NAACP, Brooks is a local real estate agent with Realty Executives, and he is also a member of the Sunrise Rotary Club.

Said Brooks, “As a young man of 42, I never dreamed of being a multimillion-dollar agent, living in California with three children and a beautiful, awesome wife, and running for City Council.”