My dinner with Lorenzi … and other good people

The Our Lady of Fatima statue in the new Rosary Garden at St. Patrick’s Church in Merced.

A wonderful backyard dinner on a pleasant Valley evening. 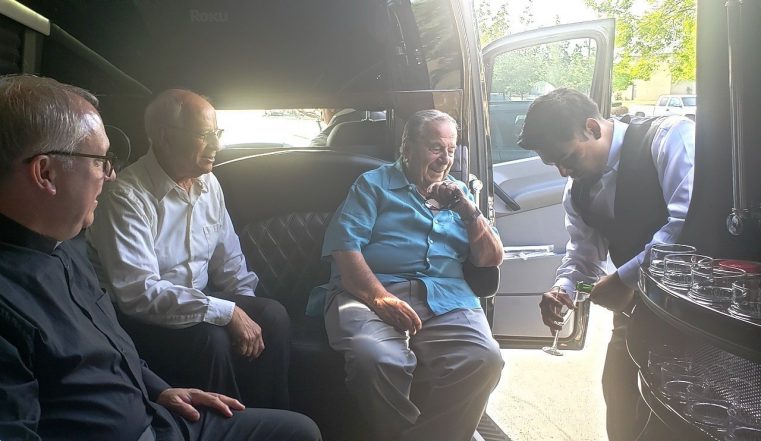 Pouring Champagne in the open limo before the trip to Fresno.

To be honest, I had no idea where we were going.

Mr. “E.J.” Almo Lorenzi called up a month prior and he told me to not make plans for a Friday night in late April.

“We have a wonderful evening planned Jonathan,” he said. “You don’t have to do anything. Just show up. We have a limousine lined up. We’re going to whisk you away. It’s gonna be great.”

One thing I have learned over the past decade is that when Lorenzi says something like that, you just say “yes” because it’s bound to be something special.

One time he called me up to go to an outdoor wedding on the steps of the Courthouse Museum. It turned out to be a fantastic story about two Merced High sweethearts in the late 1940s who were separated after their families moved, but incredibly found each other many decades later, and ended up falling back in love. For the reception, we traveled to a packed community dinner inside the Le Grand American Legion Hall. I’m not sure, but I think our wedding party seniors were crashing the local event. Later, we later had drinks at Lorenzi’s beautiful home on Bear Creek.

Another time, Lorenzi invited me to be a guest at his family table at a wonderful outdoor dinner on the grounds of the Joesph Gallo Farms estate to support the regional Catholic Professional & Business Club. There was plenty of food, wine and a folk band was playing. There were plenty of movers and shakers there, but above all, Bishop Armando Ochoa of the Fresno Diocese showed up, said a prayer, blessed the dinner, and came around the table to talk.

So recently, I received a surprise golden note in the mail inviting to me to a dinner at the Fresno home of former Catholic Charities Executive Director Kelly Lilles. I still wasn’t sure what the occasion was all about, but a small group of Mercedians met at the St. Patrick’s Church Parish parking lot. Lorenzi was there, and so was his good buddy Jim Rosa. Father John Fluetsch was there too, along with contractor Dennis Riskey, former Merced City Councilman Michael Belluomini, and a couple other noted parishioners.

We quickly boarded one of those custom Mercedes Benz vans with limo-style seating, darkened windows, nightclub lighting, a couple flat-screen TVs and yes — a wet bar. Before we knew it, we were drinking Champagne and the luxury vehicle was moving through the streets, only we couldn’t see outside.

So we started talking.

And there appeared to be a reason why Lorenzi invited each one of us there.

Riskey, for example, has just finished the Rosary Garden project at St. Patrick’s where the faithful can go and pray. He talked about the project that started more than four years ago with inspiration from Merced parishioner Mary Helen Rodriguez, along with Father Fluetsch’s support. He even became a little teary-eyed while talking about how the parish community stepped up with big and small donations — more than 150 separate donors — raising more than $100,000 dollars.

There’s been sponsorships for everything, the rosary path itself, the benches, the “mystery markers,” the boulders in the landscaping.

The most impressive donation came from the Lorenzi family in the form of a 5-foot-tall statue of Our Lady of Fatima, the patron saint of the Portuguese. She’s imported from Italy and made of sparkling white Italian marble.

“The statue is one of the most beautiful new things in Merced right now,” Riskey said.

He’s also excited that the public will have a chance to see the new garden on the eventing of May 11 during a special blessing, Mass and Portuguese-themed Festa celebration.

I also learned some new things from Belluomini, who happens to be on the Catholic Charities leadership board in Merced. The organization helps local people, regardless of their faith, who are struggling with poverty, hunger, homelessness, and other complex issues. There is a center on Main Street, and every dollar donated goes right back into the program to help individuals.

The Fresno diocese has put in considerable effort to grow the program in Merced.

Well, Belluomini started talking and I soon discovered that his late brother — Monsignor “Father Ralph” Belluomini — was the well-known and well-respected Catholic priest responsible for growing the entire Catholic Charities program across the northern Central Valley.

Sometimes you think you know the person you’re seated next to, and then boom, you suddenly realize you’re just getting to know them.

We were greeted by the Lilles family and a team of Catholic Charities volunteers playing dinner hosts. We were led into a beautiful patio in the backyard where more people — including Father Patrick McCormick were enjoying red and white wine with appetizers.

Someone said that Bishop Ochoa lived in the neighborhood, but that he was entering retirement. Someone else pointed out that St. Anthony of Padua Catholic Church was also nearby. That’s where the Diocese of Fresno ushered in a new era this month with the installation of Joseph Brennan as the sixth bishop in Diocese history.

Under a quaint awning and pleasant outdoor fans, a wonderful table setting was located for our party to enjoy. On the menu was braised pork loin with a plum reduction sauce.

In the middle of dinner and great conversation which included topics such as how a priest travels in Italy, and the hardships of keeping private Catholic schools in operation, Lorenzi stood up and made a toast.

And I finally learned about how this dinner came about. It turns out, it was an “exclusive group dinner” auction item at the most recent Catholic Charities annual Harvest of Hope fundraiser. Lorenzi was the successful bidder, and Lilles threw in the limo ride because the vehicle owner owed her a favor.

I guess I was invited to spread the word.

Lorenzi thanked Lilles for her 11 years of service to Catholic Charities, and her efforts to build up the effort in Merced, which took countless trips to the community. He also welcomed in the new director — Jeff Negrete — who took the help last fall, and has pledged to continue the mission in our county.

“Jeff is going to build a pipeline to Merced, and he is going to help expand operations,” Lorenzi said. “Merced is the best of the best, and in a short time, Jeff has proven he can do the job. We are excited.”

Lorenzi also thanked Fathers Fluetsch and McCormick for all their hard work.

Regarding new improvements to St. Patrick’s Church in Merced — including the new Rosary Garden — and the local Catholic Charities mission, Lorenzi made a promise.

“This is only just the beginning,” he said, “but I can’t tell you more because I’m sworn to secrecy.”

Groups organizing to gain seat at the table

A word or two about priorities in the City of Merced

Just own the night like the Fourth of July