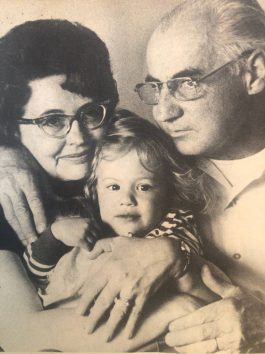 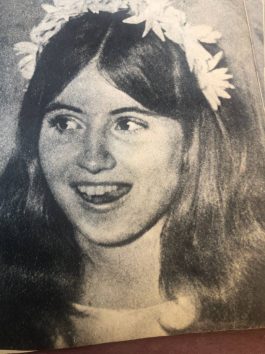 Mary Jo Bennett was murdered in 1972. 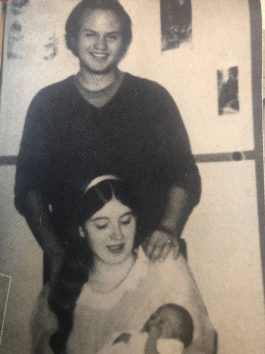 Timothy and Mary Jo Bennett with their newborn Rachel in 1970.

The note found in Mary Jo’s bedroom in Merced after she went missing.

In 1972, Mary Jo Bennett, a Merced County resident, disappeared without a trace, never to be seen alive again.

Her disappearance and the subsequent prosecution  of her husband, Timothy Bennett,  for murder resulted in the most famous  criminal case in Merced County history.

The prosecution of Bennett  for first-degree murder was the first case charged and tried in California where there was no confession and no body.

As the story unfolds, you will see that Mary Jo displayed incredible presence of mind just seconds before her death!  Her quick thinking did not save her life, but pointed the finger at her executioner and allowed her mother to raise Rachel, Mary Jo’s two-year-old daughter, as her own.

Here is what happened:

Timothy Bennett and Mary Jo were married in 1968. Their daughter, Rachel, was born in October 1970. Soon, marital troubles began, and Tim and Mary Jo constantly argued about Rachel. Tim said he would give Mary Jo a divorce if he received custody of Rachel.

Mary Jo, with Rachel, left Tim in the summer of 1972. They lived several weeks with her parents, Walter and Ida Mae Kempel, in Alameda, and in October, they moved to Merced to live with Mary Jo’s brother and his wife.

That same day, Walter and Ida Mae, the parents of Mary Jo, were at  home in Alameda when shortly after  6PM, Tim arrived in a hysterical state of mind.  He was shouting and yelling that his wife, Mary Jo, had run off with a man named “Pete.”

Mary Jo’s parents scoffed at Tim’s allegations.  However, because Mary Jo and Tim were in the midst of a divorce and a custody fight, they were extremely concerned for their daughter’s safety.

Two days later, Mary Jo’s brother found two notes in her bedroom.  One of the notes referred to “Pete.”

It read as follows:

You are my best friend

and always will bee.

I want you to know how  hapy I am,

I mete a  far out guy  named Pete.

I am going  away with him

When the Kempels read this note, they placed Rachel in hiding and set out for Merced.

Garibay and Johnston  investigated Mary Jo’s disappearance for 22 months. During that time, Tim’s van was examined and faint blood stains were discovered on  the inside of the passenger door panel.  The blood was type A, but unfortunately, Mary Jo and Timothy both had Type A blood.

During the  investigation, Timothy  took a lie detector test from State Agent Sam Lister.  Lister claimed Bennett was untruthful when asked, “Did you kill your wife?” and he answered “No.”  Lister also claimed that Bennett showed deception when asked if Mary Jo was buried in a river bed because Bennett tightened up when the word “river” was mentioned.

The Kempels retained Los Angeles psychic Peter Hurkos, credited with solving the Boston strangler case, to advise the Sheriff’s Department.  Hurkos declared he saw Mary Jo in water below Lake McSwain, a dam on the Merced river in the foothills. The spillway was closed and the river drained for several miles.  A search and dragging of the pools did not yield the body of Mary Jo.

Johnston and I would pick up Tim and take him to Stanford while he was interviewed. We would wait outside and when he was through,  drive him back to his home in Merced.  On each occasion he made what appeared to be statements that were incriminating but always couched in a dream.  Tim did tell Dr. Lunde that in a dream he had seen himself with a rope in his hands and his wife’s face turning blue!

I felt that Tim wanted to tell us just enough to keep us investigating him, but not enough to arrest him. A dangerous  game. I suggested he take “truth serum” but he refused.

After over 22 months of investigation, I felt it was time to close the case or take Tim to a “Grand Jury.”  There had been no sighting of Mary Jo during the last two years.  No checks had been written, no letters received from her by her friends, and no driving activity.  I was convinced she was dead, and now we had to convince the Grand jury.  We presented 22 witnesses.

District Attorney Hallford cautioned me not to encourage the Grand Jury to return an indictment.  He wanted to make sure that without encouragement, using their independent judgment, they believed Tim had committed murder. The Grand Jury returned a bill of particulars on Sept 3, 1974, and the trial began in late November.

The trial lasted three  weeks. The key evidence in the trial was the note about “Pete” with the six misspelled words.  Terrence Pasco, a handwriting expert, testified the note was written  by Mary Jo.  The defense agreed.  Stanford University was very cooperative and provided me the name of  an expert witness on their faculty regarding the skill of spelling!  Dr. Paul Hanna was qualified by Judge Donald  Fretz as an expert witness on the subject  of “spelling”

Dr. Hanna testified that he had reviewed numerous term papers and letters written by Mary Jo.  It was his opinion that she was a proficient speller and would never have misspelled the six words in the note  about “Pete” unless she misspelled  the words intentionally!

Dr. Hanna also testified  that he had reviewed letters and college papers written by Tim Bennett. His opinion was that Tim was a very bad speller as exhibited in his numerous writings.  Dr. Hanna also said that Tim would not realize that Mary Jo had misspelled the six words since he had no competence  in spelling.

The night after Dr. Hanna’s testimony, Johnston called me and said that a skeleton had been discovered in a cistern on a ranch in Mariposa.  We agreed we had to check out the bones, and so we agreed to meet the Mariposa recovery team at the ranch where what appeared to be human remains were discovered.  We arrived at midnight and were directed to an abandoned  cistern.  A Mariposa search and rescue deputy lowered himself into the cistern and came up with a skeleton!

Unfortunately  it was that of a a small calf!

We got back to Merced at 3AM in the morning and got some sleep before the next day of trial!

Other evidence was presented, but the key evidence was the note and Dr. Lunde’s testimony.  During closing arguments to the jury, I argued that Mary Jo, knowing she was about to die, left a cleverly disguised note pointing out her  killer!

The jury began its deliberations on Dec. 11, 1974.  I received a call  that night at  11PM  from the Merced County Jail.  The dispatcher said that Tim was attempting to hang himself and I should get down to the jail immediately!

I remember saying “Don’t cut him down until I get there!”

I arrived in minutes, went to his cell and sure enough there was Tim, still alive.  He had a makeshift rope still around his neck made out of neckties and a sheet.  He had written a suicide  note to Johnston, Garibay and me.  I was offended that he spelled my name, “Qwall.”

The notes were pathetic but we called Mary Jo’s mother, Ida May, at 2AM, and she came from her hotel room to talk with Tim.

We waited outside the jail cell and after 30 minutes brought Ida Mae out to talk with us.  She was very brave in keeping her emotions in check, but Tim only talked about what happened to Mary Jo in his dreams.  We sent her back to the hotel and retired for the night.  Any statements he made were useless since his attorney was not there.

The jury returned a verdict of murder in the first degree on Dec 12, 1974.  Bennett was sentenced to life imprisonment by Judge Donald  Fretz.  Garibay and Johnson and I  went to Vacaville with Bennett to make sure he got there.  He actually asked me if I would write  a book with him about the case.  I would present the State’s case and he the rebuttal!

Two years later in 1976, Bennett’s conviction was reversed because  on one of Bennett’s visits to Dr. Lunde, the record did not show a Miranda Rights advisement.  The state appellate lawyers had argued that no advisement was necessary since Tim was not arrested.  I personally think the appellate court  was unsure of his guilt, but will never know.

I remember telling Johnston, we will try him again and get the same result!  However, just prior to the second trial, Ida Mae and her husband approached  Hallford and requested that we reduce the first  degree charge to second degree if Tim would produce Mary Jo’s body.

At that time, Murder 1 incarceration for most cases was only eight years, and second degree about four years.  Hard to believe, but several years later the penalties were significantly increased.

The detectives  and I agreed to let Tim enter  a plea of guilty to murder in the second degree.  He and his attorney prior to the plea took me, Garibay, Johnston, and two others to find Mary Jo!

Bennett led us up I-5 about 50 miles.  We took a turn off to a county road, and there 100 feet from the freeway, we began to dig.  Eventually, we brought in a back hoe, and after an hour, we found Mary Jo.  Located around her neck, which had decomposed, was the rope Tim used to strangle Mary Jo immediately after she wrote the note. Mary Jo had been in the front seat of Tim’s van when she was strangled.

After the ordeal, Mary Jo’s family gave her a proper burial.

Tim was released eventually from prison in 1978 and died three years later from cancer.

Ida Mae and I are close friends and have exchanged Christmas cards for the past 48 years.  She has written two books regarding her daughter’s death.

Rachel is now 50 years old, living in the Bay  Area.

Mary Jo could not save herself, but she made sure her killer was brought  to justice.

Robert Quall is a former Merced County Superior Court judge and a contributing writer to the Times.