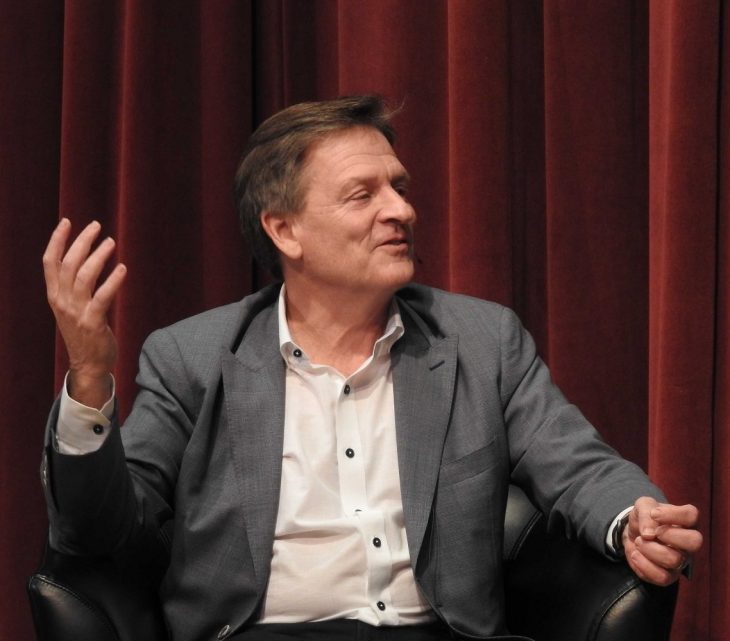 ‘Take 20 percent of your brain, and experiment with some part of your curriculum. It will pay in so many ways.’ 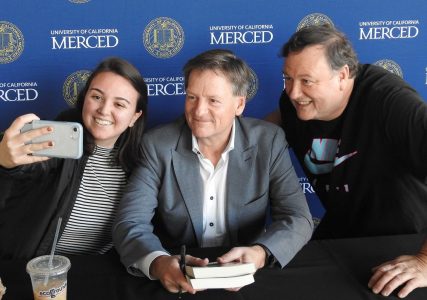 Fans of author Michael Lewis take photos with him, at center, after a speaking engagement at UC Merced. 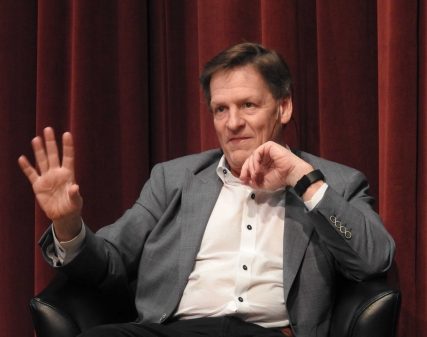 ‘What does this say about today’s rich and powerful people having more equality thrust upon them? They are going to turn around and destroy the referees, such as they have done with the Consumer Financial Protection Bureau.’

Lewis’ remarks were in front of a packed house of approximately 500 people who had RSVP’d in advance for the second in a series of “Conversations with the Chancellor” at UC’s Lakireddy Auditorium entitled “The Future of Markets.”

Rather than being strictly about the future of markets, the conversation, hosted by Interim UC Merced Chancellor Nathan Brostrom, ranged over a plethora of topics covering sports, financial regulations, writing, modern communication, social class, politics and fairness.

Lewis is a non-fiction writer primarily known for his popular and entertaining books on economics and sports, such as Moneyball, The Big Short, and The Blind Side, all of which were picked up by Hollywood and turned into academy-award nominated films. The author of close to 30 books, Lewis is also a dynamic and entertaining speaker, who has recently branched out into a regular podcasting series called “Against the Rules.” The series is to be aired in seven loosely linked seasons, having to do with the volatility and pressures felt by authority figures in today’s America.

After graduating Princeton University, where he majored in Art History, and the London School of Economics, Lewis says Wall Street noticed him. He wasn’t seeking to work there, but shortly after earning his advanced degree from LSE, he walked into a trading position at Salomon Brothers, a Wall Street trading firm. He says they paid him an insane amount of money. His experience there, or inexperience as he describes it, became fodder for his best-selling book, The Big Short, which profiled the people who profited in a predatory manner off the financial crisis of 2008. A big takeaway Lewis garnered from his experience on Wall Street was the need for regulation in this system, which tended to use people up, take their money, and spit them out.

Following lengthy repartee with Chancellor Brostrom, where it was established the two had been friends for twenty years, a friendship cemented with a common interest in drinking beer and hiking, Lewis began talking about his book,

Moneyball. That book, ostensibly about the sport of baseball, is actually about the business of baseball, mainly dealing with how low-budget teams, like the Oakland A’s could compete with high dollar teams such as the New York Yankees, who could afford to buy up all the good players in the league and win all the games.

The secret to preventing that, says Lewis, who hung out with the A’s for a season, is how the players are valued. The good looking players were being paid at much higher rates than the ordinary or downright ugly players, even though the brawny and handsome ones performed at lower levels much of the time. The A’s owners knew this, and had their pick of the lower valued, but higher performing players.

Enthusing about his podcast, Lewis admits his is the first one he’s ever listened to. He notes that writing a book is strictly an individual sport, while doing a podcast is a team sport. All these people are involved, editors and production people. “It’s like making little movies,” he says. Podcaster Malcom Gladwell got him into it. Gladwell is a friend who told him, “it’s really easy, really fun, and you make a lot of money!” After he jumped into it Lewis found, “It’s really hard, it IS really fun, and you don’t make a lot of money.”

The first episode was about Referees, all the people tasked with ensuring fairness in our society. Unlike in the past, today Refs are given instant feedback on their calls, and consequently are making fewer mistakes. This tends to outrage fans and players alike, who have been used to their home court advantage, ranging almost always 3 or 4 points a game. Lewis attributed that to the refs normally giving the calls to the home team and their star players. He asks, “What does this say about today’s rich and powerful people having more equality thrust upon them? They are going to turn around and destroy the referees, such as they have done with the Consumer Financial Protection Bureau.” That regulatory agency was put into place in 2010 to ensure events like the Crash of 2008 would never happen again.

Lewis says UC Merced is going to be in his podcast, pointing out that the student body consists of 74 percent first generation undergrads. That percentage of students coming from families having had no other college experience, represents a significant change in the class of people who are now able to attend college. On the downside, this is shown to be traumatic for many of these students, who drop out more often because of the class differences and real or imagined family pressure. This has given rise, says Lewis, to College Coaching Programs on campus, which after being introduced, have nearly doubled the amount of first generation grads.

In the closing question and answer session, Lewis cautioned people “be wary of people offering advice,” but he did happen to have some thoughts about first generation students, for what it was worth. Above all, he says, “Don’t walk away. Don’t take the easy path. The value of getting through a place like this is so great, that every effort should be made to see it through.”

Secondly, Lewis urged, “Don’t succumb to the incredible pressure to turn this into vocational training, like thinking only of becoming a doctor. Take 20 percent of your brain, and experiment with some part of your curriculum. It will pay in so many ways. It is riskier than you can imagine to only want one thing, like being a doctor, because you don’t know how the economy is going to change.”

“So,” Lewis says, “try not to be just one thing.” Take it for what it’s worth from an experienced Writer, Stock-Broker, Pod-Caster, Sports Analyst, and keen observer of modern society.