MID named ‘Business of Year’ by Chamber of Commerce 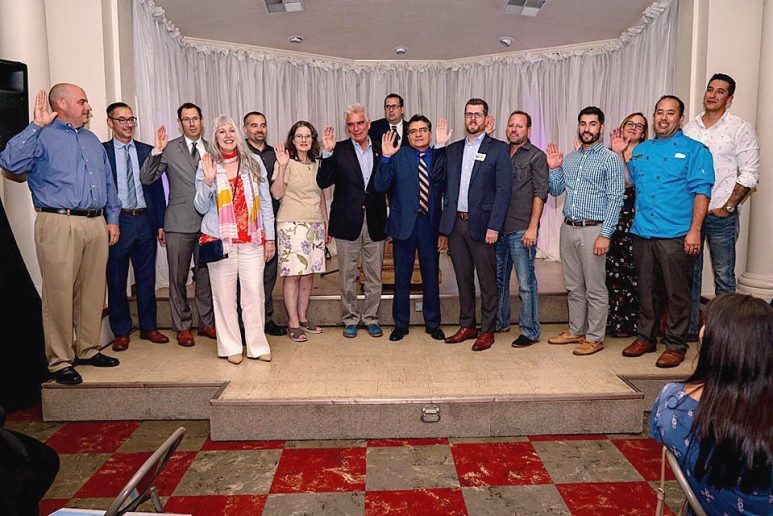 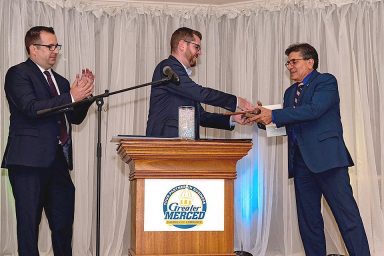 Mayor Mike Murphy looks on (left) as outgoing Chairperson Kyle Hampton (center) of the Hampton Firm passes the gavel – and the big job it represents – to the capable hands of the 2019 Chairperson Joe Ramirez (right) of Rabobank. 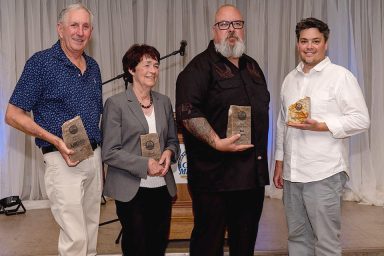 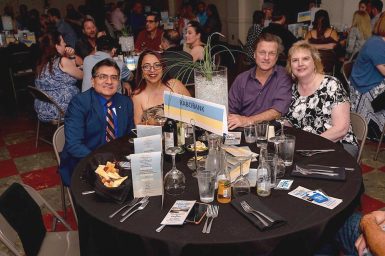 Rabobank representatives were honored with one of the best tables. 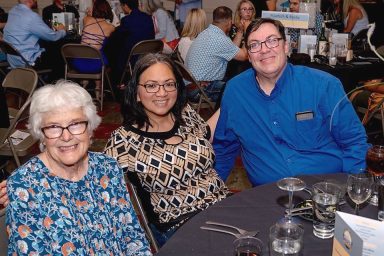 MERCO Credit Union was well represented at the dinner. 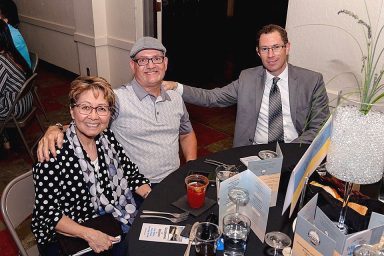 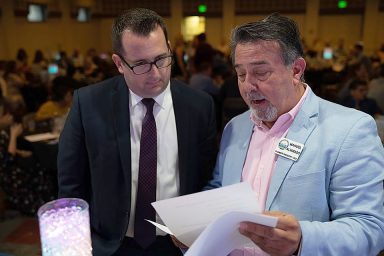 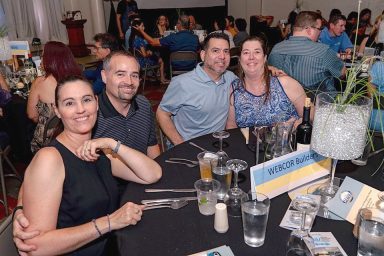 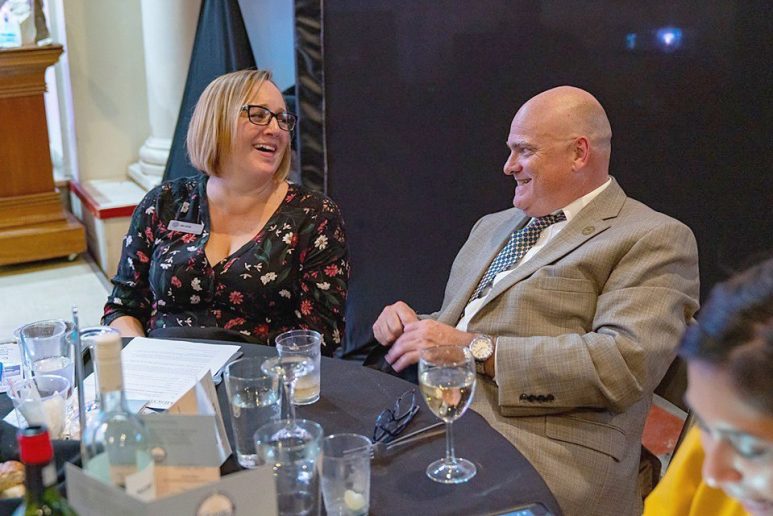 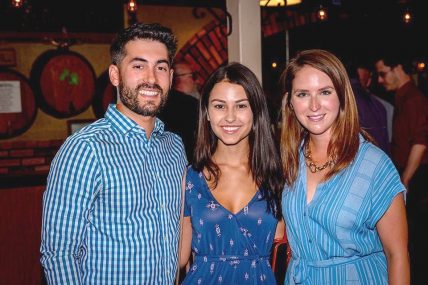 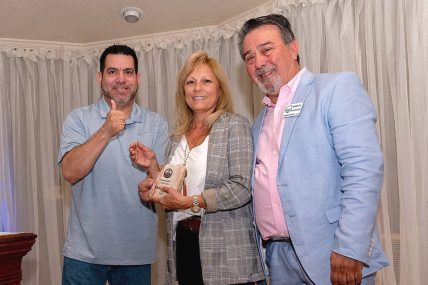 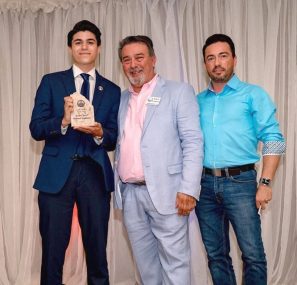 The Merced Irrigation District (MID) was named Business of the Year by the Greater Merced Chamber of Commerce at its annual Installation and Recognition Dinner held last Friday, June 14.

Dave Long, MID’s board chairperson accepted the award, along with Mike Jensen, the district’s manager of public and government relations.

“Ours is an amazing story,” Long said, noting MID is currently celebrating its 100th Anniversary. “Eight hundred miles of canals run through our area. We provide power to 10,000 customers for at least 10 percent less than PG&E rates.”

He added, “This is the biggest honor I can accept.”

Jensen told the guests that MID plans a big party in November to celebrate their centennial. He said people may get information online at: MIDisThere.com. The chamber also showed a video presentation showing much of MID’s history.

“This is our 83rd year serving businesses of Merced,” said Manuel Alvarado, the chamber’s president and CEO, as he opened the ceremonies. The dining room at the Italo-American Lodge was full of guests, laughter and colorful lighting.

“Our theme this year is ‘Layers of Leadership,’” Alvarado continued. “And tonight it’s my great pleasure to honor many of those who are leading in this community.”

UC Merced Chancellor Dorothy Leland was named the 2019 Woman of the Year. She was presented with the award by last year’s winner Mary-Michal Rawling of the Merced County Association of Governments.

“Eight years ago Dorothy Leland came to Merced to head our university,” Rawling said with admiration. “UC Merced now ranks among the top 80 universities in the nation. She has a quiet persona, but underneath she has a steely determination that doesn’t take no for an answer.”

Last year’s Man of the Year, Robert Matsuo of Five Ten Bistro, stepped up to introduce this year’s honoree, Rob Baptie of The Hate Project.

“In 1988 Rob came to Merced and was part of the chamber’s Leadership Class 20, He raises money for charities but I am impressed with what he cares about,” Matsuo told the guests. “He has supported everything from Make A Wish to therapy dogs for seizure victims to U.S. WWII veterans traveling to Washington, DC.”

Baptie was the principal at Juvenile Hall and then started a side job selling things on the internet to raise money for charities. So far he has given away $1.4 million to great causes, helping thousands in this community.

“For years no one knew my name. I am very honored. I know what it’s like to have a small business in Merced,” Baptie said. “But I never felt part of the community until I started working for the community.”

Nicola Adams stepped up to present the Educator of the Year award on behalf of last year’s winner, Susan Walsh of Walsh Cassidy & Walsh.

This year’s winner is Martha Hermosillo of First 5 Merced County. She has a long career of helping kids as a counselor and founder of the STEP Program.

Adams noted that she had been one of the students who received counsel from Hermosillo.

Neighbor Emily Langdon accepted the award as Hermosillo was also unable to attend. “Martha is a ‘maven,’” she said. “That’s a person who knows everyone and connects people. Mavens are pathologically helpful people. And Martha’s work has led to contributions in our business community,” she said.

The ambassador program promotes connection between people and businesses.

“The program is amazing,” said Ambassador Chairperson Genis Glifford of State Farm Insurance. “It’s a chance to meet and talk with interesting people I wouldn’t meet otherwise. I encourage everyone to look for ambassador candidates within your companies.”

This year’s Volunteer of the Year award was presented to Kevin Hammon of the Merced Art Hop.

Said Hammon: “We are all here because we care. I want to thank my mom for raising me to do what’s right when no one’s looking.”

Andre Santos of Merced Legal Resources announced Jesse Espinoza as Youth Citizen of the Year. He was part of the Youth Leadership Class 44, is a Leo’s Club Advisor and led the first nationally ranked debate team at Merced College. He is currently working towards a bachelors degree in political science at UC Merced.

Espinoza thanked the chamber and his grandparents for raising him right.

“I want to thank all those who do their part in the community,” he said. “As the saying goes, ‘the takers probably eat better but the givers definitely sleep better.’”

Mayor Mike Murphy officiated the transfer from the 2018 Board of Directors to the leadership of the 2019 lineup, as has become a tradition for the past few years.

“Good things are happening in Merced,” Murphy began. “And it’s not just at City Hall. It’s the people that make Merced their home. A strong business community is key to our success in Merced.”

Outgoing Chairperson Kyle Hampton of Hampton Firm stepped up to pass the gavel to Joe Ramirez of Rabobank.

“Leadership is not just a title or position – it’s found in all parts of life. It’s when we show courage to move forward and do what’s right,” Hampton said. “Passing the gavel means finality. I am very pleased to pass it to Joe.”

Ramirez thanked Hampton for doing a great job. “The chamber is active and growing. It’s a great time to be in Merced. People are relocating here. The chamber is strong,” he said.

“If you want to know what’s going on, come into the chamber. We hold Eggs & Issues to provide information. We hold monthly legislative committee meetings on issues that effect the community. And we’d like to do more,” Ramirez said.

Denise Demery of VIA Trailways and Mary-Michal Rawling of Merced County Association of Governments were recognized for their many years of service as they retired from the board this year.

Dinner for the eventing was prepared and served by Five Ten Bistro, featuring a caprese salad, baked bolognese lasagna with garlic bread and asparagus spears. A tasty serving of tiramisu was dessert.

For more information about the Greater Merced Chamber of Commerce call (209) 384-7092, go to their website at: mercedchamber.com, or visit them at 531 W. Main Street.