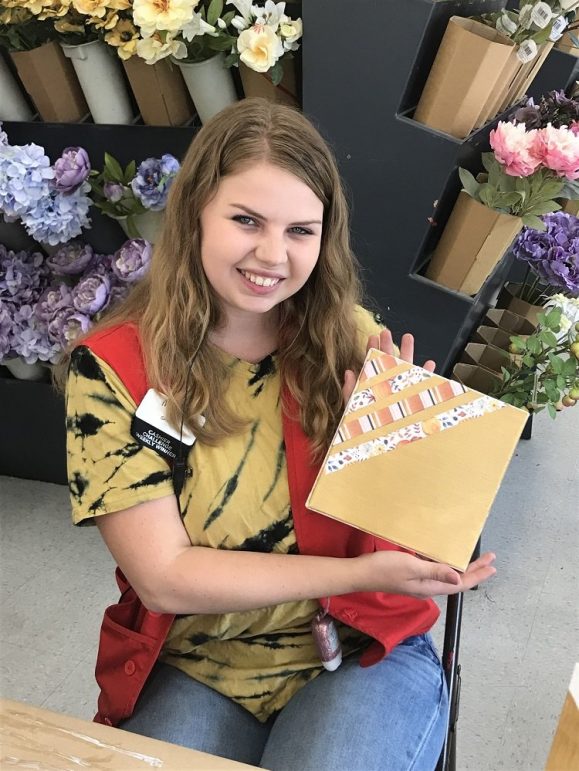 After gluing the strips from her two papers on the canvas, Savina shows the Mod Podge finished product! 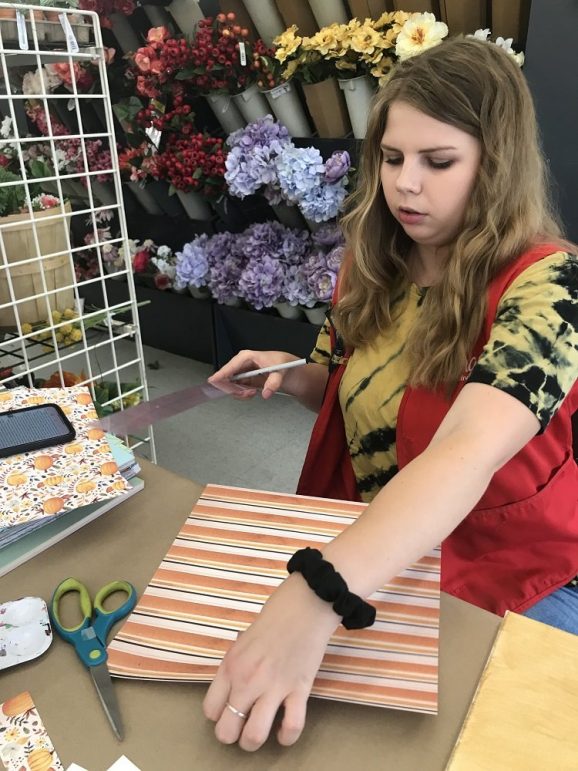 Savina gets ready to cut 1-1/2-inch strips from a paper she chose from the scrapbook-making pages.

Michaels is offering in-person arts and crafts activities at its store located at 655 Fairfield Drive in Merced. Some are exclusively for children.

Cathy Bailey, the store manager, told the Times, “The activity changes every week.

“If the craft is fairly involved, Stephanie, who leads the activities, does a very simple demonstration and the kids actually make the item on Sunday.”

On July 18, the activity was called Mod Podge.

Savina, an employee at Michaels who is interested in pursuing a career in Education and Speech Pathology in the future, was the teacher for the Mod Podge demonstration.

She told the Times, “I’m a crafty person.  I like to make things, and I did some crocheting for a bit.  When I was hired, I told my supervisor that if she ever needed me to teach a class, I can.”

During the Mod Podge demonstration, Savina explained, “I’m going to do a Mod Podge canvas for room decor.

“Mod Podge is a popular glue or adhesive used in crafting.”

Using a sponge brush to paint a small canvas, she dipped the brush into gold paint.

She explained, “I’m painting the entire canvas gold.  It’s important to paint strokes all going in the same direction.  At the end, I do a couple of long strokes to even out the paint.

“I’ll let this dry and then put another layer on because I like my color vibrant.

“I’m choosing a pumpkin paper from the scrapbook-making pages, and using a ruler to measure, I’m cutting two 1-1/2-inch strips from the paper.  I cut those strips in half.

“I’m placing the strips on the canvas and marking the canvas, and then marking the pumpkin paper so I know where to cut my strips.”

She chose another paper and cut strips from it.  Once she had the strips from both papers cut to the size she wanted, she used another sponge brush to spread the glue on the back of each strip.

She said, “I recommend using a sponge brush for placing glue.  Other brushes lose hair fibers, which doesn’t look nice.”

Another tip was to spread the glue evenly and use enough glue.

She placed the strips on the canvas diagonally to make a design.  It turned out very well.

Store Manager Cathy Bailey told the Times, “The next Saturday, July 24, there will be a metal stamping demo, and it’s more for adults because it’s advanced art.

“The next day, Sunday, July 25, the kids will create the first day of school sign.

“They will need to buy a sign at Michaels, and they will learn how to put it together.

“The reason we’re doing it early is we sell out of the signs every year very rapidly.

“The sign will say First Day of School, or First Day of Second Grade, and the crafts teachers will show the kids how to write on them.

“We will take pictures of the kids with the signs.

‘It’s a way to get them excited about going back to school.”