Two leaders flip-flop in vote as tempers flare over process 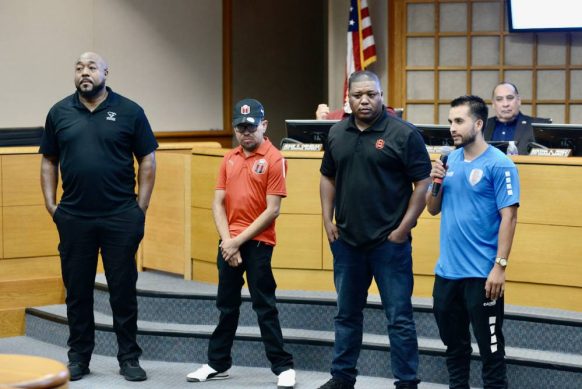 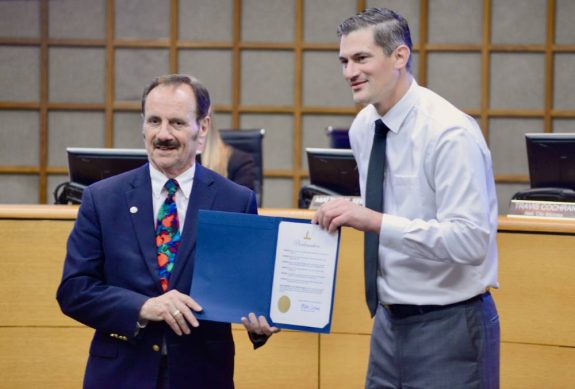 Mayor Matthew Serratto, at right, proclaimed July 13 as the 90th Anniversary of the local Italian Catholic Federation, Branch 39, founded in 1939. The mayor presented a certificate to Michael Belluomini, at left, of the ICF during a ceremony on Tuesday night at City Hall. The organization makes charitable donations to assist with the needs of those less fortunate and to further the research of Thalassemia. The organization also provides scholarships to local high school and college students.

An effort to extend a critical public safety tax in Merced is suddenly up in the air — only two weeks after the City Council gave the OK to create the renewal measure for the November ballot in a majority 6-1 vote.

After a meeting on June 20, city staff worked on an official resolution to place Measure C on the ballot. On Tuesday night, the City Council was called upon again to issue a final vote on the initiative.

This time, however, things were very different and quite surprising.

Council members Sarah Boyle and Kevin Blake were absent from the meeting, while three other council members — Jesse Ornelas, Fernando Echevarria and Bertha Perez — decried certain aspects of how the measure was being handled.

Ornelas had already voted down the Measure C plan in June, arguing that it should include funding for affordable housing. And on Tuesday night, Echevarria and Perez changed their previous YES votes to NO.

So the vote Tuesday was 4-1, with only Councilman Delray Shelton voting YES. Mayor Matthew Serratto — a firm Measure C supporter — joined the NO votes, but only because of a procedural rule that would allow him to make a motion to reinitiate the plan during a subsequent meeting — presumably when all the council members are present.

The original Measure C was approved in 2006 as a half-cent sales tax to support the city’s police and fire departments, as well as road and street improvements, and facility projects linked to public safety and homelessness. It has a 20-year lifespan that sunsets in 2026.

The proposed Measure C renewal, if placed on the ballot and approved by voters, would continue the existing tax, but with one change: The new measure would not expire or “sunset” unless it’s placed on a future ballot and voters choose to terminate it.

City Manager Stephanie Dietz has described the renewal effort as a “big decision” for the council while pointing to recent polling data that indicates strong support from voters. Meanwhile, the mayor has warned that without Measure C, a dark cloud of layoffs would loom over both the city’s police and fire departments. Roughly 30 police and fire department jobs are said to be funded by Measure C.

The surprising discussion and changes in opinion on Tuesday night started out with the public comment.

About five residents spoke out against the city’s plan, saying the community engagement process regarding the Measure C renewal was conducted too quickly. A couple people pointed out that many residents are not even aware that Measure C exists, despite it being on the books for some 16 years. A few said Measure C funding should be directed “more toward the community” for things like affordable housing, youth programs and improving parks.

In contrast, two residents spoke up in support of Measure C, including Robert Dylina.

“What is the harm in putting it on the ballot?” Dylina asked the council. “The way that you get the whole community’s input is whether they vote yes or no. I don’t see the harm in keeping this thing going. It’s an existing tax that we already have that funds very important positions. Some of you may recall, many years ago, we actually were failing state metrics for the number of police officers for our population size. Measure C was one of the proposed solutions to help us hire up to the levels we are supposed to have for public safety. Continuing this tax on seems prudent to me, given that we are now hitting the metrics that we are suppose to.”

After public comment, Councilman Echevarria immediately changed his tune on the issue since the June 20 meeting, saying he has found that the poll numbers are “biased.” He pointed out that only 34 percent of the people polled were from Districts 1, 2 and 3 — those representing downtown and south Merced. He claimed that Hispanics in particular were being left out of the process. And he said he has been hearing from constituents who apparently don’t agree with the city’s Measure C plan.

“Most of the time when I give my word, it’s in stone,” Echevarria said, “but when I’m overwhelmed with emails, voice messages, the public — I have to take a step back. I’m not here to do what I want to do. I have to do what the public tells me what to do.”

Echevarria sharply criticized city staff for making a “grave mistake” hiring the firm that did the polling. He urged his fellow council members to wait for 2024 to put the Measure C renewal on the ballot. The councilman said he had done “extensive” research on his own, and he was confident voters would reject the measure in November.

Councilman Shelton fired back a counter view without hesitation. “This is not a matter of race,” he told Echevarria, and later added: “Maybe people have reached out to you, but we don’t know who votes and who doesn’t vote. The people in your district will have the opportunity to vote, and they will have a voice.”

The two council members proceeded to raise their voices and talk over each other, which prompted Mayor Serratto to bang his gavel and announce a 5-minute recess.

When things settled down, Shelton pointed out that the percentage of registered voters and the percentage of voters who have actually voted in past elections vary by district, and that while all the districts have roughly the same amount of people, they are not equal when it comes to the amount of people who vote in elections — and thus the recent polling samples reflect those numbers.

While the mayor was trying to figure out how to navigate a council vote that was appearing to be 3-2 at that point (four Yes votes were needed to put the measure on the ballot), the City Attorney revealed that leaders had more time to decide than previously expected before a ballot submission deadline put forth by the county’s Registrar of Voters. Council members had been told at the last meeting that the deadline was this week. It turns out, city staff received information late Tuesday afternoon that the deadline date was on Aug. 12, not in early July.

“I feel misled,” he said. “I was told the deadline was today. … This process has been feeling messed up.”

Ornelas went on to accuse the mayor of “keeping a nice secret” until it came out that the measure was at risk of not passing. “You kept that [deadline date change] a secret until you figured out you didn’t have the votes to pass it,” he told the mayor.

The mayor explained that he had only found out about the deadline change in the late afternoon, and brushed off the idea that something was being held secret by underscoring the fact that a previous council majority was very supportive of the Measure C renewal.

City Manager Dietz took responsibility for not sending out a notification about the update received by the Registrar of Voters. She said the city had pushed for clarification, and that they had received three different timelines during the process of drafting the resolution.

From there on the debate stalled, and the council remained split. A motion to approve the resolution that would put the Measure C renewal on the ballot failed.

Nevertheless, there is still the possibility a council member can reinitiate the Measure C process in time for the Aug. 12 deadline for submission to the Registrar of Voters.

Will it happen? Stay tuned.