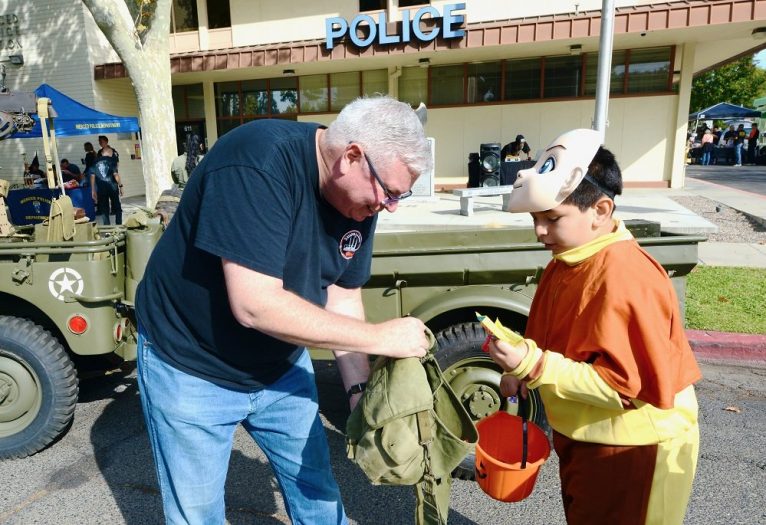 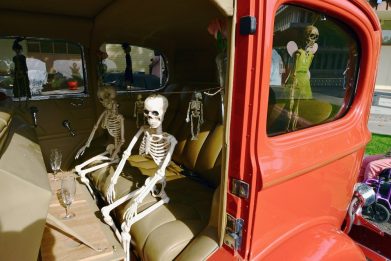 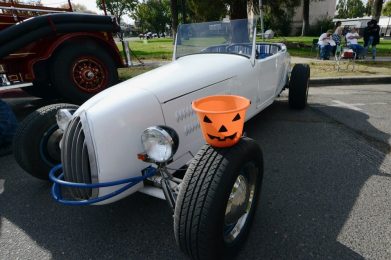 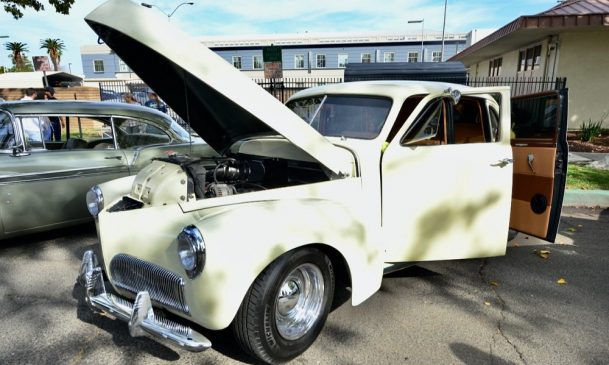 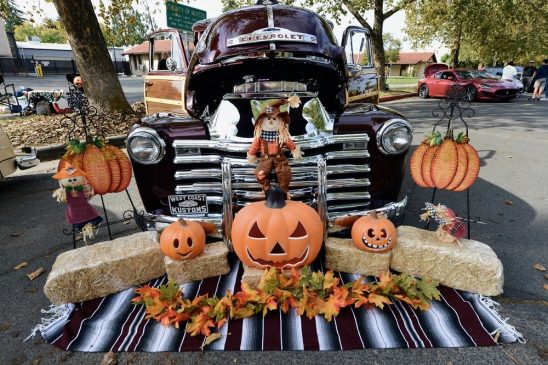 Cops, cars, critters and costumes. These four elements intertwined Saturday as the Merced Police Department staged its first-ever old car show in front of the station on West 22nd Street between M and N streets.

Thirty-nine vintage vehicles shared the spotlight at the show which ran from 10 a.m. to 2 p.m. Uniformed police officers mingled with families and youngsters in their Halloween costumes, eager to fill their sacks with candy. One officer had his wife and children in tow, with his young son wearing a police officer’s “costume.” Even a large white dog had a pink skirt covering her hind quarters, cashing in on the costume vibe.

The beneficiaries of proceeds from Saturday’s car show were the “critters” at the city’s Applegate Park Zoo.

The costume theme extended to several of the vehicles as well. A bright red 1969 Corvette was festooned with large and small spiders, bug eyes sticking out of the oversized carburetor on the hood, plus many cobwebs and frightening visages. To add to the drama, the Corvette’s doors opened in scissor-like fashion.

Spiders, skeletons and skulls filled the seating area of a 1932 Cadillac LaSalle four-door sedan and many old cars had bags of candy draped over their front bumpers to share with young visitors.

Police Chief Tom Cavallero is an old car buff, too. He has a 1920s Ford roadster pickup in pieces in his garage awaiting reassembly and his 1941-vintage Willys Army Jeep in drab green was positioned right in front of the station, its machine gun armament covered up. Across the street was the Merced Fire Department’s 1919 American LaFrance fire engine.

Cavallero’s pick for the top trophy was a 1951 Chevrolet 3100 pickup truck combining elements of the lowrider craze and wood-paneled doors from a woodie station wagon grafted on. The truck belongs to Frank Salcido of Madera. The “Best in Show” winner is driven everywhere, including Southern California and Las Vegas.

A 1980s Cadillac Sedan DeVille four-door sedan adorned with a custom blue paint job and a lavish interior won an award chosen by the police department’s lieutenants and captain.

As with most car shows, variety is the spice of life. A late-model exotic Maserati coupe and a modern Porsche sports car shared space with stock and custom American cars and trucks many years older.

It was hard to pick a favorite but a number of cars stood out. A 1941 Studebaker four-door sedan painted in cream white had rear-opening suicide doors and its distinctive grille and taillights. It also had a fully-dressed V-8 engine with lots of chrome and a custom interior with copper-colored leather seats. Large blackwall tires were wrapped around brightly chromed specialty wheels.

A perennial favorite of mine, a 1958 Buick Century four-door sedan, got lots of glances and up-close looks from showgoers.

Not too far away was a 1948 Ford F1 pickup truck, painted in gleaming fire engine red. It featured a 2 1/2-inch top chop and its vintage flathead V-8 engine was fully dressed with chrome accents and clear red spark plug wiring. Its bed was graced with a large American flag.

Nobody could miss a 1956 Chevy two-door hardtop covered with a late-model Sherwood Green paint hue.

Old car lovers really dig mid-1950s Ford F100 pickup trucks. A 1953 Ford pick with an eye-catching yellow and white graphics package had a tilt-up hood to give people a peek at its high-horsepower V-8 engine.

Right next to it was a cranberry-colored 1954 Ford F-100 and a few spaces down sat another 1956 Ford, this one “borrowing” many of the drivetrain components from worn-out Ford Crown Victoria police cars. A Model T turtledeck roadster got lots of admiring glances, as did a 1973 Chevrolet Nova two-door sedan.

Pickups were prominent with the police show. A 1968 Chevrolet pickup had white and mint green colors, big whitewall tires and cone-shaped chromed wheels. A 1967 GMC pickup also carried forth the fire engine red motif, sitting near a 1967 Chevy Stepside truck.

Several 1951 Chevrolet four-door sedans dressed to the nines with lowrider wheels, tires and chrome accents were spotted. Just as stock as the day it drove out of the showroom was a 1956 Ford Ranch Wagon station wagon, painted in orange-red and cream white colors, with big whitewall tires and small chromed hubcaps. This truck was powered by an original six-cylinder powerplant.

Pony car followers were rewarded by a 1967 Ford Mustang and a 1971 Camaro  Z28. Close by was a nearly stock 1935 Ford five-window coupe with a subdued gray-brown paint job. A 1927 Ford Model T “tall” coupe sat nearby, with a Buick V-6 engine somehow shoehorned between the narrow frame rails.

Cavallero and lieutenants Emily Foster and Dan Dabney happily revealed their show was a success and will be repeated next year. A DJ kept the music coming and food vendors around the corner had tacos and barbecue for hungry spectators. It doesn’t get much better than that.