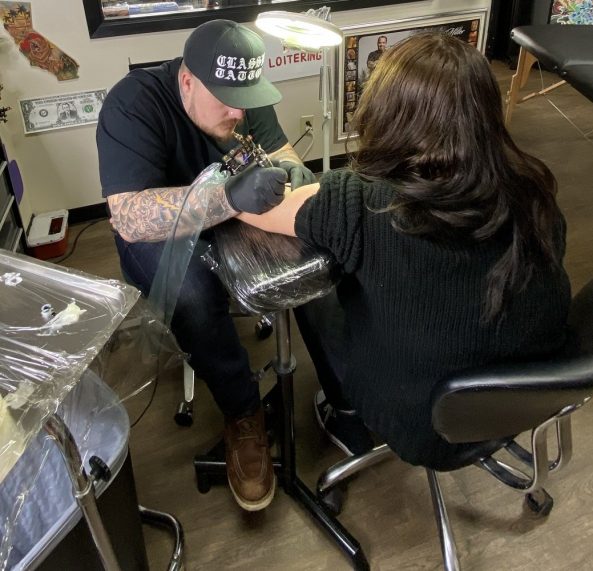 In recent years, tattooing has slowly become a social norm with more and more people finding acceptance in the process that is body modifications. 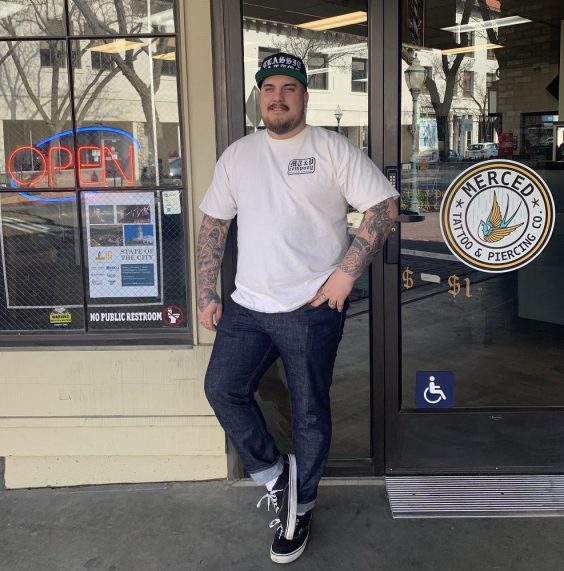 Robert Benson, owner of Merced Tattoo and Piercing Company, built his shop in two weeks with the help of his craftsmanship and the work of his artists.

The history of tattooing spans thousands of years, and can be seen across hundreds of cultures. From traditional practices of tattooing to the modern-day use of the electric tattoo machine, the idea of walking-art is one that has enticed many to participate in the process of permanently tattooing oneself with artistic designs and lettering.

In the last five years, the tattoo industry has seen a great boom partly due to an increase in public acceptance, but also as it is normally broadcasted along different platforms of social media and television.

In Merced, Robert Benson, owner of Merced Tattoo and Piercing Company, located at 534 W Main St, contributes to the growing boom of the industry by offering local residents an escape into the life of body modification.

“Let me tell you,” Benson began as he reflected back. “Ten years ago, if you tried getting a job at a school and they saw you were tattooed — well let me tell you, there would be no way they would let you work around all those kids.”

The industry has come a long way as general acceptance has gained momentum. As the stigma surrounding tattoos decreases, and more people indulge in the practice that is body modification, tattoos and piercings have slowly gained acceptance in present-day societal norms.

“Now, the culture has changed,” Benson continued. “I have tattooed school principals and long-time teachers who are now heavily tattooed.”

From his customer service skills to the aesthetic atmosphere of his tattoo shop, Benson finds pride in the business he has built. Merced Tattoo and Piercing Company became a reality two years ago in May 2018. Since then, Benson has continually held Friday the 13th events and fundraisers at his shop, offering special pricing to customers and adding gratitude to the strong sense of community the artist has for downtown Merced.

The tattoo artist, who is not originally from Merced, was born in Redding; and lived in and out of California throughout his teenage years. After moving to Texas his junior year of high school, he began tattooing. He remembers wanting to get tattooed while underage, and after failing to do so, decided to order a tattoo kit with a friend and take matters into his own hands.

“I tattooed him, and it was horrible,” Benson laughed. “After looking at it I didn’t want him to tattoo me.”

He gradually improved his skill as he consistently tattooed throughout high school and after graduating, went on to work at tattoo shops in Tyler and Dallas, Texas. Coming back to California proved to be beneficial to Benson as he worked on his apprenticeship in Modesto and then finally in Merced at Main St. Tattoo.

After working at Main St. Tattoo for seven years, Benson decided to push his artistry even further, and open up his own tattoo shop.

Two weeks was all it took as he and his artists pushed to have the tattoo shop ready and open to the public.

“We worked crazy hours,” Benson explained. “My apprentice Oscar and artist Juno would work with me from 6 p.m. till 2 a.m. every day for two weeks. We built everything in that shop.”

Concrete countertops and a wood resin-filled table are just two projects that Benson built and added to his shop. The shop has a giant panel of open windows facing Main St. and a LED sign spelling out “TATTOO.”

“My goal was to make a shop that was super bright, airy, and that felt safe for my customers,” he explained. “I wanted to get far away from the traditional tattoo stigma and create a space where people felt safe getting tattooed.”

Benson hopes to continue prospering and provide local residents with safe and amazing tattoo work. He also hopes to open another business downtown before the year is over, and this one is not tattoo related.

Merced Tattoo and Piercing Company is open Monday through Saturday, from noon to 8 p.m., and on Sundays from noon to 6 p.m. To schedule an appointment call (209) 714-4044.