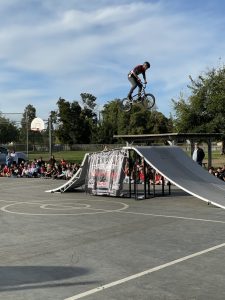 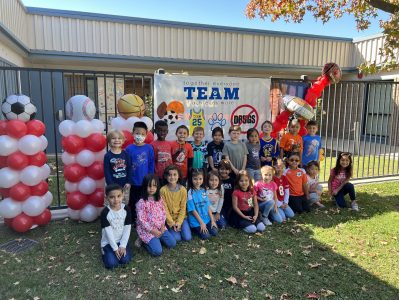 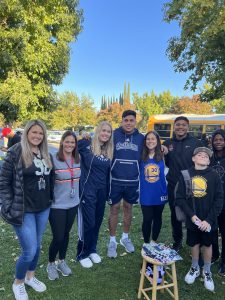 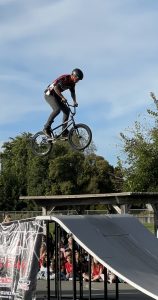 Local students got out of the classroom and teamed up for a recent anti-drug awareness campaign.

Red Ribbon Week, which took place from Oct. 23 to Halloween, is touted as the largest anti-drug school campaign in the nation. It began as a tribute to Enrique Camarera, a Drug Enforcement Administration officer from Calexico who was killed in 1985 after he was abducted by drug traffickers. Camarera also briefly worked in the DEA’s field office in Fresno during the 70s.

Merced schools celebrated the occasion in a number of ways throughout the week. At Gracey, kids wore jerseys of their favorite sports teams and played outside through recess and lunch. At Reyes, middle schoolers from Tenaya read to classrooms in honor of National Book Month. And at Peterson, teachers laid on the blacktop as a BMX athlete jumped over them on his bike.

“The kids always look forward to this week. It’s a fun time,” said Peterson principal Sarah Medlin. “Of course there is an educational component and a strong message to it. The kids had a blast.”

The occasion was also a special one in light of relaxing COVID restrictions. The pandemic really put a damper on community involvement in local schools. It takes a village to raise a child, but lockdowns, remote learning and restrictions on who was allowed on campus made it harder for educators to provide that kind of nurturing environment.

“For the longest time we’ve felt a kind of sense of detachment. Yes, school is about educating children. But a big part of that is the social and emotional piece,” said Medlin. “And I also feel like kids also have to come to school feeling like they have something to look forward to. During the pandemic it was really hard to create that for them.”

“One of our big focuses is bringing that back. Parents are integral in the running of a school.”

This year is the first since the pandemic started where things are more or less back to normal. Parents can volunteer in classrooms again, and indoor assemblies have been brought back. Outdoor assemblies were brought back last year.

“This year’s really about re-establishing connections with our community partners,” said Medlin. “This is the first year where we’re back to that more of that normal feel. Of being able to come together and celebrate in groups, celebrate each other.”