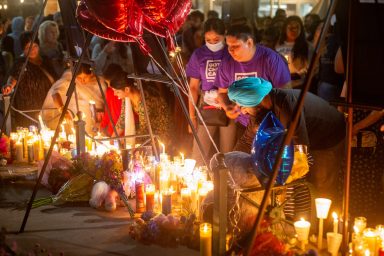 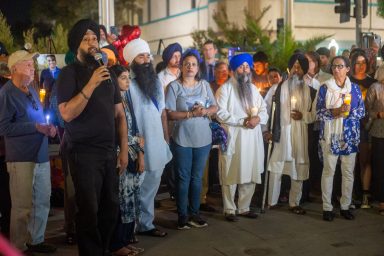 Throughout the evening community members, city leaders, and family members spoke about the tragedy. 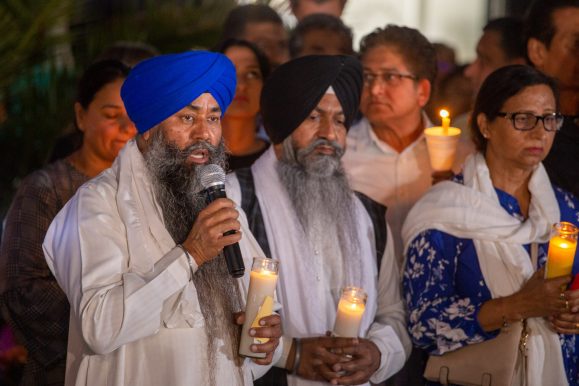 At the start of the vigil, the group was led in prayer. 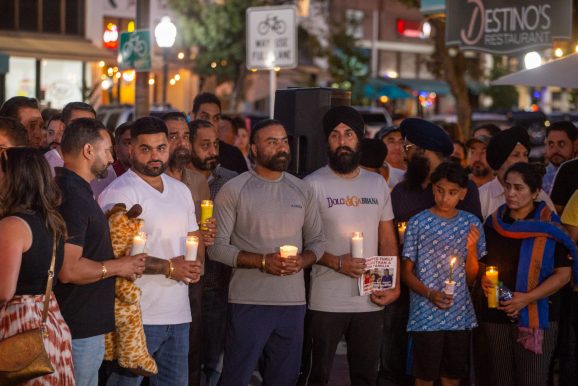 Bob Hart Square filled with residents during the first night of the candlelight vigil.

Community members seeking answers and healing are working through incredible grief to mourn and honor the lives of an entire family lost to senseless violence.

A four-night-long candlelight vigil was held at Bob Hart Square in downtown Merced over the weekend as a memorial to 8-month-old Aroohi Dheri, her mother Jasleen Kaur, her father Jasdeep Singh, and the baby’s uncle Amandeep Singh. The family members lost their lives after they were kidnapped from a business near Merced.

The killings not only shocked the community, but the entire nation, and other similar memorials have been organized in places like Sacramento and Phoenix. Hundreds attended the ones in Merced, with many leaving candles, flowers and stuffed animals around the photos of the victims.

During the first night of the four-night vigil to mourn the lives of eight-month-old Aroohi Dheri, her mother Jasleen Kaur, her father Jasdeep Singh, and the baby’s uncle Amandeep Singh, dozens of local-area political and religious leaders came to Merced to speak words of comfort and healing for a community in grief.

However, much of the attention was on the family members of those slain.

“Our family just lost four precious souls, and we’re all shattered,” said Sukhdeeep Singh Dheri. “We don’t have words to say. I just want to pray. All of you guys are here, thank you for coming.”

Other family members echoed this sentiment, saying that they were grateful

to see such a large crowd for their loved ones they described as hardworking and active within their religion.

They were also a Sikh immigrant family from Punjab, India, and part of a growing community of Punjabi Sikhs in the Central Valley.

Their bodies were found in a rural area last week, after they were kidnapped from their small trucking business just outside of Merced on Highway 59.

Merced County Sheriff’s detectives arrested suspect Jesus Manuel Salgado — a former employee of the Singhs — for allegedly abducting and killing the family. He faces four counts of murder and kidnapping. Salgado’s brother, Albert Salgado, has also been arrested. He is accused of being an accessory and destroying evidence.

Jesus Salgado was paroled in 2015 after serving 10 years following a violent kidnapping incident involving another former employer. Authorities said they had not had “any major contact” with him in the last seven years.

A GoFundMe account has been created to support the remaining Dheri family members. More than $390,000 has been collected so far.

‘Thank You’ for those who support our Field of Honor