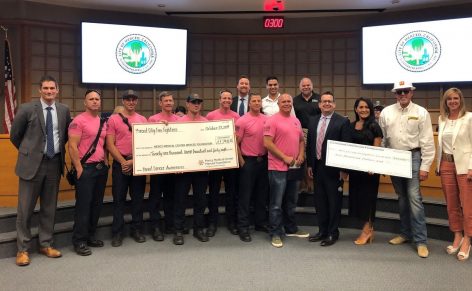 Merced City firefighters and members of IAFF Local 1479 showed up at City Hall on Monday night to present a check for $21,748 to the Mercy Medical Center Foundation. The money was a result of their fundraising efforts during Breast Cancer Awareness Month in October, including selling those popular pink T-shirts with the Fire Department logo. The money has brought the group’s total fundraising effort s to over $101,000 dollars in donations. Also that night, local housing developer Greg Hostetler showed up with a $10,000 check from the Catherine Hostetler Foundation and Stonefield Homes to support the same cause. Mercy Foundation members said the money will go to support patients through the hospital’s Cancer Center. 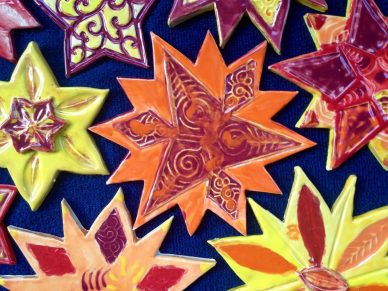 A detail of the stars, created by community volunteers, that artist Monika Modest will use on the Starry Night Community Mosaic to adorn the outdoor theater inside Applegate Park. 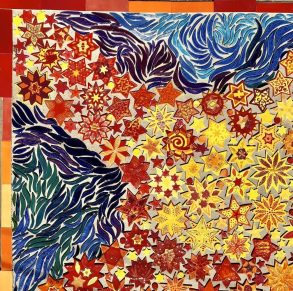 A detail of the stars, created by community volunteers, that artist Monika Modest will use on the Starry Night Community Mosaic to adorn the outdoor theater inside Applegate Park.

Mercedians start your enthusiasm because city leaders have just pulled the trigger on hosting one of the largest cycling events in the world.

The City Council on Monday night unanimously agreed to send a letter of intent to officials with the Amgen Tour of California, welcoming them to set up Stage 2 of the international race that would start and finish in town on Monday, May 11.

“This is the type of opportunity that we have been looking for to come to Merced,” said Mayor Mike Murphy. “I think it’s going to provide an opportunity for us to showcase who we are.”

The decision came after talks in recent days between Amgen officials, City Manager Steve Carrigan, and local organizers. The direct local cost to host the event is estimated to be up to $418,000 that would go for hotel rooms for athletes and staff, meals, city and county services and promotion assistance. A group of downtown hotel developers have committed $200,000 of that cost. Carrigan estimates the city government’s share of the cost would be around $100,000, and that would come from its Economic Opportunity Fund. The remaining $118,000 would come from local fundraising efforts.

The costs and maneuvering the major race around the city’s current construction boom were the top concerns in negotiations. After details were hashed out, Carrigan said he is “an enthusiastic supporter for all the right reasons … My concerns have been put to rest.”

The Tour of California takes care of the major organization efforts, and leaders and supporters of the event see a big opportunity for the city. In 2009, when Merced was the starting point for an Amgen tour stage that ended up in Clovis, some 20,000 people lined the streets to see it happen. For a completely different race that starts and finishes in town, the expectation is 30,000 or more people who will enjoy the entire day, mostly downtown.

The weeklong, 700-mile Tour of California attracts the most renowned cyclists and teams in the world. Stage 2 is expected to start in the morning at the old County Courthouse, go through town and up toward Mariposa, loop through Midpines and Bear Valley, and then back down through Hornitos, Snelling, the UC Merced campus and back to downtown.

Downtown Merced would turn into a festival of cycling and healthy living, with daylong family events and offerings. Jumbotron video displays would keep fans aware of what’s happening on the race course.

Dough Fluetsch, the race course designer and local organizer, assured city leaders that residents and visitors will be in awe of the event.

“What would give you goosebumps is the folks downtown hearing the helicopters approaching, and hearing the race return to the finish, and the cyclists come down full bore, and it’s truly an amazing site,” he said. “The race goes by, and there’s like 45 vehicles following too. The helicopters are hovering … the TV cameras are filming … the music is blaring. … It takes our downtown and suddenly it becomes this massive sports stadium that no one has ever seen here. It’s really hard to explain, but I can close my eyes and see it and hear it.”

Fluetsch also touted that Merced would receive worldwide attention through TV coverage of the start and finish. The media package includes two significant national commercials, and two short spots during coverage that the city could use to promote itself.

“We can frame our community how we want to frame it,” Fluetsch said. “We can write the narrative.”

Councilwoman Jill McLeod praised the effort, calling it and opportunity they couldn’t let slip by.

“I for one wanted the opportunity to give something to the town, and that the money was spent on something you could see, and enjoy, and take families to, and really feel good and proud about where we live.”

Names of the various host cities for the 2020 Tour of California are expected to be released in November. The start of the first stage is expected to be in San Jose.

City Council members and city staff are still fine tuning plans for a new ordinance that would extend a curfew to keep people out of public parks at night.

Currently, the curfew at most public parks is from 11 p.m. to 5 a.m., but the current city initiative is aimed at “improving safety” and assisting police efforts to fight crime.

After the council’s first public discussion on the matter, Mayor Murphy said he received concerns that an expanded curfew would affect cyclists and joggers who use the various paths that weave through city parks throughout town.

The mayor found consensus among his council colleagues, and they all directed staff to come back with a plan that includes city and county bike and pedestrian lanes. They agreed that parks should be open as early as 6 a.m. year round. There was some debate on when parks should close, and that probably would mean at different times for the summer and winter months. The council agreed to make 8 p.m. the current closing hour mark, but kept the time up for discussion at the next meeting.

Several residents stood up and offered various opinions for and against the new park hours plan, including resident Renee Davenport.

“There are so many issues that I feel were not thought through,” she said. “The people riding their bikes, joggers … Are you going to discriminate? Are you going to give this person a ticket, but not that one? … I don’t agree that this is a solution to the real problem, and that is homeless people in the park. That is what this is really orchestrated for. That isn’t going to help these people in the park. Where are they going to go? To somebody’s alleyway? To somebody’s back yard … The issues of the homeless has to be addressed — and really addressed — and that hasn’t been done.”

Merced artist Monika Modest is back at it again with a new public art project involving colorful tiles, community volunteers and a message of hope for a better Merced.

Modest is known for creating street art such as the “Poppies at Bob Hart Square,” and the “Tree of Life” pedestrian walk on both sides of the G Street Underpass.

She calls it the Starry Night Community Mosaic.

The imagery of this project as well as the mosaic itself were inspired by Vincent van Gogh’s Starry Night painting and came about as a result of an inquiry from Phil Schmauss (Merced Rescue Mission), and Joseph Homer (Golden Valley Health Centers).

Every year on Dec. 21 (winter solstice) a Homeless Remembrance Memorial takes place in Merced. At Applegate Park advocates for the homeless population, as well as many homeless people, gather to remember their fellow homeless brothers and sisters who have passed.

Van Gogh and his famous Starry Night painting seem to be fitting: the artist’s mental health battles, his personal “demons” he struggled with, the poverty and rejection he experienced for most of his life very appropriately mirror what many of the homeless are confronted with.

Modest held many public workshops to glaze ceramic stars, and several private ones were held at the local homeless shelter. More than 1,000 people have participated — the youngest being 2-years old, and the oldest age 96.

“I have been fortunate that people of all different walks of life have participated, lent their talent, and their time to this project,” she told the council. “Some 40 individuals at the homeless shelter did an amazing job.”

The MOAT site at Applegate Park was also selected to support the adjacent neighborhoods’ efforts to return this park to the public to be enjoyed by all as a safe and attractive space, according to Modest. Some of the neighbors have voiced their concerns and fears that the installation of Starry Night will attract an increased number of homeless people. To address these concerns Modest held a neighborhood meeting last Wednesday to better inform people about the project, its purpose and to give them an idea of what it will look like.

Nevertheless, a few people spoke up against the project at the City Council meeting, saying the park was not the appropriate site for such a “memorial.” However, a few more people spoke up in support of Modest, saying beautification was the way to go.

One of the more convincing arguments to improve the outdoor theater came from Heike Hambley, the director of the Merced Shakespeare Fest. Her performance troupe has been hosting free classic plays at the MOAT during summer months for nearly two decades.

Said Hambley, “Every year it has become more and more frustrating to put on Shakespeare at the MOAT. The building that once people were proud of is really deteriorating.”

She said the structure is suffering from bad lighting, a storage room in need of significant repairs, and inadequate dressing and restroom facilities. Hambley announced that Shakespeare in the Park may not happen at Applegate for next year’s 19th season.

“We are looking for other options,” she said.

As for Modest, she insisted there was hope.

“For me, it’s only the begging of the transformation of the MOAT. There is funding necessary to bring back the structure. I can provide the funding. … If we want to tackle the homeless issues, we cannot do that by removing them from a public place. The way to take back our park is to use the park.”