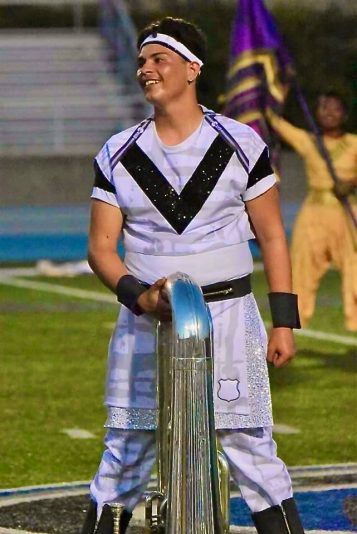 Landen Brown performing with the Vanguard Cadets at Lucas Oil Stadium in the DCI World Championship on Aug. 9.

Landen Brown had three days to make a decision. Travel across the country with one of the most prestigious marching bands in America and miss the first few days of school, or enjoy the remaining time of his summer break.

It turned out to be an easy choice. Before he knew it, the 16-year-old senior at Merced High was off with the Santa Clara Vanguard Cadets on a four-week tour of the United States, culminating in the Drum Corps International World Championships in Indianapolis, Indiana.

“The major leagues for drum corps” is how Landen describes it.

The lifestyle of a traveling marching band isn’t for the faint-hearted. Nevada, Wyoming, Nebraska, Iowa. They zipped through time zones, traveled from the high desert to the Great Plains in the span of a few days, sleeping in gyms and surviving off of catered hot dogs. And then there was rehearsal. Constant rehearsal, for hours each day.

“Basically you sleep on gym floors with either a really thin pad or a small air mattress and a lot of clothes that you pack,” he said. “And then we had community showers, which is an interesting thing to get used to.”

Their journey ended at Lucas Oil Stadium, home field of the Indianapolis Colts. 22,000 people filled the stands. Dozens of bands from all over America faced off. Using a top-of-the-line tuba provided by Yamaha just for the tour, Landen competed in the DCI Open Class World Championship. The Vanguard Cadets swept every scoring category, from visuals and color guard to percussion and brass.

His family wasn’t able to attend, due to the grueling travel schedule and having to work, but they followed his every move from the sidelines.

“We could watch it live through an app called FloMarching. But of course there’s a three hour time difference,” said Leah. “I was at work, it was during my lunch hour. And so I was like, oh my gosh, I get to watch some of it.”

The performances were also broadcast in at least one local theater, according to Leah. It was called “Big, Loud, Live.”

The speed with which Landen went from local teenager to championship tuba player was a shock. In mid July, Landen applied for the Vanguard Cadets after seeing an opening for a tuba player.

“I already had the thought of doing it, but then they had a spot come open for tuba,” he said. “So I just emailed them and told them that I want to do it. And they said yes.”

Three weeks later he had won a gold medal.

“We were just shocked when it all came about, because you know, kids have to try out for months ahead of time to get there,” Leah said. “I mean, he went from a normal summer in Merced to traveling across the country.”

Landen started his musical career in 5th grade, playing the trumpet for Peterson Elementary and Cruikshank Middle School. He later branched out to tuba and drums as well as acoustic, electric and bass guitar. He has played in the Merced High Marching 100 all four years of high school.

Unsurprisingly, his time with the Vanguard Cadets is an experience he plans on repeating.

“They just have a really strong program that has always been well known for their achievement,” he said. “The goal would be to go back and do it again.”