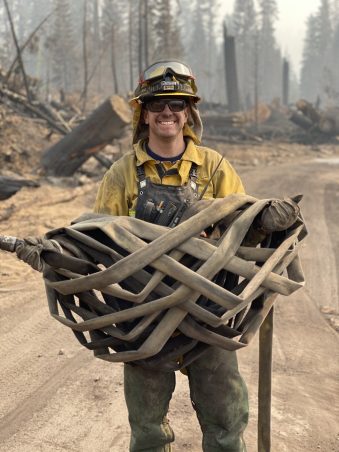 Merced firefighter Grant Parker at work in the wilderness far from home. 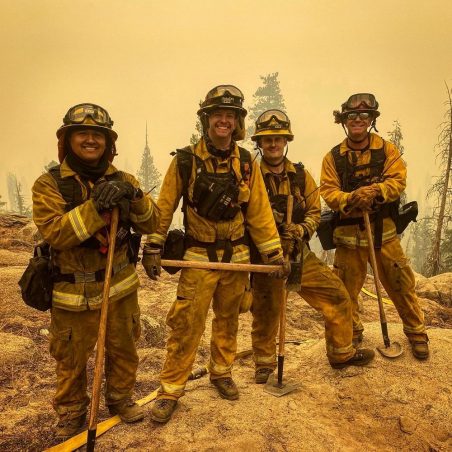 Smiles amidst the devastation: The OES 393 crew of Greg Ybarra, Grant Parker, Kelley Figley, and Jeff Cole. While local fire crews helped save mountain homes, there was no escaping the smoke and destruction left after the flames rolled through acre after acre. 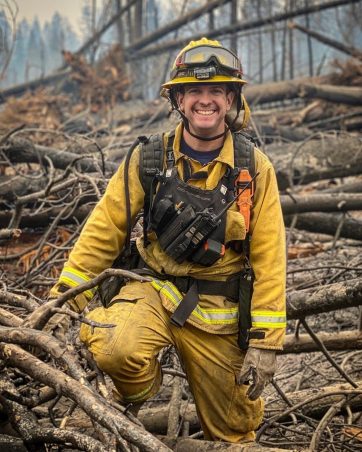 Merced firefighter Grant Parker at work in the wilderness far from home.

Nearly a month ago, Merced Fire Engineer Grant Parker and a few fellow firefighters were navigating a narrow mountain road in near pitch-black conditions, with fire flaring up at them from all sides.

They got through that inferno unharmed with only some singed equipment, but Parker admits that 30-second experience was unsettling.

Parker returned to Merced on Sunday after being deployed on three California wildfires since Aug. 18 but takes the harrowing drama of the ferocious and still-raging Creek Fire blazing east of Fresno in stride — it’s part of the job he signed on for 17 1/2 years ago.

“It was pretty dark and smoky. We drove through there pretty quick and came out the other side maybe 30 seconds later. It’s part of our job, right? We took a little damage. It was an eery feeling driving through with all of the flames,” Parker says.

As of Tuesday, 283,724 acres of forestland in the Creek Fire have been scorched and the blaze was only 30 percent contained, Parker reported from information gleaned on the command center smart phone line that he consulted during his 15 days there. The cause of the fire is still under investigation.

All the days kind of blend together but Parker believes the first 80 hours were the worse. He worked 80 hours straight before relief was possible and then worked 24 hours on and 24 hours off, staying in a base camp in Auberry.

Parker says the fire ran up a hill in two directions in the Big Creek area and they had no choice but to hurriedly evacuate, stopping in midpoint of efforts to keep the fire from consuming mountain homes.

When they got through that narrow passageway, they discovered a litter basket used to evacuate fire victims and some other equipment on their rig had melted in the heat. Black tar from power lines and the roofs of imperiled homes also landed on the firetruck.

As the engineer and driver on the Merced Fire Department rig, Parker shared the front seat with the fire captain; two other firefighters shared the rear seats. While he was driving Parker filmed video that ultimately was shared with Fresno television news channels.

On Sept. 5 the fire below Sierra Camp jumped over the creek and made a run to the north near Mammoth Pools, getting progressively more aggressive. When it ran up the hill, Parker and his comrades had to get out very quickly.

“We were unsure what the conditions were going to do. We noticed a burning car in the road and went around it. Why film our exit? A lot of people don’t understand what we do as firefighters. It’s a great opportunity to pass onto them, to see what we go through,” Parker says.

He was deployed to three places during his fire stint. The first was about four days on the Jones Incident near Nevada City, then about 14 days at the CZU Lightning Complex fire near Santa Cruz and then 16 days on the Creek Fire.

While he doesn’t have any estimate on the number of homes they were able to save from the flames, Parker says numerous times they would extinguish spot fires on a roof, the porch or planters in mountain homes, which were started with flaming branches and leaves fanned by excessive wind at times.

The strike team Parker was part of was assigned to structure protection. It included units from Fresno city and county, Los Banos, Merced County, Merced city and Clovis. Parker said his team was able to save a number of homes from fire.

Since Parker joined the Merced City Fire Department more than 17 years ago, he has regularly been part of the deployment to out-of-area blazes, usually going once or twice a year. These fires have taken him as far north as Oroville and as far south as Riverside — with lots of places in between.

Any takeaways from this experience? Parker says people should take evacuation orders more seriously. In some cases firefighters had to rescue people who wouldn’t leave when they were first told to go. People should just be prepared  and not take anything for granted.

Parker says firefighters don’t think of the risk involved with their jobs, trying to do the best job possible and walk the gray line between being safe and the risks involved.

Many times the firefighters’ efforts meant minimal damage to homes rather than total destruction. Parker says the public is always very thankful and it’s good to see that display of gratitude.

Why choose a life in fire service? Most all firefighters truly have a heart to help people when they need help, Parker says.