A veterinary station allowed kids an opportunity to learn about bones and animal structure during a pilot exhibit for the Kids Discovery Station. 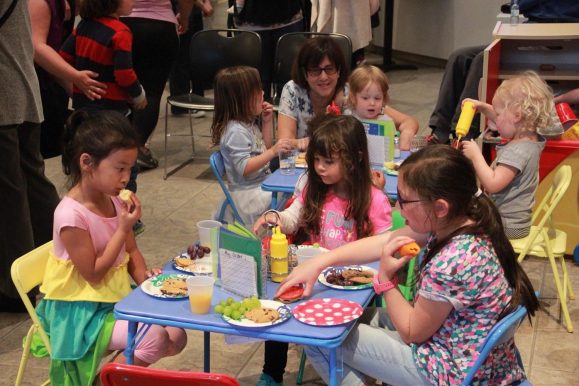 Kids enjoy a cafe exhibit as an example of an interactive learning experience at the Kids Discovery Station.

The first-ever children’s museum in Merced County is set to open this coming spring, giving all wonderers and little explorers an opportunity to learn through play and discovery.

The project was spearheaded by Mayya Tokman, UC Merced professor of Applied Mathematics and director of the CalTeach program at the UC, her husband Angelo Kyrilov, professor of Computer Science at UC Merced, and Merced County Supervisor Lee Lor.

The mission of the proposed museum, The Kids Discovery Station (KiDS), is to allow a space to release and use their creativity and imagination, all while introducing them to different environments, experiences, and information.

“I have a 7-year-old who was born and raised here,” Tokman said of the driving force behind the idea of creating a children’s museum. “I didn’t know about children’s museums until I had a child. It’s 120 degrees outside in the summer, no one wants to go and play outside on a hot playground. Merced does offer options for family fun, but nothing like a children’s museum would. The museum will create a place where kids can learn while having fun with the family.”

Token explained that the museum is much needed in our community. The closest museum to Merced County is the Fresno Discovery Center which is already over 60 miles away from Merced. A local kids museum would allow a nearer opportunity for families to engage in learning together. The museum has been in the planning stages for a little over a year and is being projected forward with the support of the community.

Planning for the educational center began in early 2018. Project coordinators slowly began introducing the public to the goals of the museum with KiDS exhibit pop-ups, aimed to introduce participants to new ideas, opportunities, and environments through learn-play, interactive exhibits, and educational activities.

Merced’s Multicultural Arts Center hosted the first pilot exhibit through UC Merced’s CalTeach program. The program ran for two weeks, giving participants a chance to interact with a mock kitchen setup, train station, and veterinary clinic that made up the exhibit.

A kitchen stocked with plastic food and lunch tables, a microwave, and oven, surrounded the café area that aimed to teach children about nutrition and the process food goes through from kitchen to plate. The vet exhibit featured X-rays; introducing participants to bone structures and how they differ from animal to animal. A projected 910 visitors engaged in the MAC exhibit that ran from May 26 through June 8, 2018.

The Merced County Library hosted the following exhibit with funding from CalTeach and a grant from First 5 Merced County. Continuing the theme of learning through play and interaction, exhibitions at the library included a green screen, virtual reality, and a sand pendulum along with other attractions. The exhibition ran from Aug 1 through the 21, 2018 and attracted an estimated 1,700 visitors.

The last KiDS exhibition was held at the Merced County Fair just this year at the STEM pavilion. An estimated 3,400 visitors interacted with the exhibit that ran from June 5 through the 9.

With more than 6,000 visitors to the pop-up exhibits, Tokman envisions that the future museum will continually bring out families for continued fun and entertainment in Merced County.

“We are two-thirds into our fundraising goal,” Tokman explained. “We have quite a few sponsors already and are inviting founding partners to join with an opportunity to be on our founding plaque that will be in the museum forever.”

First 5 Merced County has already donated $100,000 to create the Little Explorers Planet, an exhibit focused on children aged 0-5. Golden Valley Health Clinics is sponsoring a health center exhibit in the museum that will include a mock doctor’s office. Other sponsors include Merced Lions Club and the CoreHR team.

Tokman mentioned that the People’s Budget, a participatory budgeting process led by Supervisor Lor, allowed residents the opportunity to decide where a certain amount of public funds would be spent. She said a $10,000 grant was approved that will allow community members free entry to the museum on a Saturday, once a month, for 10 months.

“All our founding partners and organizations who have worked with us have been wonderful,” Tokman concluded. “We are still looking for more sponsors and hope to meet our goal in time to open next Spring.”

For more information on the Kids Discovery Station, you can visit their website at: kidsdiscoverystation.org.