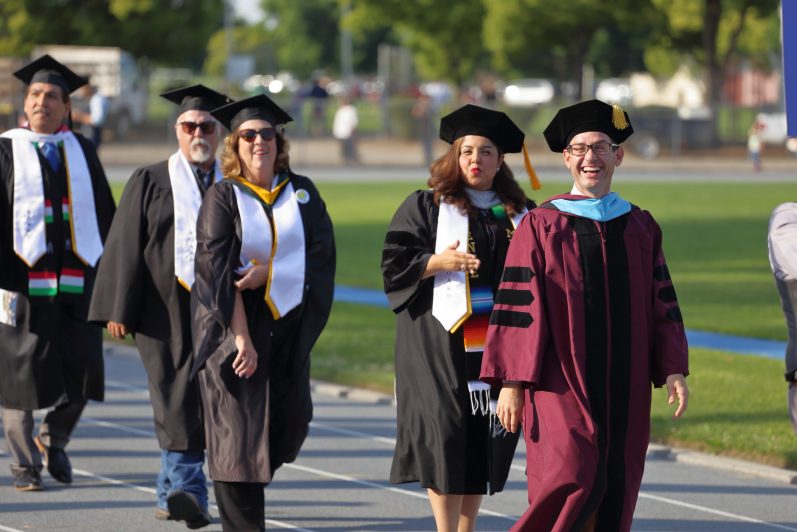 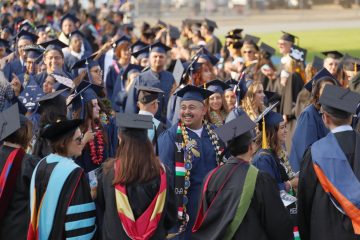 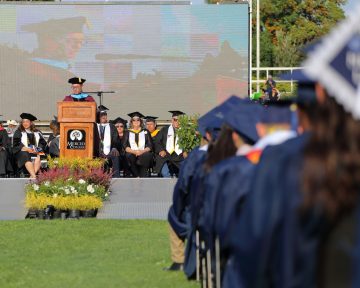 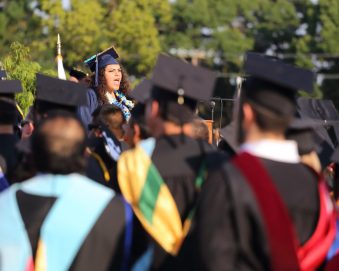 Merced College students open the ceremony with the singing of the National Anthem. 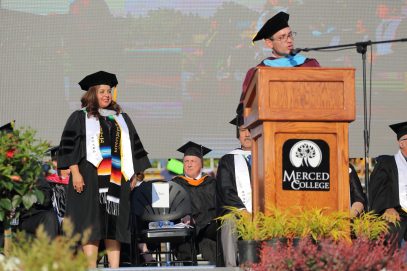 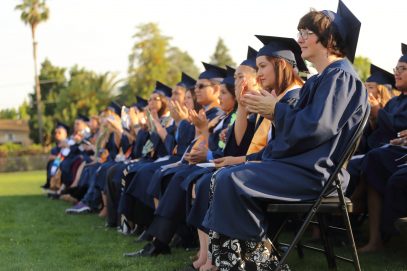 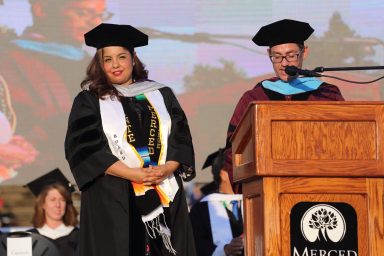 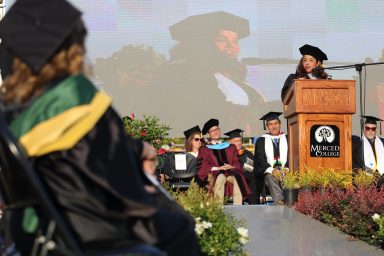 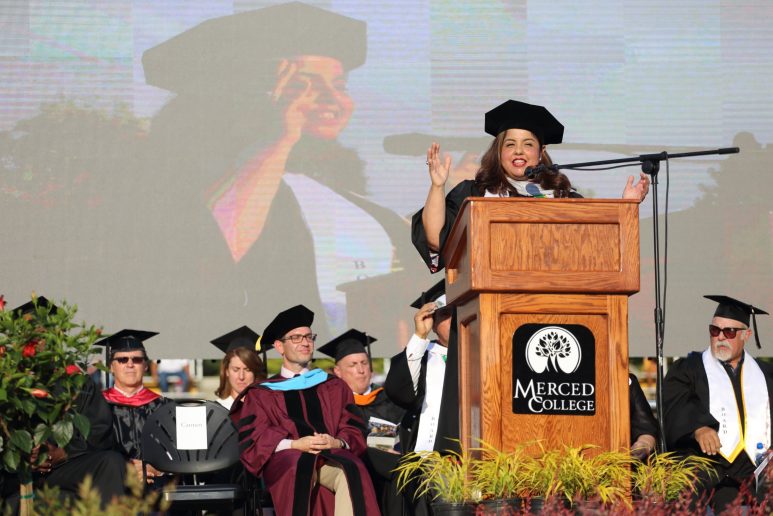 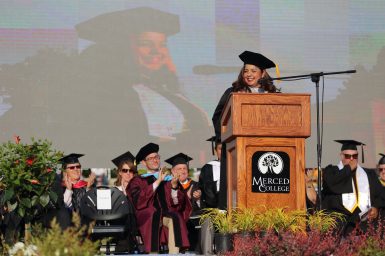 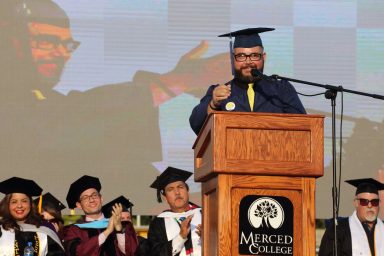 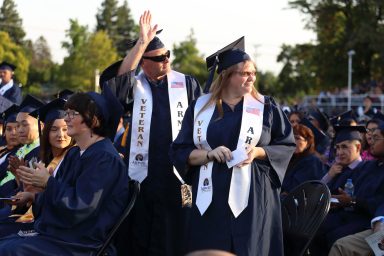 Veteran graduates stand to be recognized for their service to the country. 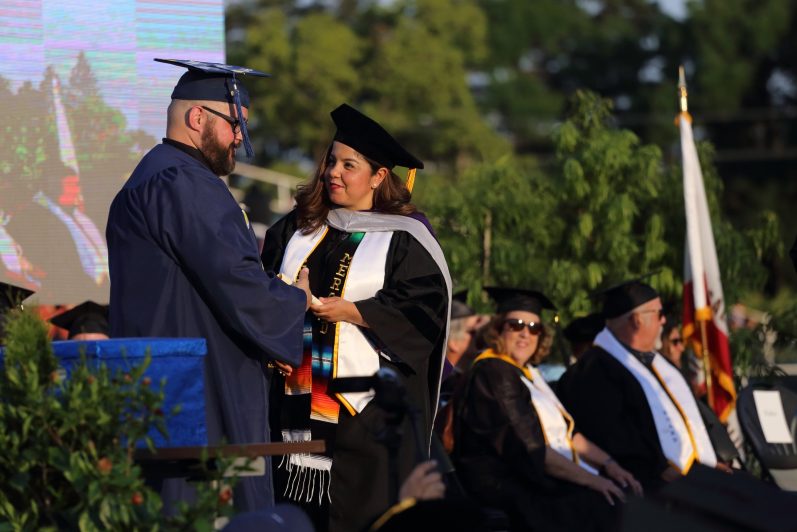 Board of Trustees President Carmen Ramirez hands off a diploma to Matt Escobar Sr. 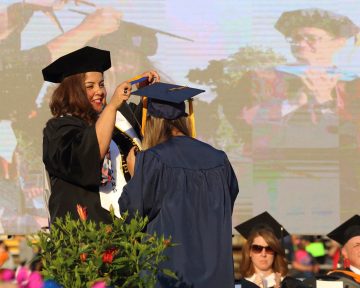 Board of Trustees President Carmen Ramirez puts a medal around one of dozens of honor students. 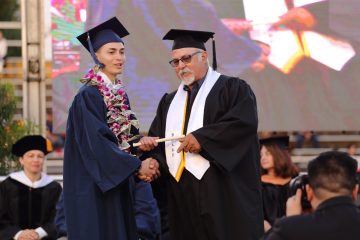 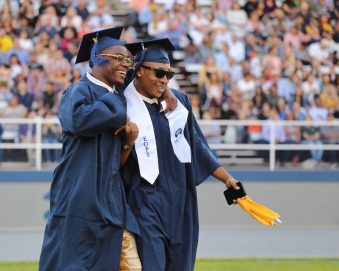 Two graduates make their way to the stage to receive their diplomas as their friends and families look on. 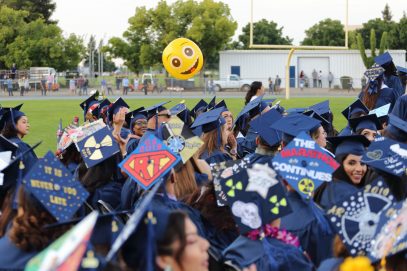 Graduates in the Class of 2019 keep themselves entertained as their classmates make their way across the stage Friday evening. 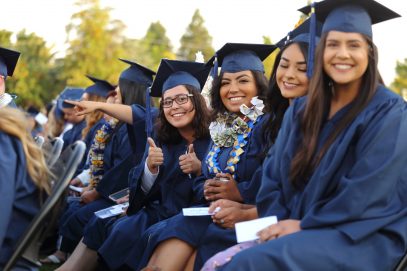 Alyssa Mendoza, at back, smiles from ear to ear alongside of her fellow graduates

Graduates make use of a bubble wand after receiving their diplomas and waiting for their fellow graduates to make their way across the stage. 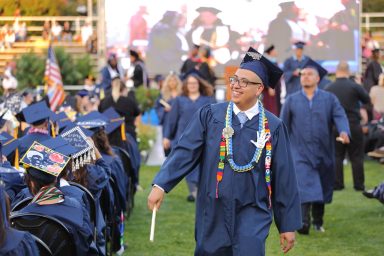 Friday’s Class of 2019 was Merced College’s largest class ever, overtaking last year’s class by just under twice as much. 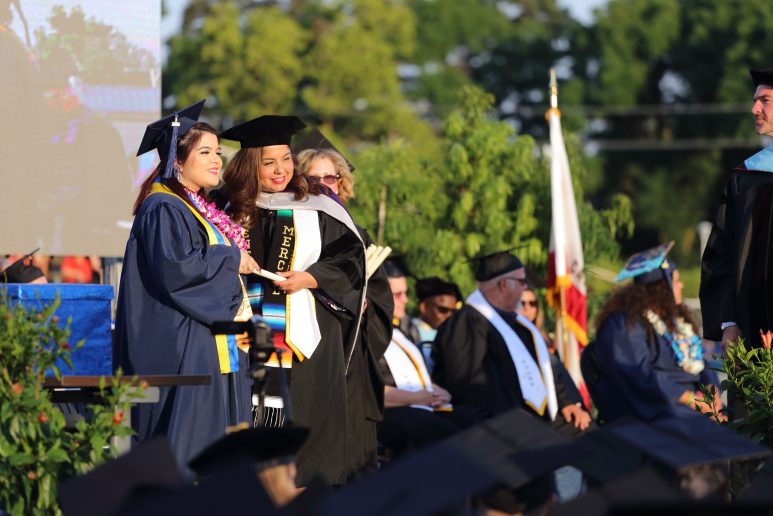 Merced College Board of Trustees President and ceremony keynote speaker Carmen Ramirez hands off a diploma to one of the 3,294 members of the Class of 2019. 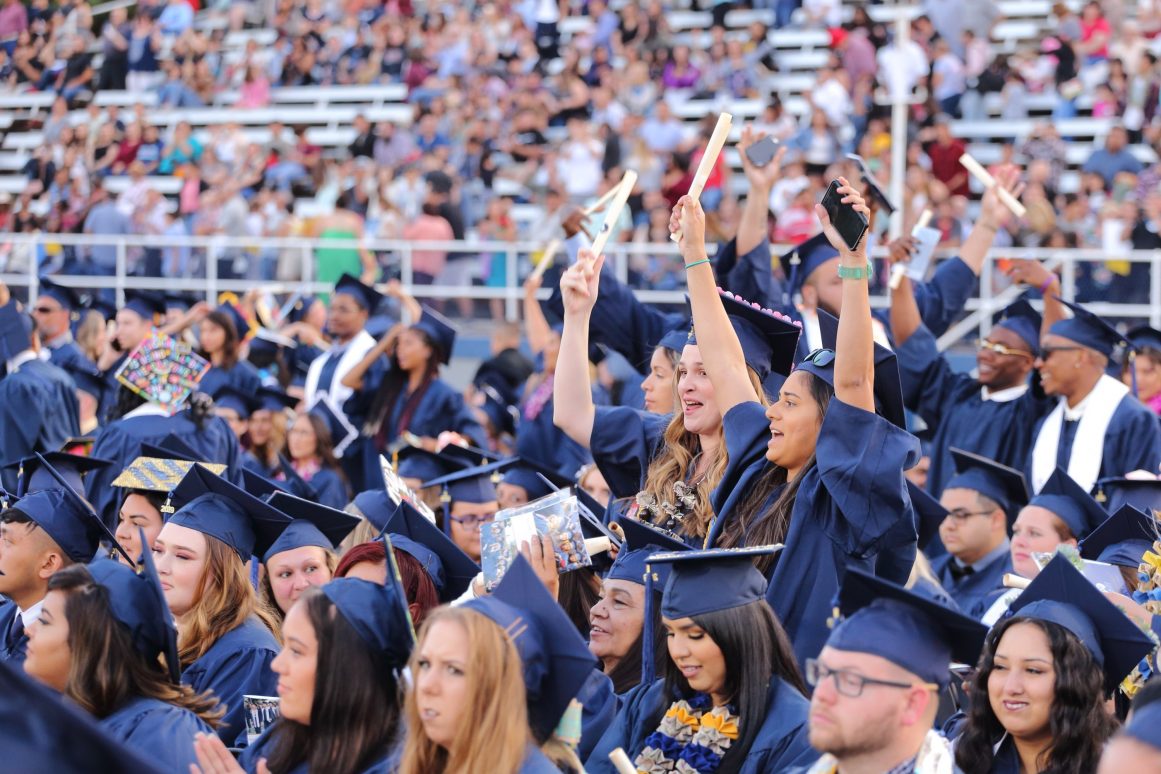 Members of the Class of 2019 cheer and celebrate as the Merced College Commencement Ceremony comes to a close Friday night.

The stands of Don Odishoo Stadium were packed with friends, family, and loved ones as Merced College held its 56th Commencement Exercises last Friday night.

Board of Trustees President Carmen Ramirez served as keynote speaker for the event, and delivered a touching speech about her family connection to Merced College, as well as her personal trials and tribulations as she pursued higher education and a career.

Leaving Merced College and transferring to UCLA, Ramirez spoke about the countless hours she devoted to her initial career paths before switching the career she was pursuing.

“After graduation, a lawyer who worked on the same floor as me said: ‘I see lawyer in you,” and I didn’t see it at first because I didn’t feel it was a career choice open to me,” she recalled.

Ramirez explained that when she made the decision to continue in a new direction, she did so wholeheartedly and learned that “closed doors are just as important as open ones.”

While noting that she is no longer the same person who graduated from Merced College, she encouraged the Class of 2019 to aim high and pursue larger aspirations.

Said Ramirez, “The reason the windshield in your car is bigger than the rear view mirror is because what is in front of you is much more important than what is behind you. So stay strong, put up a good fight, be proud, be humble, and always push forward.”

Student Speaker Matt Escobar Sr. detailed his own pursuit of higher education that started out in Brooklyn. He failed a semester at a community college and ultimately convinced himself that college wasn’t for him. After growing a family, he still felt something was missing and made the decision to once again attend college after 20 years. As he pursued his degree, tragedy struck as Escobar’s daughter was killed in a car accident.

“As you can imagine our entire world came to a screeching halt and the earth was crumbled from beneath us,” Escobar said.

He said he began to question if he should withdraw from college, as he was finding it difficult to continue to concentrate on his courses.

Ultimately, he made a decision “to not only fulfill my promises to my children, but to honor Riley.” Escobar continued his courses, in the memory of his daughter who had spent countless hours bringing him up to speed on subjects he was working on. With the help of his family, Escobar also started a memorial that ended up making an impact all around the globe known as the “Smiley Riley Rock.”

“Yellow smiley heart rocks have been painted and placed around the world in her honor to encourage others to spread kindness and acceptance as she did,” he told his fellow students.

Escobar ended his speech by saying: “I’m hear to tell you if this brokenhearted father who started in an impoverished neighborhood in Brooklyn, New York can do it, so can you.”