Merced College academic support has new home under one roof 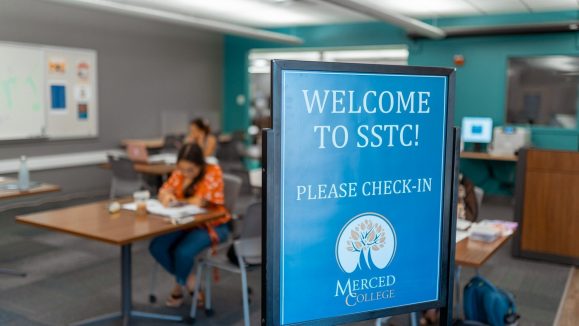 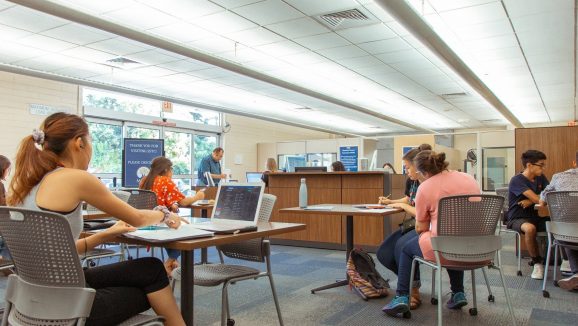 The academic support operations — formerly known as the Tutorial Center, the Math Lab and the Interdisciplinary Learning Center — all live under one roof called the Student Success & Tutorial Center.

The Merced College freshman slumped down in front of peer tutor Alex Gonzales and complained, “I’m bad at English.”

Gonzales replied, “Let’s take it slow and see what happens.”

For 10 minutes, Gonzales watched her squirm as he explained how to attack an English course. Finally he asked if she was OK. Turns out she wasn’t bothered. She was relieved knowing Gonzales could help.

She told him, “It’s one less thing to stress about.”

That has long been the goal at Merced College: Connect students to services to move the academic ball forward. A year ago, that student found her answer in a peer tutor. She still had to go to one of three locations to do it.

Today, the academic support operations—formerly known as the Tutorial Center, the Math Lab and the Interdisciplinary Learning Center—all live under one roof called the Student Success & Tutorial Center (SSTC).

Merced College has long known that consolidating tutoring services into a “one-stop shop” would ease that strain.

“Now we say, ‘If you need help, go to the (SSTC),’” said Michael McCandless, vice president for Student Service. “It’s so much more effective.”

Also, Merced College has always had a large number of first-generation students. Few have a family member familiar with going to college to provide practical support.

“To so many of them, every door is a barrier … Our students would get overwhelmed and frustrated. It wasn’t the right model,” McCandless said. The right idea simmered for 15 years before picking up steam in 2016. The college received the Basic Skills Student Outcomes Transformation (BSSOT) grant to enhance reading comprehension that year. MC students quickly took to it.

The BSSOT grant ended in June, but California community colleges have also been sorting out Assembly Bill 705 from 2017. Students no longer take placement tests for English and math, but do have to pass transfer-level courses in both within one year.

The SSTC replaces Merced College’s old Communications Building where the peer and faculty tutors were already working. Removing a wall in between the groups freed up space for math tutors.

The SSTC also has an embedded counselor available to meet with students when they first arrive. Students can get help with their schedules and majors. If they need WiFi, computers, printers or charging stations, they can find them in the SSTC. If they need a cup of coffee, well, there are plans to add a student café.

Having everyone in the same spot saves resources and encourages collaboration.

“Students might have gone there for math and noticed their English instructor,” McCandless explained. “They feel free to ask an English question. They know where to go. It’s not a maze. It’s easy to point them in the right direction.”

The center will have its grand opening on Sept. 9, but is off to a promising start. The SSTC served 640 different students, on a campus of roughly 10,000, in its first week. If those numbers hold, it will serve 25 percent of the student body in its first month.

As outreach and word-of-mouth improve, the SSTC should continue to exploit its centralized location. But how will Merced College pay for the growth?

The resources to sustain the SSTC are there. Still, when will it need more space?