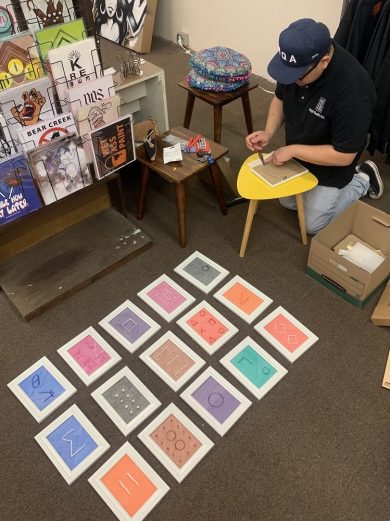 Stephen Schertz, of High Quality Arts, gets his frames ready for hanging at Kreepy Kawaii designs. 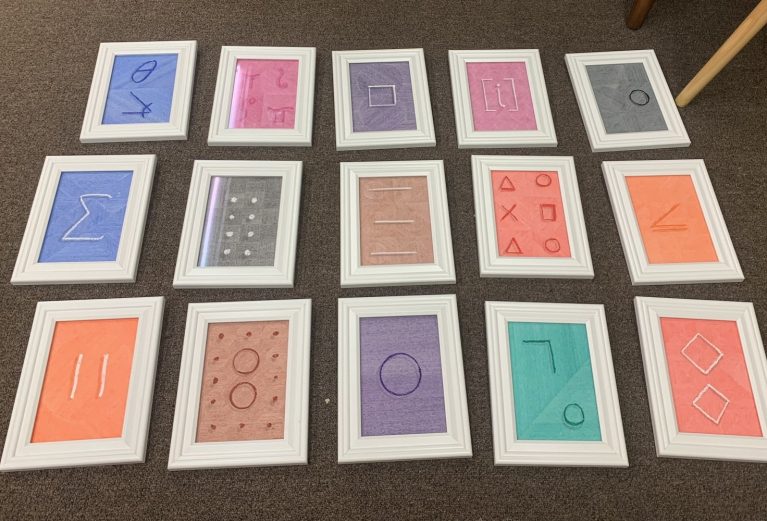 NFD, the name of Schertz’ art series, pays homage to the modern “NFT” digital marketplace, and is inspired by mathematics.

The latest artist to be showcased at Kreepy Kawaii Designs in downtown Merced is no other than Stephen Schertz of High Quality Arts.

A reception will be held at the gallery this Friday, Aug. 20, from 6 p.m. to 9 p.m. The address is: 1731 Canal St. There will be a special story time reading by Jade Chatman, and vending by Irma Ceja. Residents are invited to come out in a fun celebration for the whole family.

Shertz currently has his work showcased at The Tioga, and is the artist behind the colorful utility box on the corner of M and 16th St.

Born and raised in Merced, Schertz graduated from Merced High in 2012, and since then has been ambitiously sharing his artwork and collaborating with artists on his website: HighQualityArts.com.

“In 2015, I said hello to High Quality Arts,” he explains. “It’s still in heavy development in the sense that it’s an online gallery that will be the next MoMA, the little brother to the biggest museum in the world …”

He says he developed the website after one of his exhibit ideas was rejected by the Merced’s Multicultural Arts Center. It was then that he became inspired to create a space where others could share their arts with no fear of rejection. He hopes to one day have a physical spot for his gallery, but until then, the digital space he’s created will be the guiding force to what High Quality Arts will be one day.

Big dreamer that he is, Schertz believes anything is within his reach, with enough ambition and by breaking a few rules here and there. Just this year, he has juggled applying himself to his studies at school, managed his website, and in July became part of the Gemini Navy team in the NASA Aerospace Scholars Program through Merced College.

His latest collection is a great reflection of where this past year has taken him, and a preview of what is to come. The pieces in his installment are inspired by mathematics, experimentation, and the great love he has for linework.

His sixteen piece series, “NFD,” or or “Non-Fungible Drawings,” pays homage to the modern “NFT,” or “Non-Fungible Token” digital marketplace. Schertz began working on the collection in April and finished his last piece just this week.

Exactly 18,688 lines are presented throughout his entire “NFD” multicolored series.

Lines have followed Schertz through his artwork since high school. He still remembers his art teacher giving the class a linework assignment. The students were supposed to create figures and outlines with their lines, but instead of following the guidelines as the teacher instructed, Schertz took the instructions literally.

“I didn’t know what he meant and I was too afraid to ask him,” he laughed. “I took it literally and started drawing lines. I sat there drawing through all my classes, I just kept drawing. And when I handed it to him, he told me it wasn’t what he expected — not in a negative way, but in a blown away way. That was the first time I ever saw anyone’s eyes light up while looking at my work.”

Come meet the artist and discover more of Schertz magical lines this Friday afternoon at Kreepy Kawaii Designs from 6 p.m. to 9 p.m. For more information on the event, please reach out to Patricia Pratt at 209-354-6067.