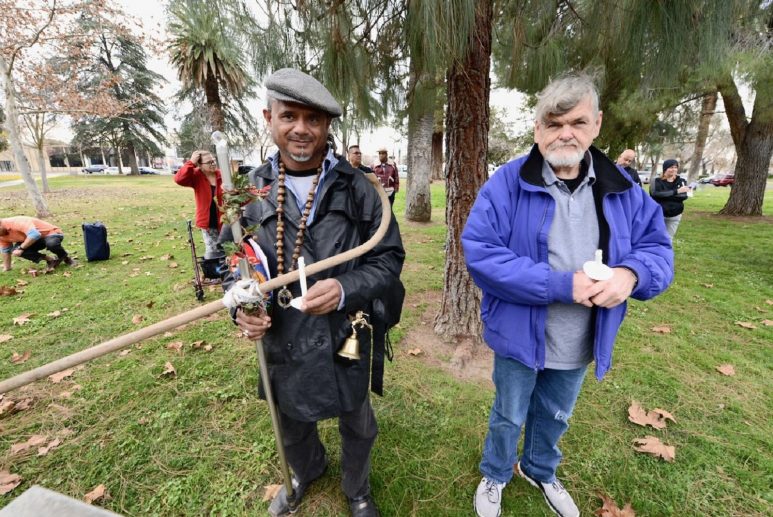 Two men stand together during the Merced Homeless Memorial. 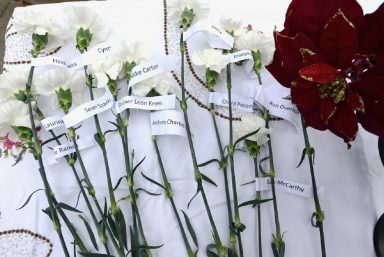 White carnations with the names of those homeless people who died in 2019. 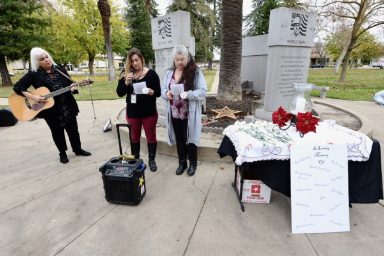 Tiffany Fagan and Nila Hampton read the names of homeless people who died on the streets of Merced County as Annette Macias plays a song of reflection. 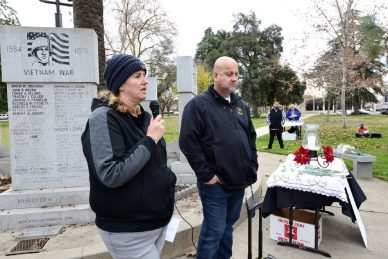 Jennifer Jones and David Carr give testimony about their father who died alone as a homeless man in Merced. 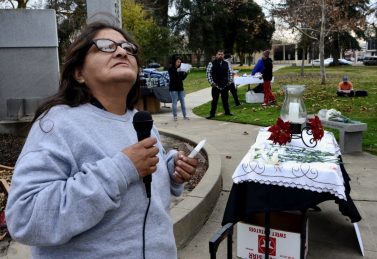 Manuela Woods looks up to the sky as she talks about her brother Anthony Charles Guzman who died while living homeless. 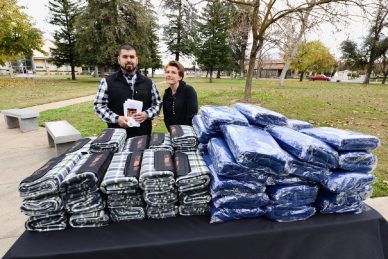 Rescue Mission volunteers gave out free blankets to all those in need.

About 30 to 40 people showed up to remember the homeless and those who have died during the ceremony at Courthouse Park in Merced.

Every year on Dec. 21 — the first day of winter and the longest night of the year — family members, advocates, community leaders, service providers and friends gather to remember local residents who have died trying to survive homeless on the streets of Merced County, or in shelters from conditions directly related to their homelessness.

The event is called the Homeless Persons’ Memorial Day, and this year the names of 13 individuals were called out, among others who have died in years past.

Last year, 23 names were called out. In many cases, the Memorial Day service is the only commemoration of the lives of those who died while living homeless.

“The list this year from 2019 is much shorter than it was last year, and that to me shows that our efforts are not in vain, that all the hard work from the affiliates and various organizations, working together, are helping to change lives, and save the lives of people who have otherwise been forgotten,” said Renee Fausette, a service coordinator for the Hope Respite program by the Merced County Rescue Mission.

The program partners with Mercy Hospital to house sick homeless individuals — giving them a chance to rest, establish a primary care physician, practice taking medications regularly and learn about their illnesses.

Several people spoke at the event, including Jennifer Jones and David Carr, the children of Danny Carr, who died while living homeless a couple years ago.

In a heart-wrenching testimony, they talked about how their father chose a life of homelessness and heroin addiction on the streets. He had diabetes and lost both his legs. He refused help from loved ones, and missed out on the births of children, birthdays, weddings, holiday gatherings, and even simple, daily phone calls. However, they also said their father cared about his fellow homeless friends and made efforts to protect them, showing that the homeless community does indeed care for their own.

Activist Gloria Sandoval of the Central Valley Journey For Justice spoke about efforts to implement the Homeless Bill of Rights. The rights stated include:

The average age of death of a person experiencing homelessness is about 50 years — the age at which Americans commonly died in 1900.

People experiencing homelessness suffer the same illnesses experienced by people with homes, but at rates three to six times higher.

People experiencing homelessness die on the streets from exposure to the cold.