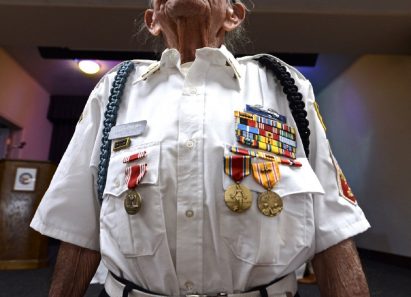 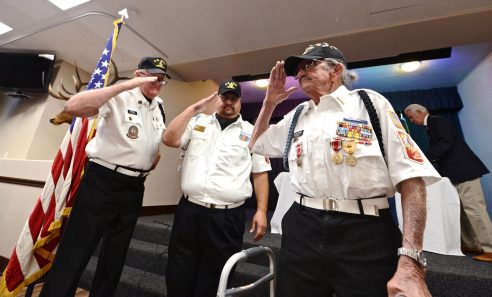 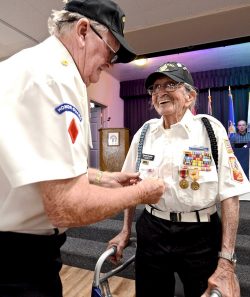 Paredes smiles after one of several WWII medals were pinned to his uniform. 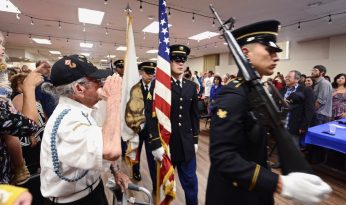 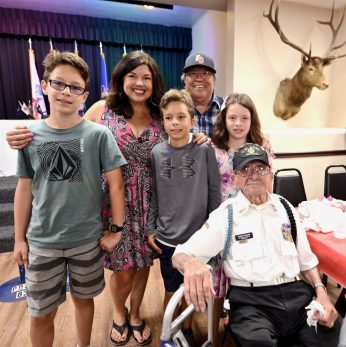 WWII veteran Frank Paredes with his son Frank, daughter-in-law Anna, and grandchildren who traveled from Grover Beach to Merced for the event. 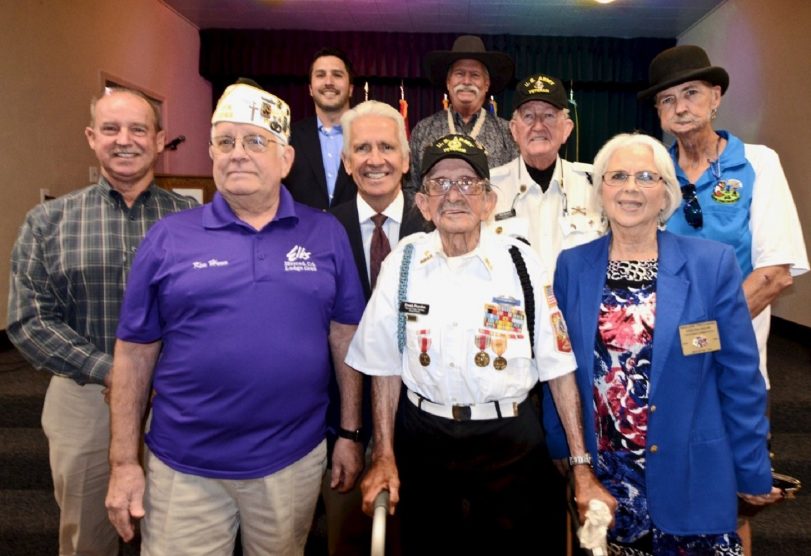 A crowd burst into cheers and applause as Frank Paredes entered the banquet hall of the Merced Elks Club on Sunday afternoon.

The 99-year-old World War II veteran and Pearl Harbor survivor used a walker as he made his way slowly to the front of the room, amid hugs and kisses. The look on his face was one of awe, wonder and tearful happiness.

Family members, friends and fellow veterans gathered for the surprise ceremony to honor Paredes and present him with a series of medals he earned in wartime overseas but never received during in his long life back in America.

The Atwater resident served in the Unites States Army from 1941 to 1945.

On Sunday, Dec. 7, 1941, just before 8 a.m., while many people were waking up in Hawaii, Paredes was going to Mass when he heard the words “This is not a drill, this is not a drill” through a loud speaker. He immediately manned the first anti-aircraft gun he could find and started shooting at Japanese fighters and bombers in the skies above.

It was the start of the attack on Pearl Harbor that would lead to America’s entrance into World War II. Paredes would survive and eventually fight in several other battles in the Pacific, including the Battle of the Coral Sea, the Battle of Buna-Gona and the Battle of Tarawa Japan.

When the war was over, Paredes was supposed to receive several medals. They never came. In the 1970s, a fire at the National Archives burned many records. According to family members, he tried for many years searching for something to confirm his war efforts to get those medals, but nothing ever came of it.

Later in life, his daughter Veda took over the search, and this last March she and friends of Paredes contacted the office of Congressman Jim Costa to enlist his help. For months, Costa’s staff worked with the U.S. military and the National Archives in securing several medals that were presented to Paredes last Sunday.

Said Costa: “The passion and the pride that he has exhibited his entire life for our country, and the role model that he is for all of us — as he has been for his family — is truly worth commemorating, reflecting and celebrating upon.”

The congressman turned to Paredes and said: “Frank, you’ve made a difference.”

After the Army, Paredes served in the National Guard. He served this country for a total of 28 years. He is an active member of the Merced Elks Lodge #1240, a lifetime member of the VFW, and a member of the Honor Guard.

He was also married nearly 50 years before his wife died in 2007. He has 6 children and dozens of grandkids, greats and great greats — many of whom traveled to Merced for the big event.