Longtime family restaurant in downtown Merced struggles to survive while owners ask ‘Why?’

‘You see all these huge corporations who are making more money,

but we are the ones who are the most impacted.’

At 62, Alejandro Trevino appears to be a shy, gentle and caring restaurant owner with a warm smile and a strong Spanish accent from his native Mexico.

These days, the younger Trevino is a bit more on edge and eager to speak out.

“We have been in this beautiful, historic building on the corner of Main Street and K since 1999,” Trevino Jr. says. “It’s a family-owned business and we specialize in creating a family environment. A lot of work goes into that. A family business is not the easiest business to run. But we are here for the community, and I think they love it. All of our food is homemade — including the flour and corn tortillas, and we prepare the beans as well. … We must be doing something right if we have been here for 20 years.”

His father interjects: “Actually we have been in business for more than 30 years. I came to this country with one of my brothers in 1976. We started out working in the fields, and then I worked for an aluminum company, and then Malibu Boats. Later I decided to start my own business with a catering truck. Then we moved to a location on 16th and R, and then to Main Street.”

Downtown wasn’t exactly bustling as the new millennium approached, but things would soon change for Trevino’s restaurant. In April of 2001, a modern cinema complex opened up across the street, and that brought in a whole new wave of people, and potential customers, night after night, especially on the weekends.

The restaurant grew in popularity, business was steady and good, and the entire staff ballooned to 18 employees.

Sure there were small business challenges, but the hard-working Trevino family had things covered.

There was nothing they couldn’t handle with a little elbow grease. That is, until COVID-19 hit.

“It all happened overnight,” Alex Trevino says. “We were watching the governor on TV, and the next day we were preparing everything for to-go orders. Then things would change. We would prepare for one type of service, and then they would take that away from us in a week’s time. We just didn’t know. There were too many inconsistencies for a business like ours to prepare for.”

The Trevinos immediately started cutting costs, including staff and operation hours. They started monitoring their air conditioner. They rushed to stores, competing with other owners to buy plexiglass barriers, personal protective equipment, social distancing markers, sanitizer, plastic plates and utensils and to-go containers. They prepared their restaurant for customer safety like never before.

But in all of 2020, “They gave us about a month with 25 percent indoor capacity,” Alex Trevino says.

The Trevinos, along with other local restaurant owners, transitioned to outdoor dining and to-go orders. But outdoor dining at Trevino’s meant dining on the sidewalk facing Main Street. All they had was a thin strip of pavement the city gave them permission to use during the emergency. Nevertheless, they invested in portable tables and chairs, umbrellas and canopies, and propane tanks and heaters for the winter months.

“Some days it would be a little busy, but other days it would be super slow,” Trevino continues. “City leaders were helpful. They closed down Main Street for about a month and we were able to expand to 15 tables in the middle of the street. It was a success for a time, but it didn’t last.”

A street closure on Main is a tricky business situation due to parking issues and the variety of mom and pop stores operating in the downtown area.

The Trevinos found themselves seeking out government funds from the Payroll Protection Program. “If it wasn’t for the PP funds, we would have closed down completely,” Alex Trevino says. “The grant money from Merced County also helped out a lot.”

By the end of the year, the restaurant’s normal annual revenue had been cut in half, and probably a little bit more.

Despite the losses, the Trevinos managed to give back to the community as has been their tradition in normal years. There is always a few local causes to support. In 2020, they delivered burritos to the entire Mercy Hospital staff. They also fed many local first responders throughout the year.

Small business restaurants are doing their part, the younger Trevino says, but things haven’t been fair.

“You see all these huge corporations who are making more money, but we are the ones who are the most impacted. … They keep point the finger at us and saying we are the super-spreaders, but the science does not support that. I speak for all of us in the restaurant industry. All we want is the same treatment as everyone else. Other businesses are allowed to put in safety protocols and meet guidelines. Why can’t restaurants do that as well? We met the guidelines from the start, and we still have them in place. But nothing has changed. If we don’t stand up, and do something about this, the lockdowns are going to cause us to lose our business. It’s not like we are trying to open up at full capacity. If we had 25 percent capacity, it would be something to get by and keep our restaurant going.”

Alex Trevino continues, “It’s either you sink or you swim, and right now we are treading water. And my dad is not a quitter. At the end of the day, we have to do what we can to survive. It sucks though. All this time and work to get where he is at. He came from Mexico to pursue the American dream. This is what he looked forward to, and now that he finally go through the hard work and dedication, they are telling him he can’t do business like he used to.”

Alex Trevino Sr. has a short statement for the governor of California if he would listen.

“Be honest,” he says. “Work with the small businesses.”

Alex Trevino Jr has a few more words for the top dog.

“Why is it OK for him to go out and eat at that expensive French Laundry restaurant. He’s the one putting out the rules that say you can’t gather at a restaurant with 10 or more people. So what did he do? He went in to a fancy place with more than 10 people from five different households — and no one was wearing a mask. And he’s suppose to be leading by example. Our state leaders are pretty much telling us that they are invisible to everything. They can do whatever they can while small businesses and families are struggling to survive.” 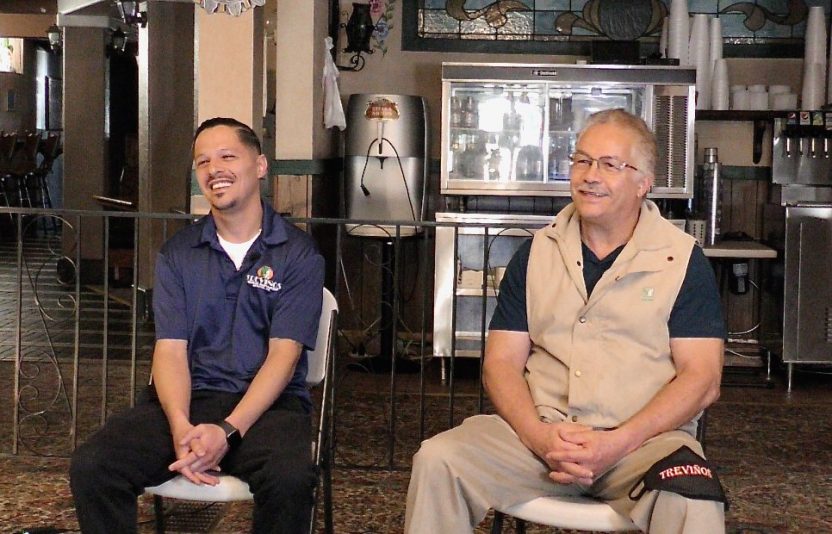 Alejandro Trevino Jr. and his father Alejandro Trevino Sr. talk to the Times inside their Main Street restaurant in early February. Their most pressing problem over the past year: State public health restrictions that mandate outdoor dining only despite changes and investments they made to keep their customers safe. 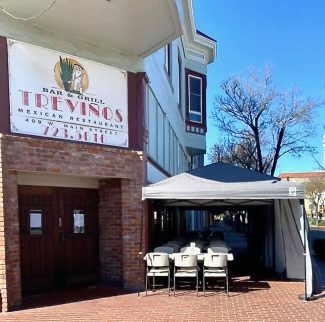 For a time, Trevino’s was able to put up to 15 tables on the sidewalk and in the middle of Main Street in downtown Merced. But outdoor dining proved to be a tricky business proposition for the family-style restaurant known for indoor dining. 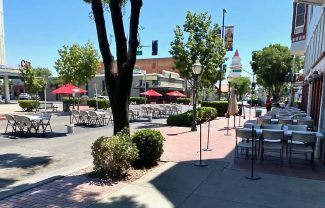 For a time, Trevino’s was able to put up to 15 tables on the sidewalk and in the middle of Main Street in downtown Merced. But outdoor dining proved to be a tricky business proposition for the family-style restaurant known for indoor dining.
closuresCOVID-19Downtown MercedMerced Countypandemicrestaurants

Will there be another covid surge in this region?

Big Smiles, Love For Country During Fourth Of July Parade!

Roof of one home destroyed; 71 citations issued across city