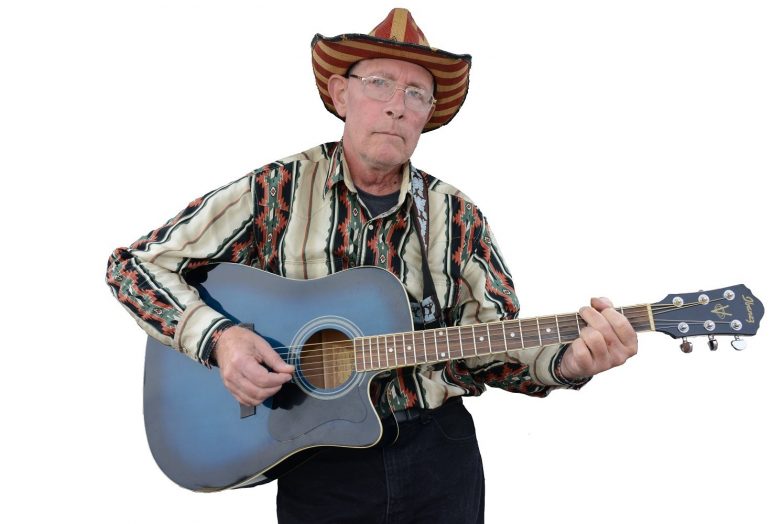 Randy Mortensen travels across the Central Valley and beyond to play classic country tunes for seniors living in care facilities. 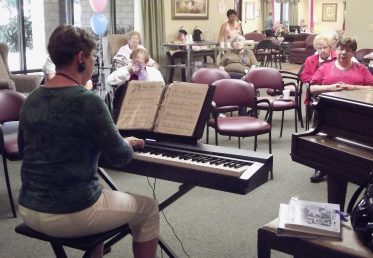 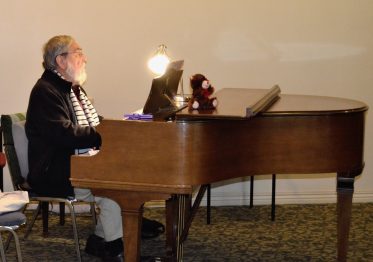 George Loscalzo, 87, is celebrating 20 years as a piano player at the Park Merced Assisted Living center.

Randy Mortensen is sitting in a booth at Country Waffles in Merced.

The 65-year-old entertainer is wearing a button-up southwestern shirt, and a red, white and blue cowboy hat.
There’s nothing but wheat toast on a plate in front of him, but there’s a glimmer of anticipation in his eyes.
He’s about to take out a nearly worn-out Ibanez guitar from his tired van in the parking lot, and get ready to play another country music show for what he considers the best audience in the world.

“I have a fan base that’s very supportive,” he says with a smile. “They are always there. I love these people.”
Mortensen is one standout among a variety of local performers who play music, sing and dance in an entertainment circuit that many residents might not even know exists.

Each day, these talented acts bring joy to hundreds of seniors living in nearby care centers.

“For me, this has turned into much more than playing music,” Mortensen says. “It’s a way of giving back. It’s a way of showing another person that somebody does care. And I don’t care what the facility is, or where it is, if somebody needs me to play, I will be there. It has become very important to me.”

That sentiment is no surprise to Kathy Van Alst, the activities director at Park Merced Assisted Living. She has a non-stop job maintaining a calendar of daily events, including individual musicians, bands, gospel singing groups, dance troupes and schoolchildren ensembles, among other programs to keep things lively and fun for senior residents.

“I think it’s a very enriching experience to have outside entertainers come in and visit,” she says. “They are very popular. Our residents get very excited when they know a show is about to start. They also see these entertainers as friends, and people they can talk to. They enjoy their company aside from the entertainment they provide.”

One great friend of Park Merced is 87-year-old George Loscalzo. He’s celebrating his 20th year playing the piano inside the main gathering room after dinner.

“I’m not much of a Jesus person, but I think the Lord wants me to do this,” says Loscalzo. “I enjoy playing music for them. Two of my customers have just celebrated their 100th birthday. … I hope to celebrate my 100th birthday playing the piano. That’s hard to believe, isn’t it? But I tell you my fingers still work better than my feet. I can play piano better than I can walk. … That’s no joke. It’s the truth. I think i’m blessed.”

Loscalzo started playing the piano as a young boy in 1941. He later graduated from the University of Oregon and became a math teacher in this area. Meanwhile, he continued his musical passion, and at one point became a member of the Barboza Brass Band led by Gilbert Barboza. After retirement, he started playing piano during meetings of the local AARP chapter, and then someone mentioned Park Merced.

“I play danceable music from the 1920s all the way to the 1970s,” he boasts. “I have about 10,000 pieces of sheet music, and I rotate the songs I play in alphabetical order. It takes me about 10 months to get through the entire alphabet, so to speak.”
Loscalzo says the piano he plays at Park Merced was donated to the facility some years ago from a family who knew he was going to be playing it.

“I have all kinds of friends from playing the piano,” he says. “I have pictures with them, and I also keep newspaper clippings of all the people who have passed. I love the lot of them. They are just beautiful people … best friends. … I always go to dinner at the facility so I can wave to all the people and remind them I will be playing. One time I was gone for three weeks during a Thanksgiving holiday, and when I finally showed up, everybody cheered. That made me feel good.”

Another senior entertainer who plays the keyboards is 74-year-old Marilyn Petersen. She hasn’t been playing as long as Loscalzo, but her sound system allows for accompanying music that makes it like she has an orchestra backing her up.
Petersen plays at four different senior care facilities in the Merced area every month. She’s also part of the music ministry at her church.

“I think these seniors are much more receptive to music than other audiences,” she says. “The songs I play go back to their youth in many cases. They may have first heard these songs as they listened to what their parents listened to. … The surprising thing is that even in memory care units, the residents will remember the words to a song, and they are able to sing along with me. I think that gives them hope and encouragement.”

The oldest song Petersen plays is “For Me And My Gal,” written in 1917.

“Sometimes you see people in wheelchairs, and they are not talking, or doing anything, but you can see their fingers moving to the beat of the music. And that’s really satisfying for me because you know inside themselves they are enjoying the music, and maybe enjoying some memory of the song.”

Back at the Country Waffles restaurant in Merced, the guitarist Mortensen knows exactly what Petersen is talking about.
“I was playing a facility in Modesto,” he recalls, “and they brought this lady in and it seemed like she was in a comatose state. There was no reaction to anything. They put her in the back of the room, and halfway through my performance, a couple nurses started to jump up and down. I found out later from the activities director that the lady’s index finger was moving up and down to the beat of my music.”

Music is the key, Mortensen says, especially for people living with Alzheimer’s.

“Music will trigger memories. Music has the ability to take you back in time to the exact moment that you first heard the song. You can remember exactly where you were, what you were doing and how you were feeling.”

These days, Mortensen plays for senior centers and retirement communities as far south as Fresno and as far north as Redding. After his Merced performance, he was looking forward to performing in Elk Grove, and then back to Madera, Los Banos and Newman.

Originally from Los Angeles, Mortensen moved with his family to Modesto in the 1960s. He started playing the guitar at the early age of 2. He ended up becoming a security officer for a major company and also a small businessman. He also had his own band back in the 1970s and they played out on the nightclub scene.

He says playing for seniors at care centers wasn’t something he had thought about doing. It wasn’t planned. It just sort of happened.

“My stepdad was diagnosed with colon cancer about 15 years ago, and he entered a facility in Modesto. He always enjoyed listening to my brother and I play music. So we would go in and play for him. Well others heard us play and soon they were asking us to go to other events and senior care facilities. It grew and grew and at one point we were playing five venues a day.”

Today, Mortensen plays his guitar and sings to small intimate audiences of just a few people, and sometimes dining halls filled with guests. However, he says there’s a big difference between playing for his senior audiences and when he was playing in nightclubs.

“You got Joe Blow sitting at the bar who is not interested in what I’m doing. I’m background noise. He is more interested in the lady sitting next to him, and the drink that’s in his glass. But these seniors really listen, and I feel much more appreciated. I feel like if I don’t show up when I’m suppose to, I will disappoint a lot of people.”

And with that, Mortensen finished his toast, strolled outside, got in his van, and drove off to the next gig in town.