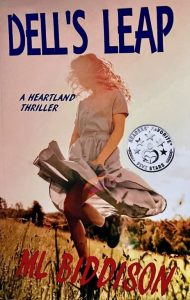 Merced author ML Biddison continues to develop his Red Mist Girl Series with the release of the fourth book, Dell’s Leap — perhaps the best one so far.

Part reflective, part imaginary, the Red Mist Girl Series is a whirlwind of action as the storyline follows the adventures of its main character Dell, the girl with no last name. All the books are stand-alone stories, and readers need not start from the beginning, although many characters and situations thread through the series. These are thrillers, not suitable for young children or the faint of heart.

Dell’s Leap follows Dell through her work as the town’s deputy and how she deals with the actions that follow a series of rail tanker bombings in the Dakota Plains.

The book was originally released in July of last year, and it has already garnered a five-star review from Readers’ Favorite, one of the most respected book review websites.

The Red Mist Girl Series takes place in the Northern Prairie, and although Biddison lives in Merced, he has utilized technology to his advantage by mapping out the settings of his story. Google maps has been at the forefront of the descriptions he uses throughout his novels, he told the Times, describing how he can scroll through roads upon roads of places he’s never visited.

So, how is ML Biddison — a self-described “man well beyond retirement age” — able to describe and take the reader through the complicated and action-packed life of a young woman navigating through life.

The author says, “The series is actually extrapolated from stories I’ve heard from four tough sisters my wife and I fostered for several years.”

The girls were sent to four different schools, and ultimately the two sisters remaining with them ended up being home-schooled because of difficulties encountered fitting into a normal social milieu in high school.

In the series, Biddison attempts to pay homage to their stories, while giving his hero even more onerous situations and greater means to cope than her real-life counterparts. While burdened with self-doubt, Dell is also forced to deal with enemies she attracts like barnacles along her journey. These are enemies who have made the mistake of underestimating this woman, and felt the power of her rejection.

The entire series — Dell’s Rage, Dell’s Luck, Dell’s Dilemma, and Dell’s Leap — are all available to purchase through Amazon in both paperback and for the kindle. You can find more information on the Red Mist Girl Series at redmistgirl.com and reach out to ML Biddison at [email protected]

Biddeson is currently working on a new novel which is a complete U-turn from the Dell stories. A mixture of historical fiction and fantasy, it features a modern male protagonist who finds himself stranded in the mid-1850s along the Colorado River. It is currently being serialized on Kindle Vella, a division of Amazon, where the story can be found under the working title “Plumb Out Of Time.”