Federal, state and local leaders help cut the ribbon for the completion of Segment II of the Campus Parkway Project. 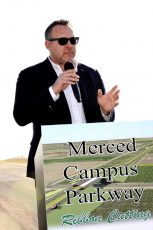 Assemblyman Adam Gray speaks to those gathered about how state funds were generated to develop the Campus Parkway Project in Merced. 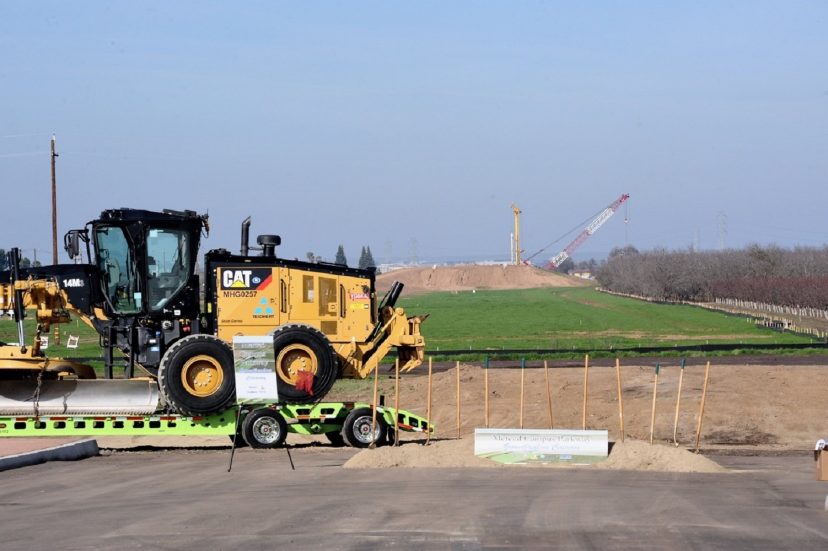 A look down the soon to be developed Segment III of the Campus Parkway Project that will stretch across rural land toward UC Merced. 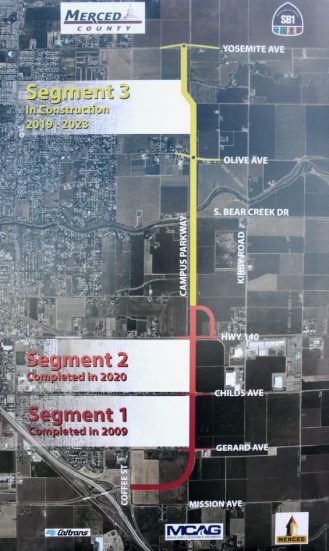 The Campus Parkway Corridor is part of Merced County’s Regional Plan to improve traffic circulation between Highway 99, the growing neighborhoods and retail centers of north Merced, and the UC Merced campus community.

Representatives from Merced County, the City of Merced, the Merced County Association of Governments, Caltrans and UC Merced were on hand for the big ceremony.

Gray said he was fortunate to “run into an opportunity to advance the public policy interests of the state while do something special for the local community.”

The Campus Parkway Corridor is part of Merced County’s Regional Plan to improve traffic circulation between Highway 99, the growing neighborhoods and retail centers of north Merced, and the UC Merced campus community.

Segment III is the largest portion of the project in terms of miles. It will extend the expressway north to Yosemite Avenue. This segment is expected to be complete by June 2023.

Campus Parkway is part of the larger “Merced Loop System” that circles the City of Merced and connects surrounding communities. The Merced Loop System is designed to reduce congestion, improve connection to existing highways and stimulate economic development opportunities.

Merced Mayor Mike Murphy praised the project, noting that the interchange at Highway 99 is targeted for a major retail center, and that there’s land nearby suited for a new industrial park for the region. He said the already approved development plans are expected to bring 4,800 jobs to Merced, along with some $250 million in direct and indirect investment.

Murphy added that Campus Parkway will connect to development along the Bellevue Corridor and the Campus Community that’s expected to create an economic center filled with new jobs and tech innovation.

In turn, UC Merced Interim Chancellor Nathan Brostrom noted that the university “continues to amplify the economic development of the great community of Merced, Merced County, and the surrounding region.”
Brostorm described the Campus Parkway Project as a symbol of “Merced and UC Merced rising together. …

“We are truly are a model of how a university and a community together can be even greater than the sum of its parts. Together we are building a future in the heart of California.”